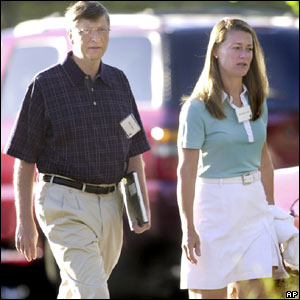 Bill and Melinda Gates do a lot of great humanitarian work. They also fund services that end nascent human life. But they say they won’t directly fund abortion.  The controversy continues…

You might think that donating $1.5 billion to global maternal and infant health would beget global cheering. Perhaps a small island named after you. Children given your name. Songs sung in your honor.

But nothing is so easy and apolitical. Nothing, especially, in the world of women’s health.

Last week, Melinda Gates promised that the Gates Foundation — known for its work on vaccines, HIV/AIDs and malaria — would be striding off into the future with a separate but related arm of work focusing on reducing maternal and infant mortality — two of the Millennium Development Goals. Pledging $1.5 billion over the next four years, Gates promised the funds would go toward pre- and post-natal care, infant care and nutrition. Integrated programs that teach “front-line” practitioners how to address multiple issues was a focus.

But there was one thing she didn’t touch on, and that silence has become the source of Internet musings, chatter, and even anger.

This is an interesting analysis, more in-depth and pointed than most on this issue. And at the end of this snip, there’s a very important line…a statement we never hear outside the pro-life movement:

Abortion-rights advocates see the issues of maternal health and abortion as inseparable. That line of reasoning posits: if, as the United Nations Population Fund states, 68,000 women die every year from botched abortions, and 20 times that number are injured during the same, women’s health must, necessarily, address the question of abortion. Providing funding without addressing this subject may be politically savvy, but practically impossible. Not to mention the fact that many women having abortions are already mothers.

That was intended to mean they have other children. But when a pregnant woman presents herself to a doctor, that physician has two patients. The smaller one already exists. And she is the mother.

This piece shows the contradictions of claims by both ‘pro-choice’ and pro-life advocates that the Gates Foundation takes an unacceptably opposing stance to their position on abortion.

Wrote blogger Christine Bronstein: “No one mentions that the Gates and their prolific fortune are anti-choice…

And yet pro-life groups are also deeply skeptical of the Gates Foundation. Google “Gates” and “Abortion” and you’ll find dozens of critiques (and worse) accusing the Gates Foundation of funding abortion and pointing out the foundation’s grants to the International Planned Parenthood Federation, which itself administers abortions and post-abortion care.

The Gates, says the piece, are trying to be apolitical on abortion. But even all the money and all the pull they have can’t buy them that luxury. At least the controversy around them is driving some incisive debate about true maternal and infant health.