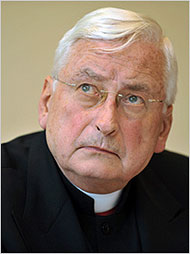 Every morning I receive in my inbox news headlines from Slate, an online  magazine owned by the Washington Post. I don’t think there has been a day in the past week that the editors have not stoked the fire of the Catholic sex abuse scandal — often by featuring the “abuse” story as the heading for search engines to pick up.

This morning’s serving is No. 4 out of 12, “Leading Conservative Bishop Offers Resignation Amid Abuse Allegations”, which sounds juicy enough. It’s a bit of a let-down though, because the AP story it refers to, faithfully published by the New York Times, is not about sexual abuse but about allegations that Bishop Walter Mixa of the Augsburg Diocese in Germany had hit some children decades ago.

Mixa has been accused of hitting children while a priest decades ago. He initially denied ever using violence against youngsters in a televised interview, but after intense pressure, acknowledged several weeks later that he may have slapped children years ago.

The television interview, by the way, was done by AP, which as we know, is going to flog this issue to death. The news service also discovered that “a special investigator has found financial irregularities at a children’s home under his responsibility around the same time as the allegations of abuse.”

Bishop Mixa has offered his resignation to Pope Benedict in the hope of allowing a new start for his diocese. He said he would cooperate fully with investigators and apologised:

”I ask the forgiveness of all those to whom I may have been unfair and to those who I may have caused heartache,” Mixa wrote, acknowledging that he was ”fully aware of my own weaknesses.”

AP concedes that there are no allegations of sexual abuse against him, but it throws in references to Bishop Mixa’s reputation as a “conservative” and a “key member” of Germany’s Bishops’ Conference, and to “frustration” among German Catholics with the church over the issue of “abuse”.

One of the themes of media coverage is linkage between conservatism and abuse. It features in the campaign against Pope Benedict himself.