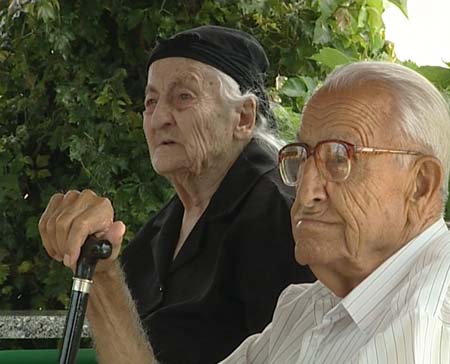 Are too many old people in Italy causing discrimination against young people? It seems the young can’t even get a foot in the door to the Italian mafia because all the top spots are taken by men going strong at 80. Not surprisingly, they are also finding it increasingly difficult to climb the corporate ladder.  The Economist reports:

Politics is the most visible one. The average age on taking office of Italy’s 11 prime ministers since 1990 was 62. Mr Berlusconi, the current incumbent, is 74. Cesare Geronzi, one of the great power-brokers in Italian business, was 76 when he was forced out as chairman of Generali, Italy’s biggest insurer, in April. His predecessor, Antoine Bernheim, left at 85. Journalism is little better: the same ageing columnists keep filling the op-ed pages in Italy’s main newspapers. Even Italy’s mafias are run by old men: Bernardo Provenzano, the boss of the Corleone mafia family, was 73 when he was arrested in 2006. The prize catch in a big operation last year against the ‘Ndrangheta, a particularly nasty group from Calabria, was the man thought to be its boss, 80-year-old Domenico Oppedisano.

How did the elderly get so much say, despite, one would assume, decreasing physical and mental power? Largely because young people are so scarce. “A typical Italian family these days”, says Enrico Letta of the Democratic Party, “has some great-grandparents, four grandparents, two parents and one child. This poor child has so many people planning its life, there is no possibility of it ever taking a risk.” The Economist further reports:

The government transfers money from young to old by spending 14% of GDP on pensions, a higher proportion than any other OECD country. Italy’s demography ought to hand a big advantage to the young who, thanks to a fertility rate of just 1.4 per woman (well below the rate required to hold the population steady), are becoming scarce. But instead of gaining extra bargaining power, they are blocked by gerontocracies everywhere.

This means that many young, well qualified Italians are leaving Italy for greener pastures, where it is easier to move up the career ladder. Not a great result for Italy’s economy.

Universities in America and Britain are full of Italian academics too ambitious to sit around for decades to get tenure in Italy. International bureaucracies such as the World Bank, IMF and OECD are replete with Italians wielding PhDs. Brussels is another escape hatch: Italy is a great provider of dedicated Eurocrats. Perhaps the single most damning indicator of Italy’s current economic health is that it is the only net exporter of graduates among rich European countries, something more commonly associated with developing countries than with developed ones.

Some have tooted immigration as a solution to Italy demographic woes. However, data published in late May by the Italian National Institute of Statistics (ISTAT) shows that in 2010, despite a population increase related mainly to the presence of immigrants, Italy reported another drop in the number of new-born children.  The result shows that the ageing population cannot be rejuvenated merely by the supposed high fertility of immigrants. Perhaps a return to more a more stable fertility rate among Italians is the answer?

On another note, in follow up to my last post on the potential commodification of babies, this column shows that it is a mindset less common than you might think.  Somewhat tongue in cheek (one hopes!) Shelley Bridgeman comments:

Prior to becoming pregnant I saw an obstetrician for his opinion on whether the fact that an artificial womb-tank for goat foetuses had been developed meant an artificial womb for humans would shortly be available…I’d have been mortified if I’d opted for the old-fashioned way only to discover all the other too-wimpy-to-be-pregnant types had their mini-mes incubating in a glass tank in the spare room.

I also contemplated hiring a third party to bear our biological child. After all, if a test-tube baby can be mixed in the lab then transferred into its mother, there was no reason it couldn’t be inserted into the womb of a professional baby carrier instead…

A mindset one hopes doesn’t carry much past casual humour! Would it even have been conceived of in the minds of our grandparents?