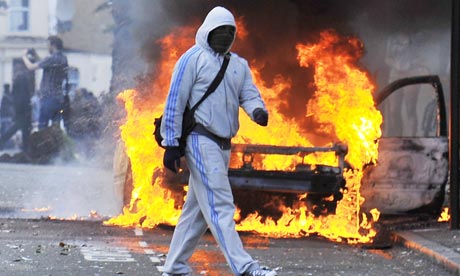 Remember the riots in UK cities last August? A panel appointed by the government to study the causes published a report today places a lot of the blame on lack of work opportunities for young adults, creating a sense that they have no “stake in society”. It also fingers poor parenting, school policies (about expulsion, for example), failure of the justice system to rehabilitate offenders (most of those prosecuted so far had a previous conviction), materialism, and suspicion of the police.

No surprises in that list, really, but it does raise questions about how those things are to be remedied. The government already has a Troubled Families Programme for the 120,000 families “bumping along at the bottom” of society, as the report describes them, but it seems most of the rioters didn’t come from those families.

Inevitably schools loom large in the report, which is concerned that kids are being excluded for the wrong reasons and then not provided with a “quality alternative”. The panel says:

“Every child should be able to read and write to an age-appropriate standard by the time they leave primary and then secondary school,” the report says.

“If they cannot, the school should face a financial penalty equivalent to the cost of funding remedial support to take the child to the appropriate standard.”

And that is not all:

It also urges schools to help children “build personal resilience” to help them avoid getting involved in future rioting. It claims that what often determines whether someone makes “the right choice in the heat of the moment” is “character”, which it defines as “self-discipline, application, the ability to defer gratification and resilience in recovering from setbacks”.

That’s all true, but… without any help from home? We know that the family as an institution is pretty run down in the UK, as it is in similar societies. Some 45 per cent of all births are outside marriage, and while many of these are to cohabiting couples, those relationships are also much more likely to break down. And the institutions that once gave the working class family a stake in society — work and the church — both seem equally absent from their lives.

Arguably, the church is the more fundamental influence — or should be — on values and behaviour, but internal weaknesses and external assaults from atheists and certain lobbies indicate that it may not be much help overall, just now. That can always change, of course.