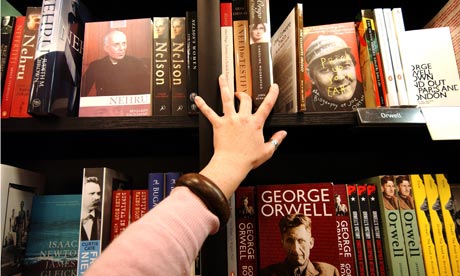 Okay, it’s not good news for someone who owns a bookstore and rejects online business. But if you want to encourage reading books rather than buying them in one particular way, you may find the news heartening.

Last time I looked at this topic, I was focusing on books as sold in bookstores. Dead tired at one multiple author book signing, I learned that customers were buying our books for their nephews or their pastors or whoever else they thought “ought to” read them. They themselves were “too busy” to read books.

As you can imagine, I wasn’t very ready to buy into a ”save the local bookstore” cause at the time.

But on further research, I am happy to report that the bigger picture is more promising. In many communities, the bookstore, whose numbers have declined roughly by half in recent decades, isn’t always where the action is any more. Yet people are still reading. In this column and the next, I hope to provide an outline of key changes and trends for those who read—and write.

At The Atlantic in 2011, Peter Osnosapr offered a look at how book publishing has changed since 1984, interviewing an old-timer.

A fateful year that, in literary symbolism, because, according to George Orwell’s highly influential 1949 book with that name, the world was supposed to be entirely run by totalitarian dictatorships by then. Even the English language was changed to Newspeak, to prevent independent thought.

In the actual 1984, of course, the vast Soviet empire was only a few short years from total collapse, and the book market was thriving. But it operated quite differently back then.

First, as Osnosapr recounts, in North America, it was only in the 1980s that book chains became prominent, as readers moved to new suburbs. Before that, books had mainly been sold in department stores. The new chain strategy included considerable discounting and limited selections, featuring bestsellers and “‘category’ books such as self-help, diet, and romance.”

Barnes & Noble and Borders began to dominate in the 1990s. But in the United States, full-service independent bookstores were still strong; one estimate suggests there were 3,500 full-service booksellers. They were valued because their enthusiasm could push a book into the bestseller range.

Book-of-the-Month Club and The Literary Guild had been staples of the 1980s, featuring millions of members, but chains and the Internet later reduced the need for their services. Today, such business models serve small niche markets.

The mid-80s also saw the rise of “quality” paperbacks, as opposed to the usual news depot racks of schlocks, spooks, shoot-em-ups, bodice rippers, cherry chomps, and frites. A book could be paperback and still be a quality read.

Then came the Internet, and where are we now? Now that the dust has settled, many books and readers have unexpectedly crawled out alive.

Publisher Timothy McSweeney offers some interesting stats, noting among other things that

According to Nielsen’s BookScan—a sales-monitoring service widely regarded as representing 70 to 75 percent of trade sales—Americans bought 751,729,000 books in 2010. Excepting 2008 and 2009, when sales reaches 757 million and 777 million, respectively, that’s many millions more books sold than in any other year BookScan has recorded. (Five years earlier, in 2005, the total was just 650 million.)

And are e-books killing books? McSweeney recommends caution about taking giant Amazon figures as a trend because “Amazon is an internet company, and it follows that their sales would favor electronic delivery of text.”

I would add that the rise of chain thrift shops like Value Village and frequent library and lawn sales may mean that posted stats on who reads books are understated.

On a personal note, I usually buy resale children’s books, so that my children need not be embarrassed by what my grandchildren might have done to them. Put another way, I would certainly want my grandchildren to treat the books with respect, but Grandma did not starve for three whole weeks so that they might have them. 😉

Now, just because the Internet hasn’t killed the book, we should not conclude that it did not make any difference to it. It certainly did, and we will look at that next.

Next: Good news! Internet worse for bookstores than for reading, Part II: (The Internet changed how authors and readers find each other)