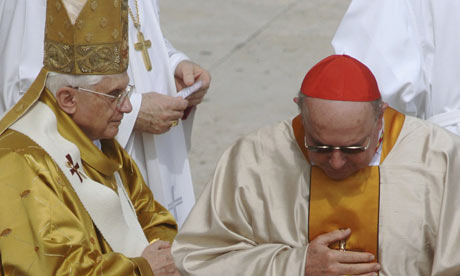 An emerging “meta-narrative” about the Catholic sexual abuse scandal goes like this: The scandal is the fruit of a morally conservative, inhuman power elite in the Church. This top hierarchy will overlook any abuse or crime rather than admit the Church needs changing. This is the Bad Catholic Church, which is out of step with grassroots Catholics, especially some courageous priests and religious. These guys, the Good Catholic Church, know that it has to discard its ideas about contraception, abortion, gay sex, celibacy for priests, and embrace modern sexual ethics.

This is idea is found, for example, in The New York Times’ articles on senior American clerics and the Pope. We know that the Times (or at least the lawyers who have the Gray Lady’s ear) is gunning for the Pope, so anyone who defends him or seems favoured by him is suspect. Thus Archbishop William Levada, whose record on the abuse issue is presented as patchy, is described as a “good friend” of Pope Benedict, and Archbishop Timothy Dolan, though portrayed in a more subtle light, “has used his influential post to defend Pope Benedict XVI from criticism that he was slow to move against priests.” Stories in various papers about European and Vatican clerics have also carried this theme: the guys with the most power are all tainted with the scandal.

As I’ve noted before, there seem to be two Catholic Churches, the old boys’ club of the Vatican and the grass-roots network of humble priests, nuns and laity in places like Sudan. The Vatican certainly supports many charitable efforts, and some bishops and cardinals are exemplary, but overwhelmingly it’s at the grass roots that I find the great soul of the Catholic Church.

It also mars an otherwise fairly good and objective summary of the particularly scandalous Fr Marcial Maciel case in the New York Review of Books blog this week. The article ends by lumping Pope John Paul and Pope Benedict together with Fr Maciel and fellow Legionaries as representing “the most morally conservative part of the Church”:

In the end, the scandal of Marcial Maciel, gruesome and ribald as it is, will turn out to be of much greater significance to the Catholic Church than the isolated terrors inflicted on their victims by one or another European or U.S. bishop or priest. There is the distressing question of the Church’s last Pope, the popular John Paul II, and his relations with the demonic priest. There is the not unimportant fact that the Legionaries—along with Benedict XVI and indeed John Paul—represent the most morally conservative part of the Church, and that they now appear enmeshed in the most squalid moral scandal it is possible to imagine. There is, above all, the fact that an entire, large, wealthy, international institution is now under suspicion (what did Maciel’s fellow Legionaries know, when did they know it, and who was complicit?) and that the greatest institution of all, the Roman Catholic Church, appears to have engaged in a cover-up for decades on its behalf. Catholics who always assumed that a priest and Bing Crosby were more or less identical will need some time to adjust to this knowledge.

But there is the also the question of the future of the Church and of its priests and nuns as sexual beings. It is not necessarily cheap psychology to speculate that extreme sexual repression of the sort imposed by the Church on its members leads to perversion, an issue that has surfaced importunately for the last millenium. Many religious, it would seem, opt to “obey” rules but not comply with them, as the Spanish formulation has it (“obedezco, pero no cumplo”). I offer this simply as anecdotal evidence, but in my casual, friendly, and often admiring acquaintance with members of the Catholic orders—all from the social activist branch of the church, for whatever it’s worth—a remarkable number have been involved in some sort of couple relationship.

I once attended a major church festivity in a small town at which several of the priests and nuns who arrived to concelebrate Mass were openly, and even defiantly, there with their partners, either homosexual or hetero. In 1979, at the time of John Paul’s first visit to Mexico, I had a conversation with a progressive Spanish priest who lived with his partner, a middle-aged woman, about the split life he lived. Why, I asked, didn’t he leave the Church if so many of its norms violated his own convictions and desire for honesty? I remember his saying, in effect, that the possibility of doing good within an institution as enormous and influential as the Church was greater that the chances for doing good outside of it. Perhaps that equation is changing.

You can’t rubbish the whole of a church as big and as representative of humanity as the Catholic Church is; it would not look impartial; indeed, it would be irrational. So you do the next best thing; you divide it — and hope it will that way be conquered and reduced in its influence.