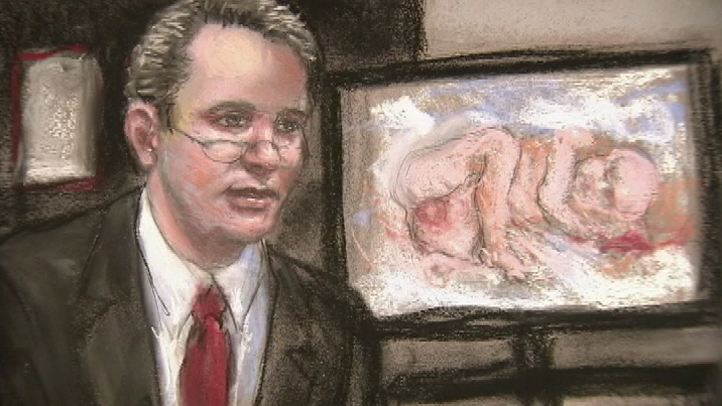 That is the truth underlying the law that became a movement and an industry, and along the way a culture of abortion. Once the logic is accepted that an entire class of human beings can be deemed ‘unworthy of life’ at the discretion and ‘choice’ of another class of human beings (this is the essence of the whole thing), that logic by extension will grow into disregard for the sanctity of human life itself and the dignity of individual persons no matter what their state or class or race or ethnicity or sexuality.

This is the public debate we should have been having for a very long time, but weren’t. People were too dug in to their beliefs and causes, pro-life or ‘pro-choice,’ and we weren’t having a robust public debate.

And why designate ’pro-choice’ with single quotes? The language around this topic and issue has been so emotional and political and agenda-driven for decades, media style manuals even changed their terminology so that pro-life advocates would always be referred to as something like ‘anti-choice activists’ or ‘abortion opponents,’ so as to define them by what they oppose (the taking of human life) rather than what they defend (human life). But the playing field hasn’t been level, because the prefix ‘pro’ and ‘anti’ have been disingenuously applied.

However, the trouble with ‘pro-choice’ is that every time a state has advanced legislation to pass informed consent laws for abortion clinics, the abortion industry – usually Planned Parenthood and NARAL – fight it immediately and vigorously. Informed consent is required in medical facilities for every other procedure, why not abortion? Only when the woman is given full information about the procedure and risks can she honestly be given a choice. Otherwise, there’s only one conclusion validated by the abortion movement, and that’s not necessarily a choice.

When Abby Johnson left her position as executive director of a Planned Parenthood clinic in 2009 after seeing an ultrasound guided abortion, and wrote about it in her book UnPlanned, we learned more about what goes on inside abortion clinics. The pro-life movement has revealed much over the years already, as have women who have suffered consequences from their abortions without being informed in advance that they might. We’ve had lawsuits, books, ‘Silent No More’ and other awareness initiatives, but have not generated a robust public debate with abortion activists about the heart of their movement as they advanced it successfully, even getting the highest and most powerful politicians to promote and defend their cause.

Now we have the indefensible. Abortionist Kermit Gosnell has been well known to the pro-life world for the past three years at least. His Pennsylvania abortion clinic had been raided on suspicions of specific charges but authorities found what they dubbed a ‘house of horrors’ and it was so much worse than a civilized mind can or should be able to fathom. Two weeks ago, in the fourth week of what has been a notorious trial, the media still weren’t paying attention, which had to be for politically loaded, ideological reasons. There was so much at stake for the cause of abortion to let the public know how horribly wrong the abortion license had gone. By Friday of that week, the pro-life media launched a social media effort to shame big, elite media into covering the story. Some did.

The gruesome trial of an abortion provider resumes in Philadelphia Monday. The doctor, Kermit Gosnell, is charged with killing a female patient and seven babies.

Gosnell’s name may not be familiar, and that makes some abortion rights opponents angry. The case has suddenly become a political firestorm.

This week, prosecutors will continue to call witnesses as they seek the death penalty against Gosnell. So far, several patients and about a half dozen former employees have testified about the conditions at his clinic.

I’ll get back to the call for the death penalty. But first, what were those conditions at his clinic?

…inside Gosnell’s Philadelphia abortion clinic, law enforcement encountered a grisly scene. The clinic has been described as a “house of horrors,” filled with stray cats and animal waste, with 47 fetuses piled into a freezer. Prosecutors say that this routine drug raid became something much more serious.

The doctor has been charged in the murder of a woman during a botched abortion, as well as the murder of seven babies born alive.

The allegations stunned the city. An established clinic, operating for more than 30 years and drawing patients from across the country, was, prosecutors allege, a “house of horrors” where Gosnell performed illegal late-term abortions after 24 weeks and murdered babies who survived the procedure.

The conditions inside the clinic — graphically detailed in the grand jury report — were squalid: unsterilized equipment that infected women with venereal disease and untrained workers performing procedures and sedating patients.

This deserves more coverage, says Chicago Tribune columnist Dennis Byrne, and he gave it some.

“(T)he truth was evident to anyone who stepped inside. The clinic reeked of animal urine, courtesy of the cats that were allowed to roam (and defecate) freely. Furniture and blankets were stained with blood. Instruments were not properly sterilized. Disposable medical supplies were not disposed of; they were reused, over and over again. Medical equipment — such as the defibrillator, the EKG, the pulse oximeter, the blood pressure cuff — was generally broken; even when it worked, it wasn’t used. The emergency exit was padlocked shut. And scattered throughout, in cabinets, in the basement, in a freezer, in jars and bags and plastic jugs, were fetal remains. It was a baby charnel house.”

The indictment by the Philadelphia district attorney’s office described how Gosnell often did late-term abortions on “live, breathing, squirming babies. By 24 weeks, most babies born prematurely will survive if they receive appropriate medical care. … Gosnell had a simple solution for the unwanted babies he delivered: He killed them. … He called it ‘ensuring fetal demise.’” He ensured that by “sticking scissors into the back of the baby’s neck and cutting the spinal cord. He called that ‘snipping.’”

The indictment called his practice “murder in plain sight.” “Boy A” was nearly 6 pounds, the son of a 17-year-old mother almost 30 weeks pregnant. Presented with a living, breathing infant after inducing labor, Gosnell, as was his practice, severed the spine and “put the body in a plastic shoe box for disposal. The doctor joked that this baby was so big he ‘could walk me to the bus stop. ‘” Baby Boy B’s body was found frozen in a 1-gallon spring water bottle. Baby C was moving and breathing for 20 minutes before an assistant cut the spinal cord.

Here’s the grand jury report. Read it if you can. If you can’t and you’re ‘pro-choice’, consider the ‘abortion rights’ position and license. That’s a difficult but necessary exercise for people who hold those views.

Here’s some for pro-life people. Because this is a case where the rubber meets the road, and Dr. Robert P. George knows how to challenge thought processes in an exquisitely unique way.

Abortionist Kermit Gosnell is facing the death penalty if he is convicted of the murders for which he is being tried in Philadelphia. Surely, the heinous acts of which he stands accused are depraved. They probably meet the criteria for capital punishment under Pennsylvania law. However, in the event that Gosnell is convicted, which seems likely, I am asking my fellow pro-lifers around the country to join me in requesting that his life be spared.

Someone might make the case for mercy by pointing out that Gosnell merely carried out the logic of the abortion license that is enshrined and protected in our law. One might note that there is no moral difference between dismembering a child inside the womb (which our jurisprudence, alas, treats as a constitutional liberty) and snipping a child’s neck after he or she has emerged from the womb (potentially a capital offense). How can our legal system impose the death penalty on Gosnell, given the arbitrariness and irrationality of the underlying law?

But that is not the fundamental reason for our asking for Gosnell’s life to be spared.

Kermit Gosnell, like every human being, no matter how self-degraded, depraved, and sunk in wickedness, is our brother—a precious human being made in the very image and likeness of God. Our objective should not be his destruction, but the conversion of his heart. Is that impossible for a man who has corrupted his character so thoroughly by his unspeakably evil actions? If there is a God in heaven, then the answer to that question is “no.” There is no one who is beyond repentance and reform; there is no one beyond hope. We should give up on no one.

If our plea for mercy moves the heart of a man who cruelly murdered innocent babies, the angels in heaven will rejoice. But whether it produces that effect or not, we will have shown all who have eyes to see and ears to hear that our pro-life witness is truly a witness of love—love even of our enemies, even of those whose appalling crimes against innocent human beings we must oppose with all our hearts, minds, and strength. In a profoundly compelling way, we will have given testimony to our belief in the sanctity of all human life.

He knows a lot of pro-life people won’t agree with this request in this case.

I do not expect my request to be met with universal acclaim. Given the horrific nature of the acts of which Gosnell is accused, it is understandable that some, perhaps many or even most, will believe that this is not a case where mercy is appropriate. They will not want to join me. I understand.

However, I ask everyone who reads these words to consider the matter carefully and prayerfully. In 1994, I had the honor of representing Mother Teresa of Calcutta as her Counsel of Record on an amicus curiae brief to the Supreme Court of the United States asking the justices to reverse Roe v. Wade. In connection with that project, I learned that this was not Mother’s first intervention in American courts. On a number of occasions, she had asked judges to refrain from imposing the death penalty on a defendant convicted in a capital murder case. She did not question the defendants’ guilt, or even the justice of the death penalty. Her plea was always a plea for mercy.

By asking for mercy for Kermit Gosnell, we defenders of human life in all stages and conditions have the opportunity to follow the example of the greatest pro-life witness of the 20th century.

We’ll see where this goes. It’s potentially a watershed moment.