The Pimping of Prostitution: Abolishing the Sex Work Myth, by Julie Bindel. Spinifex, 2017

In 2003, New Zealand became the first country in the world to decriminalise its sex trade. I remember where I was when the Prostitution Reform Act passed into law. I was midway through a politics degree at the University of Auckland, so naturally, I was sitting at a café weighing in on what was deemed at the time to be a “modern” and “progressive” law change.

While I was firmly against legalisation, my opponents subscribed to a “harm reduction” philosophy. They argued that progressive legislation focused on regulating brothels, asserting that when the “industry” is regulated, abuse and violence can be effectively curbed. Regulation, so the argument goes, reduces stigma and prostitution can then be treated like any other form of work.

Unbeknown to anyone at that table, on the other side of the world, in Sweden, they had passed a substantially different piece of legislation two years earlier. It would come to be known as the Nordic model. Advocates of this system adopt a stance of “harm elimination”; prostitution, they argue, is innately harmful and needs to be abolished, just like any other form of violence against women or slavery. 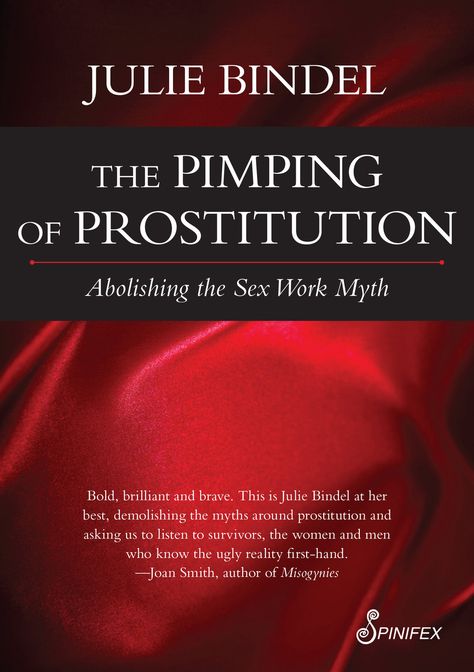 Twenty years on prostitution remains one of the most hotly contested social issues of our time; lawmakers, human rights activists, and politicians cannot agree on a way forward. It is high time to start asking the hard questions, and journalist Julie Bindel has done just that in a new book from Spinifex, the Australian feminist publishing house. In The Pimping of Prostitution Bindel offers a no apologies account of the failed experiment that is the legalisation of prostitution in New Zealand, in Holland, Germany, the US and Denmark, to name only a few of the countries that have taken this path.

What is unique about her account is that, by and large, it centres on the testimonies of women (and men, although in far fewer numbers) who have first-hand experience of “working” in the sex trade. No perspective or opinion is off limits. Bindel has travelled to 40 countries (and numerous cities and towns) talking to madams, pimps, academics, human rights activists, brothel owners and capitalists, as well as “johns” (those who buy women’s bodies for sex). These testimonies are enriched through her skilful use of current literature and evidence.

Contrary to the belief that prostitution is merely another choice and an expression of sexual freedom, survivor accounts offer a strikingly different reality. What Bindel unearths is that rape, abuse, and violence have not ceased with regulation – in fact, the environment has become significantly worse. As Huschke Mau, a survivor of the German sex trade relays:

“What’s being sold as a paradise is only a paradise for sex capitalists – pimps, human traffickers, brothel owners who charge extortionate daily room rates for the women – who get to act out all their violent fantasies for increasingly low rates. The only ones NOT benefitting from all of this are the women. For them, it’s a hellhole (p.89)”

Regulating the “industry”, Bindel contends, has not improved the lives of prostituted women; rather it has turned the pimp into a manager. There is no evidence of a decrease in violence, HIV rates or murders of women in the legal sex trades. And, under regulated regimes, when violence does occur, it is reframed as an occupational hazard. Bindel quotes Sabrinna Valisce on the effect of regulation in NZ:

“within a space of a year the johns got more violent and had greater expectations. They thought they could do whatever they wanted, thought they had bought your body. I had never had someone say “’I paid for your body and I can do what I want’ until decriminalisation.(p.141)”

There is evidence, however, that the rights and freedoms of prostitutes that lobbyists claimed would come from legislation and decriminalisation were transferred to brothel owners and sex buyers. Chelsea, a young woman prostituted in the legalised brothels of New Zealand, attests:

Demand for prostitution, however, has increased, along with trafficking of women and girls, and, contrary to popular belief, the illegal brothel sector has flourished under regimes that adopt a harm minimisation approach. Simon Hagström, a police inspector with the Stockholm Police Prostitution Unit since 2009 told Bindel:

“you have traffickers and pimps who want to make money. Who has the money? The sex buyers. If we remove the sex buyers then there will be no money for organised crime.

In Sweden, this is exactly what has happened – criminalising the buying of sex has halved prostitution rates, and decreased human trafficking rates to around 500 per year (a fraction of the rate among Scandinavian neighbours).

One of Bindel’s most fascinating chapters – appropriately entitled “The Invisible Man” – focuses on the behaviours and attitudes of men who buy sex. Bindel argues that these men have been allowed to remain faceless perpetrators for too long. She unmasks them by summarising key studies on sex buyers, and includes findings from her own research where she interviewed 103 men who have bought sex in the U.K. Her findings are telling; she provides direct quotes from men in which recurring themes of objectification, sexism, and abuse emerge. Comments from johns included:

“I made a list in my mind. I told myself that I’ll be with different races e.g Japanese, Indian, Chinese…Once I’ve been with them I tick them off the list. It’s like a shopping list.(p.132)”

“On his worse experience paying for sex ‘Very moody girl…she was being forced to do it, mechanical, having sex with her was frustrating. These things give you a feeling of a waste of money.’(p.132)”

Bindel also summarises findings around client reporting of coercion and trafficking, deconstructing the idea of the “ethical john”. Campaigners against trafficking claim that the best defence against forced prostitution is the sex buyers themselves; legalisation leaves them free to report cases of coercion and trafficking. Research, however, suggests that sex buyers not only tend not to report suspected coercion but are also willing to complete the sexual act, believing that they have a right to what they paid for.

Bindel’s own study revealed that 55 percent of men interviewed said they were aware that “most of” the women they bought were trafficked, pimped or otherwise coerced. This is supported by other studies, notably that done by Bridget Anderson and Julia O’Connell Davidson – both fierce opponents of criminalising sex buyers –that reports that most men who buy sex are aware of and have witnessed exploitation, coercion and trafficking, but that this does not affect their decision to buy sex.

Bindel’s work is not an easy read – it’s real and raw. I believe it needs to be; many people seem to have become so casually complacent about this issue that the only way to awaken them from their slumber is by relaying such first-hand accounts of the brutal realities of the sex trade.

Bindel’s work is premised on Marxist feminism, tracing the root cause of prostitution to capitalism and patriarchy. While I am appreciative of work that Bindel has done, I believe that a dialectic account of the relationship between man and woman has its limitations.

What emerges clearly from Bindel’s work is that men who buy sex believe that it’s OK to objectify women in the most abject ways. But there are important questions she does not address.

Have these behaviours escalated from other forms of objectification notably pornography?

What is the impact of a society that reduces much of our human experience to sexual experience?

How does the absence of a father during childhood and adolescence, so common today, affect a man's developing masculinity?

And let's not forget that men also experience negative consequences from using prostituted women: family and marriage breakdown, and an inability to form healthy relationships with women, to name only the most obvious.

These issues need to be addressed if we are to eradicate abuse and allow for men, as well as women, to develop a mature understanding and use of their sexuality.

I applaud the work of those working in johns programmes to prevent re-offence – evidence suggests that it is effective – but surely there must be measures we can put in place to prevent the first offence.

As I read Bindel’s work, the image of Gilead from Margaret Atwood’s A Handmaid’s Tale kept emerging. While others have drawn links between Gilead and other social issues, I couldn’t help but think that the real handmaids are women who sell sex, under regulation. In the book, those outside of Gilead believe the handmaids have freely chosen the life that they live – a life where they suffered extreme forms of violence, rape, and abuse. No one is willing to help them leave – the handmaids are a necessary evil.

While we’ve been quick to liken Margaret Atwood’s fable to the white, Western, upper-class struggle for gender equality, we have neglected the true handmaids of our time.

Julie Bindel is courageous and unrelenting in her advocacy and activism for those involved in the sex trade, and her book – rich in testimonies, scholarship, and her own experience – is a welcome addition to the mounting case against the legalisation of prostitution.

Pauline Cooper-Ioelu is an academic in the area of educational innovation at the University of Auckland, New Zealand. She has an interest in radical histories including trade unionism and feminism.

none More by Pauline Cooper-Ioelu