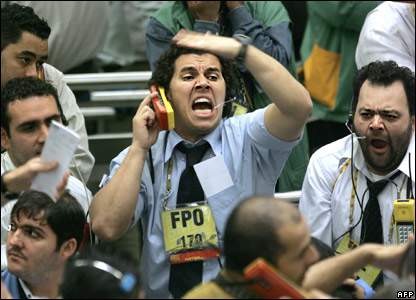 Many assert that the ongoing financial crisis was caused by rampant capitalism and free-market economics. I disagree – not because I'm a hard-nosed conservative or a reckless libertarian, but because it's the conclusion one reaches by a reasoned analysis of the facts.

There are at least three distinct but related reasons for the crisis: the culture of greed and consumerism, irresponsible monetary policy, and misregulated financial derivatives. Are they rooted in free-market principles? Let's see.

It may be argued that greed and consumerism is potentially related to some forms of capitalist ideology. However, "capitalist" or "free markets" are words which are used in many ways, as John Paul II explained in his encyclical letter Centesimus Annus.

It is one thing — and very problematic — to extol greed and to claim that market forces necessarily create good out of evil. But it is different to demand, as most advocates of free markets do, that the government should abstain from intervening in the voluntary interactions of individuals and families except in cases of clear need and manifest injustice.

One might argue that more intervention is needed to curb the excesses of the advertisement culture. Not only would this be compatible with free markets in a wide sense of the word, but it might also be necessary in order to promote genuinely free choice, by both adults and adolescents, which is based on reason, not instinct.

How about irresponsible monetary policy? It may be argued that such policies are part of capitalism, but that is questionable. As the economist Jesús Huerta de Soto explains in his book Money, Bank Credit, and Economic Cycles (2006), inflationary monetary policies are not a natural consequence of free markets, but of government meddling with money and banking:

"[T]he central bank did not emerge spontaneously as the result of market institutions, but was forcibly imposed by the government and responds to the demands of powerful pressure groups… [T]he current financial system rests on a monopoly; one government agency holds on the chief decisions regarding the type and quantity of money and credit to be created and injected into the economic system. Thus it constitutes a financial market system of 'central planning' and therefore involves a high level of intervention and is to a great extent 'socialist.'"

It is true that some advocates of free markets (think of Milton Friedman) might have been happy with Greenspanite monetary policies.

But their failure to grasp their intellectual inconsistency cannot be blamed on markets.

What about the misregulation of complex financial instruments, such as the infamous over-the-counter credit derivatives? On this point, I agree that the law failed to regulate them properly. However, no advocate of free markets would say that the law should promote dishonesty.

In his eye-opening account of the history of financial derivatives, Infectious Greed (2003), law professor and former investment banker Frank Partnoy explains how regulators were over several years pressured by special interest groups to adopt lax rules which paved the way for the present crisis:

"There were numerous instances of the differential treatment of derivatives and equivalent financial instruments: stock options were accounted for differently than other compensation expenses, prepaid swaps and other off-balance-sheet deals were recorded differently than loans, over-the-counter derivatives were exempt from securities rules applicable to economically similar deals, and swaps were regulated differently than equivalent securities. The result was a split between perceived costs (the numbers reported on corporate financial statements) and economic reality (the number reported in incomplete or misleading footnotes, or not reported at all)."

It is true that some advocates of free markets were champions of the unregulated derivatives markets. However, the misregulation of derivatives markets was economically inconsistent, and promoted financial practices which were practically equal to lying and cheating.

Partnoy raises a related issue: the failure of public authorities to prosecute and punish complex financial fraud. In the years and events leading to the present crisis, numerous illegalities have been committed, and law suits are beginning to pile up. But as far as past history is concerned, most individuals committing such illegalities have either gone scot-free or received a mere slap on the cheek.

A central function of law is to educate citizens in virtue. Not all vices should be prohibited, and just like in the education of children, the right mixture of rules and sanctions depends on the moral qualities of the people. In Wall Street, the culture of greed and the presence of strong financial incentives to engage in dubious practices should be countered by stronger sanctions. The failure of existing laws to prohibit and punish blatant acts of injustice has been fostering a law of the jungle.

In addition to stronger prosecution, Partnoy recommends moving from clear but narrow rules to broader standards in financial markets regulation. Broad standards are not only more difficult to avoid and exploit, but they would also help encourage a culture of honesty.

Various reforms are needed, but they do not consist in heavier taxes and more industry regulation. Big government will only make it more difficult for economies to adapt to the crisis situation. We must tackle the problem at its roots by defending basic principles of justice and honesty.

Trained in economics and law, Oskari Juurikkala is doing a PhD on the problems of financial markets regulation. He is the author of Pensions, Population, and Prosperity (Acton Institute, 2007).