'Everything happens on a walk in Jane's novels' 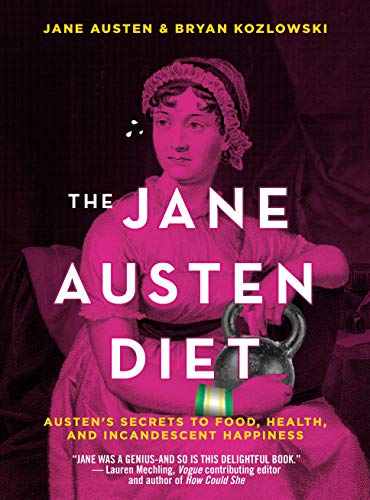 Two hundred years after her death, Jane Austen has an enormous fan club, and among the most ardent Janeites her six completed novels are akin to sacred texts. Read closely, and perhaps regularly, they yield not only literary delights and happy endings but life lessons, a way of being in the world that inspires imitation.

This is how Bryan Kozlowski’s ingenious and edifying book, The Jane Austen Diet, came about. Approaching his 30th birthday, the classically trained Florida chef and self-styled “lit-wit” (he has also compiled a lexicon of Dickens’ vocabulary) was feeling decidedly frumpy and turned to health and wellness literature for the latest tips.

Kozlowski kept a set of Austen’s novels handy for light relief, but soon discovered that she had cracked the code of health and wellbeing before the Battle of Waterloo. Her books were simply littered with clues to “what makes people happier and healthier in mind and body” and he came to a stunning conclusion: practically every idea about wellness that today’s scientists have come up with can be found in the pages of Pride and Prejudice et al – only in a far more persuasive form.

Austen’s work contains the word “health” more than 100 times, a rate above average for romance fiction, Kozlowski asserts. In fact, the novel she left unfinished at her death at the age of 41, Sanditon, is set in a seaside health spa. (Britain’s ITV is about to launch a television series based on it but, alas, it does not appear something for Austen fans to look forward to.)

The fact that we’ve never noticed this theme shows how naturally the concept goes with her ideas about happiness and romance. It’s not about unnatural things like low carb or paleo diets, working out at the gym or going to yoga classes; rather it is about “habits of life” (Jane’s words) that either weaken or improve what’s naturally there to begin with.

You can learn much more than you ever need to know about Regency eating habits and modern research from the Jane Austen “Diet”, but let us just focus on some key habits that increase health and happiness all round.

Jane, according to Kozlowski (drawing on her letters and other biographical material as well) liked her meat, bread (especially thin buttered toast) and seasonal garden produce, her (small) glass of wine and her cups of tea as much as the rest of us. But “I eat my meals … in a rational way,” she is quoted as saying. To keep a proper relationship with food requires a certain detachment.

Guests can rave over the roasted haunch of venison that crowns Mrs Bennet’s dinner party for Bingley and Darcy at the end of P&P, but, on the whole, one should treat food with “a proper air of indifference”. “It is all the same to me what I eat,” says Catherine Morland in Northanger Abbey. And Lizzie Bennet cuts short a discourse by Mr Hurst on the giddy delights of French “ragout”.

Healthy food detachments are only possible, paradoxically, when you’re eating enough. Jane told her sister Cassandra in 1813, “an empty stomach” is not “the most favourable for Love.”

Most important, though, is eating in company, which fosters moderation and cements relationships. Apparently, there are only two instances in Austen’s novels of a character eating alone. On the other hand, Mrs Bennet boasts that “we dine with four-and-twenty families” in their district, and Kozlowski suggests that a regular sitting at the Bennets' table would be 14.

“I won’t beat around the shrubbery,” writes Kozlowski. “Everything happens on a walk in Jane’s novels: Darcy proposes to Elizabeth on a walk; Marianne meets Willoughby on a walk; Lucy drops the I’m-engaged-to-Edward bomb on a walk … Anne Elliot and Captain Wentworth hook up again on a walk.” Walking is often social, but solitary early morning excursions are also stimulants of “natural cheerfulness.”

In the mock-gothic environment of Northanger Abbey the household parades up and down in the pump-room for an hour every morning, “looking at everybody and speaking to no-one.” (Today’s gym or exercycle workout?) The healthiest characters in “Austenworld”, however, simply walk to where they are going (Lizzie trudging through muddy fields with gusto on her three-mile walk to Netherfield), move about as duty calls, or, when nothing else is possible “take a turn” around the drawing room. And of course, they dance whenever the opportunity presents itself.

Kozlowski reckons that it wasn’t unusual for a Regency person, going visiting or walking to nearby villages – plus milling about the house – to clock up about seven miles in one day. Jane herself was “a desperate walker” and she loved dancing:

“It may be possible to do without dancing entirely,” says Austen, “but when a beginning is made—when the felicities of rapid motion have once been, though slightly, felt—it must be a very heavy set that does not ask for more.”

Here’s encouragement for those trying to get us out of our cars today, and for the revival of something more natural, though still vigorous, than what passes for dancing in the 21st century.

“I believe in a true analogy between our bodily frames and our mental,” Austen wrote at the end of her life. Fresh air, sun and movement were essential to both.

Austen’s novels are about nothing if not happiness – not just achieving the happiness of true romance, but about being happy, or at least calm, whether Mr Bingley loves you or not; whether your relatives are kind to you or not; whether spinsterhood looms or not. Body and mind reflect each other but it is the mind that must take control. In adversity, cheerfulness is a question of mind over matter, or feelings.

Thus the theme of Sense and Sensibility, in which Elinor masters her disappointed feelings and stays calm while her sister Marianne gives vent to her sorrows and goes into physical decline. Thus also, when left in limbo by Mr Bingley, Jane Bennet’s “good sense” helps her “check the indulgence of those regrets which must have been injurious to her own health.” “Think only of the past as its remembrance gives you pleasure,” Lizzie advises.

Not everyone finds this as easy as Lizzie Bennet, who is helped by a naturally buoyant personality and lively sense of humour – indeed, of the ridiculous. Anne Elliot focuses on her friends. By refusing to be victims (as we would say today) Austen heroines keep the door open for better days and contribute to the general level of happiness. A good laugh can do wonders for depressed spirits.

Kozlowski quotes Virginia Woolf on Austen’s novels: “What is this note which never merges in the rest, which sounds distinctly and penetratingly all through? … It is the sound of laughter.” Laughter, like so many of Austen’s “habits of life” has since been “proven to lower blood pressure and even stress, even smiling is powerful.”

Living in tight-knit communities as Austen’s characters do has also in recent times been shown to promote longer, healthier lives. One should not be much alone. Friends provide a constancy of affection and understanding. Yet times of quiet and meditation are also essential – something that Fanny Price of Mansfield Park cannot get a minute of in her family home in Portsmouth.

Above all, it is love that makes Austen’s world go around. It seems almost superfluous to say so given the centrality of the romantic plot, but love in her stories is as much about the sisters and friends, parents and aunts who are always “there for you,” as we say. It is also about kindness to those less fortunate – as Mr Knightly reminds Emma after her epic fail on that score at the Box Hill picnic – and lavishing affection on the babies and youngsters of the clan.

As Kozlowski notes, this was vital to Jane Austen, who never married, but who has spread her love and happiness through two centuries, and who signed one of her last letters:

Everything of Love and Kindness,
proper and improper, must now suffice,
Yours very affectionately, J. Austen