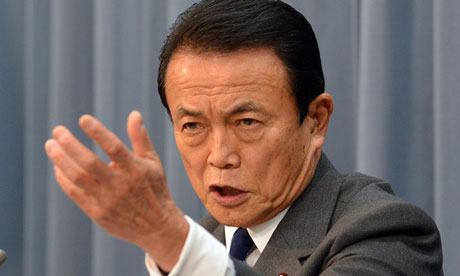 Among the hustle and bustle of the start to the year (it’s been a brilliant summer here and we’re enjoying little Thomas being a very cute little four month old) I forgot to blog about this little gem of a quotation:

“Heaven forbid if you are forced to live on when you want to die. I would wake up feeling increasingly bad knowing that [treatment] was all being paid for by the government,” he said during a meeting of the national council on social security reforms. “The problem won’t be solved unless you let them hurry up and die.”

What a great quotation! The “problem” of having to pay for old people won’t be “solved” unless you “let them [old people]” “Hurry up and die”. The person might have well have said that they had come up with a “final solution” to his country’s elderly “problem”.  So who was this person? Some crackpot greenie who worries more about a certain species of snail becoming endangered than he does about human beings? Some disgruntled blogger who was sick of getting stuck behind elderly at the supermarket checkout line? Well, no, it was actually the new finance minister of Japan, Taro Aso.

As the Guardian newspaper reports, these comments “are likely to cause offence”, which seems a little bit of an understatement, because almost are quarter of the population are over 60 years of age and this is forecast to rise to 40% of the population over the next 50 years. This is the part of the population that is taking up valuable resources and is taking too long to shuffle off this mortal coil according to Taro Aso. Now Aso is nothing if not consistent, he knows that it costs “several tens of millions of yen” a month to treat a single patient in the final stages of life, and so has written a note in advance instructing his family to deny him life-prolonging medical treatment (he is currently 72 years old). Aso also described elderly patients who are no longer able to feed themselves as “tube people”.  Charming.

Now, Aso has sought to “clarify” his comments (I love that word – “clarify” – it infers that the hearers, and not the speaker, are the ones at fault for misinterpreting what was said):

“He acknowledged his language had been ‘inappropriate’ in a public forum and insisted he was talking only about his personal preference.

‘I said what I personally believe, not what the end-of-life medical care system should be,’ he told reporters. ‘It is important that you be able spend the final days of your life peacefully.’”

That is, you should not be pressured into thinking that you are burden on the state and that you should “hurry up and die”. Whereever did you get that idea from? Thankfully Japan does not have national laws allowing euthanasia, but this sort of statement from a senior government minister should give the Japanese people food for thought before they even think about enacting any “death with dignity” laws. There are a lot of elderly in Japan. They cost a lot to care for in their last years. Do you really think that euthanasia laws could be implemented without any undue pressure being brought to bear on vulnerable elderly? After all, they are only “tube people”…