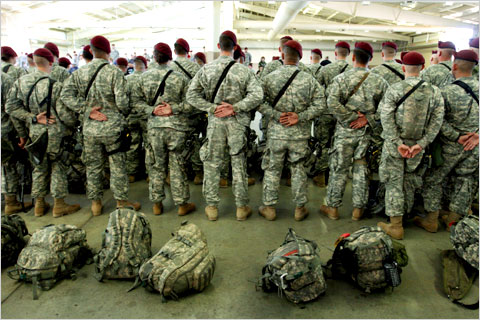 Thanks to recent
statements by US Secretary of Defense Robert Gates and the Chairman of the
Joint Chiefs, Mike Mullen, we must acclimate ourselves to what now seems the
inevitable rescission of the “don’t ask, don’t tell” policy toward homosexuals
in the US military. This policy itself was a compromise reached under President
Bill Clinton, who had wished to eliminate any obstacles to homosexuals in the
armed services at the beginning of his presidency. At that time, a decades-old
rule stated that homosexuality was “incompatible with military service.” The
“don’t ask, don’t tell” deal prohibited asking a person if he is a homosexual,
but allowed for the removal of openly declared homosexuals.

In the intervening
years, the willingness to consider the moral argument against homosexual acts
has eroded further. Toward the latter part of the Bush administration, the
then-Chairman of the Joint Chiefs, Marine General
Peter Pace, still had the nerve to say, “I believe homosexual acts between
two individuals are immoral and that we should not condone immoral acts. I do
not believe the United States is well served by a policy that says it is okay
to be immoral in any way.” He received zero support for his forthrightness.

Now, after President
Barack Obama hosted a homosexual celebration in the White House on the 40th
anniversary of the Stonewall Inn riots, Admiral Mullen has appeared before
Congress in favor of removing the “don’t ask, don’t tell” policy.

The excuses to
abrogate this policy are almost amusing in their claims that the rule is
unconstitutional and in the way in which opposition to the rule is steeped in
moral unction. Democratic Congressman Patrick Murphy, an Iraq war veteran, gets
the prize for constitutional exegesis: “I was disheartened that the
Constitution that I took an oath to support and defend was really being abused
by that policy.” In my years of studying the American founding, I do not recall
a right to sodomy or any implication that it was an obligation to fight for
another person’s right to engage in this obscene act. In fact, until fairly
recently, most states had laws against sodomy as a form of moral corruption.

The moral unction
award goes to Admiral Mullen, who apparently has not the slightest idea as to
why such laws once existed or why his immediate predecessor General Pace would
have said what he did. Mullen deserves the award for telling Congress that
“allowing homosexuals to serve openly would be the right thing to do,” and that
“I cannot escape being troubled by the fact that we have in place a policy
which forces young men and women to lie about who they are in order to defend
their fellow citizens.” Now let’s see: if you are not asked, and do not tell,
how are you forced to lie?

Regardless, the
sentiment expressed by Admiral Mullen is in sync with the homosexual
martyrology that developed with the spread of AIDS. They are not only dying for
a cause, but are willing to lie for one as well. This is all the more noble
because it is in defense of the realm.

It might be wise
to pause for a moment and think about what others may be forced to do should the policy of “don’t ask, don’t tell” be
abandoned. I may be able to bring a certain perspective to the issue since I
have both served in the military and worked extensively in the world of the
arts, which homosexual culture often dominates.

I keenly recall my
induction at Army basic training. It was conducted at a former WW II POW camp
for Germans. At Indian Town Gap Military Reservation, we first had our heads
shaved and then were told to strip naked as we, for several hours, went from station
to station being prodded and poked to ascertain our fitness for the coming
physical ardors. In the barracks, there were no stalls between the toilets or
showers, in case any of us thought there might be some small refuge of privacy
left. This was deliberately done to break us down, so we could then be reshaped
into fighting men.

Now imagine
inserting into this scenario some naked females. What would happen? All hell
would break loose. And whose fault would it be? It would be completely unfair
to both the men and the women to inject sexual tension into an already highly
demanding, emotionally charged situation. Those who contrived such a state of
affairs would be largely responsible for the consequences.

Since homosexuals
define themselves as being sexually attracted to other men, why would anyone
imagine that it is any less combustible to place openly-declared, practicing
homosexuals in the same setting? It is curious that the military is the only
form of association in which it is suggested that people would have to disrobe
in front of others who find them sexually attractive, but with whom they do not
desire any sexual intimacy. Is there a work place in which women are required
to do this in front of men, or men in front of women? For obvious reasons,
there is not. Why, then, make the US military such a place? The answer is,
under the faux guise of civil rights, to enforce the rationalization for homosexual
misbehavior on the country as a whole. What better way to achieve this than
institutionalizing this rationalization in the armed forces?

The question may
be asked: “If homosexuals are currently serving in the military under the
‘don’t ask, don’t tell’ policy, why hasn’t the mayhem described above already
happened?” The answer is precisely because the current policy requires
homosexuals to be covert in their behavior and not to display their
predilections openly. Overturning this policy would mean “coming out of the
closet” inside the military with the consequences described. Adding to the
tensions would be the fact that any heterosexual service member who objected or
acted in a way that could be interpreted as “homophobic” would be the one
brought up on charges or dismissed. They would be forced not to object to homosexual behavior.

Unlike many who
advocate this change in policy, I have actually worked in an openly homosexual environment
and know its consequences. As a professional actor, I appeared in productions in
which the majority of the cast members were homosexual, as were the directors.
When the “gay” subculture takes over, those who do not participate in it are discriminated
against. I am not shocked by this. It is human nature to prefer one’s own. I left
after a season in one regional theater, being told by the public relations
director: “you’re a good actor; it’s too bad you’re not homosexual.” More
disturbing were the occasions on which I had to resort to or threaten physical
force to halt unwelcome advances. Does anyone seriously think that things like
this would not happen in an openly “gay” military?

The lesson from
this experience is that the endorsement of being openly homosexual in the military
will lead to the formation of an approved subculture within the armed forces
that will seek its own ends and the advancement of its own (based at least
partly on sexual favors) – to the detriment of those who are not part of it. (This
is why, in our saner moments, homosexuality has been considered to be “incompatible
with military service.”) Once again, this is not shocking. It has to be expected
as part of human behavior. What is shocking is that President Obama, Secretary
Gates, and Admiral Mullen are willing to let this happen to a military that is
already under maximum duress from two wars. It is precisely this point that led
General George Casey, chief of staff to the Army, to say that any such change
should be held off until the troops are back from Iraq – as if there would ever
be a good time to do this. In the fine tradition of General Pace, the current
Marine Corps Commandant, General James Conway, believes repeal would harm
military readiness.

But military
readiness is not the objective of those seeking to overturn the policy. Moral
vindication of homosexual behavior is the goal – no matter what the price. Congress,
of course, can still stop this from happening as it requires a change in
legislation – which has already been prepared by Congressman Murphy, who
purportedly has 187 votes lined up for it (only 31 shy of the 218 needed for
passage). At least people in the United States will have the opportunity to
register their views with their representatives on whether to hold the fort for
US service members, or to open the gates for using them as pawns in the homosexual
revolution.

Robert R. Reilly writes from Washington DC. He is a
contributing editor to Crisis magazine.

Robert R. Reilly is Director of the Westminster Institute. In his 25 years of government service, he has taught at National Defense University (2007), and served in the Oﬃce of The Secretary of Defense,... More by Robert R. Reilly