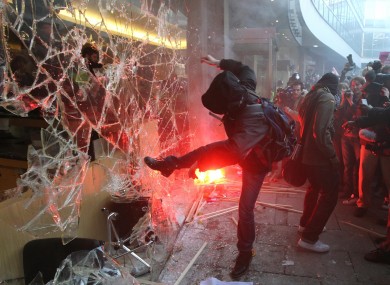 Last night, for the second time in a month, television news showed ugly scenes of rioting in one of the world’s major cities. Riled by government plans to triple university fees, 50,000 students and lecturers from around Britain converged on London to stage an angry but otherwise peaceful protest. But, as they marched past Parliament, someone over a loudhailer urged them to head to the “headquarters of the Tory Party” and, within moments, reports The Telegraph, the demonstration had “turned into a snarling violet attack”.

“By the time darkness fell, 10 people were in hospital, three floors of Millbank [the building in which the Conservative Party headquarters are located] had been wrecked, and dozens of demonstrators were occupying the roof… That nobody was killed was sheer luck; at the height of the riot a fire extinguisher was thrown at police officers from the roof of the building, missing them by no more than two feet.” Lumps of concrete followed.

While the president of the National Union of Students condemned the violence, many of those involved were unrepentant. A 22-year-old law student brandishing a cricket bat told a reporter: “If the government knows we’re willing to take this kind of action, they will take us more seriously.”

The scenes were reminiscent of rioting in French cities last month when high school kids and youths of various descriptions turned out with workers and university students in protests organised by their unions against their government’s move to up the national pension age from 60 to 62. Weeks of strike action escalated into outbreaks of violence as groups of youths blockaded entrances, smashed windows, hurled stones and torched the odd car.

Back in May, Greeks protesting against government moves to control national debt by cutting wages set fire to a bank, killing three people.

Debt-ridden Europe is tightening its belt, and it is understandable that austerity measures are upsetting to people who have only ever had to put their hand out to get a hand up from society. Growing up in a welfare state gives one what turns out to be a false sense of security and entitlement, but woe betide the politicians who try to change the social script.

No doubt the changes could be made in fairer, more humane ways. However, there is something quite sickening about the petulance and fury of well-off people faced with losing some of their privileges when you consider that, not only has most of humanity never had such comforts, but that right now millions of people in under-developed countries don’t even have a roof over their heads.

In Haiti, ten months after a devastating earthquake, more than one million people are living, homeless, among piles of rubble. Heartbreakingly, they are now being ravaged by cholera. By last month, $3.4 billion in aid money had been collected for the earthquake victims, but billions pledged for reconstruction has been slow to arrive from western nations and, given the country’s structural problems, many of the homeless have lost faith that they will benefit when it does come.

In Pakistan, the suffering following disastrous floods in July is similar but the number of people affected is much worse, and the aid response has been less generous. Official corruption once again makes everything more difficult. The New York Times reports that, as winter approaches, more than seven million people are homeless, malnutrition is rising and people sheltering in schools will be on the streets as the schools reopen.

“But pledges of aid amount to just 40 percent of the total required, according to the United Nations. The World Food Program may have to cut rations for many of the displaced unless the pace of donations picks up. The World Health Organization may have to pull back disease surveillance teams, crucial for detecting outbreaks of cholera and other deadly illnesses in camps.”

The litany of human misery goes on. Many of the 215,000 Filipinos affected by Typhoon Megi last month are living in temporary shelters. The eruption of Mt Merapi in Indonesia over the last two weeks has left 90,000 people homeless. Elsewhere, countless millions live in grinding poverty even without natural disasters to rob them of hope.

How, in the face of so much human need and suffering, can we spoilt children of the West complain about a little hardship — assuming that is what the current wave of changes will actually bring about? Shouldn’t we be ashamed of our tantrums and reckless disregard for the rights and dignity of others that increasingly accompanies them?

The cost of restoring property that was destroyed in London yesterday might have housed tens of thousands of homeless Pakistani people. Instead, it has been sacrificed on the altar of bully politics and mindless herd instinct. For shame!