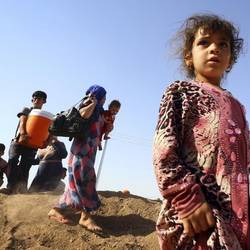 Stalwarts who have been working with embattled and endangered communities all along are pleading for relief. Whether they’re clergy, other religious, or faith-based organizations, they’re spent and crying out for help.

One anguished priest wrote to Pope Francis, out of desperation. He got a response.

Pope Francis has telephoned an Iraqi priest who is ministering in a refugee camp, according to a Vatican Radio report.

“The situation of your sheep is miserable,” Father Behnam Benoka, until recently a seminary vice-rector near Mosul, said in his letter. “They die and they are hungry. Your little ones are scared and cannot do it anymore. We, priests, religious, are few and fear not being able to meet the physical and mental needs of your and our children.”

“Your Holiness, I’m afraid of losing your children, especially infants who every day struggle and weaken more,” he continued. “I’m afraid that death will snatch some away. Send us your blessing so that we may have the strength to go on, and maybe we can still resist.”

In response to the letter, the Pope called Father Benoka and “reiterated his full support and closeness to the persecuted Christians, promising that he will continue to do his best to bring relief to their suffering,” Vatican Radio reported.

The refugees and those caught up in the violence while trying to deliver aid are at the point of helping each other survive.

Christians and other religious minorities who have fled areas in Iraq that have fallen under Islamic State control are now helping one another to survive as refugees, an aid worker said.

“They themselves have been displaced and they’re going around caring for those who are in need, who are in situations like they are,” Todd Daniels, International Christian Concern regional manager for the Middle East, told CNA Aug. 27.

Last week, Daniels was in Iraq, where it is estimated that more than 1 million people have fled from their homes amid the invasion of the radical Islamic State, also known as ISIS. The militant group has taken control of numerous cities and ordered Christians and other religious minorities to convert, pay a tax known as a jizya, or be killed.

The fleeing Iraqis – including Christians and other religious minorities – have sought refuge in other areas, such as the northern city of Erbil.

Daniels said that while the situation is desperate, there is much hope in the way religious communities and refugees are working to improve life there.

“Probably one of the most striking impressions was just the activeness of the local churches,” he said. “From morning to night they’re out there providing aid, providing relief and actually, a lot of the man power, for the groups we were working with by people who themselves have been displaced.”…

Some refugees hope that international security forces will help create a safe haven for Christians and other religious minorities, while others are just trying to grasp the reality that they will most likely never return to their homes.

“There’s really a feeling of not knowing what to do,” Daniels said.

Though I cover this ongoing crisis just about every day on radio and in writing, bringing in experts and giving out information, it can’t be repeated often enough. Because some people are just beginning to learn, others just beginning to pay attention, and some who realize the reality is dire, the relief organizations are on the ground and delivering aid, and the need for support is urgent and critical. But they don’t quite catch where they can contribute to that effort.

I was caught off guard by a frustrated listener who said, frankly, that tuning in briefly at different times as he could, he caught some of the conversations but not the ways to help, and wanted that information to be repeated often, so people tuning in and out as time allowed would hear something that gave them access to the relief organizations doing the hard, firsthand work of sustaining people fleeing for their lives.

For everyone’s sake, here are some of the best.

Catholic Near East Welfare Association is a papal agency delivering humanitarian aid and pastoral support in many locations globally, most acutely in the Middle East right now. They’re lean on staff and support costs, so most of the contributed funds go straight to the people actually in greatest need.

Catholic Relief Services is another long established aid organization on the ground where needs are the greatest across the globe, especially in the Iraq crisis.

Aid to the Church in Need is similar, also under the guidance of the pope and with the mission of aiding persecuted Christians and other suffering minorities.

The Knights of Columbus launched a major fund to help Christians threatened with extinction in Iraq.

“The unprovoked and systematic persecution and violent elimination of Middle East Christians, as well as other minority groups, especially in Iraq, has created an enormous humanitarian crisis,” said Supreme Knight Carl Anderson. “Pope Francis has asked the world for prayers and support for those affected by this terrible persecution, and we are asking our members, and all people of good will, to pray for those persecuted and support efforts to assist them by donating to this fund.”

Anderson added: “It has shocked the conscience of the world that people are systematically being purged from the region where their families have lived for millennia – simply for their faith. It is imperative that we stand in solidarity with them in defense of the freedom of conscience, and provide them with whatever relief we can.”

To that end, the US Bishops Conference has asked all parishes across the country to take up a special collection over the next two weekends to support immediate humanitarian and pastoral needs in the Middle East. Some began this past weekend. The USCCB site provides complete information on this initiative, including all the ways people can send aid and relief.

I was struck by a couple of different expert guests on radio last week saying the same thing, separately, on different days, about what was being lost in the elimination of Christians from the earliest birthplaces of Christianity. Besides the obvious.

They each said Catholics and other Christians have traditionally provided the hospitals, shelters, schools, homes, orphanages and distribution centers for basic needs in the areas they’re now being driven from, possibly at a point of no return. What will happen when they’re gone?

How many times have we heard: “Never again”?…

How often have we quoted: “The only thing necessary for the triumph of evil is for good men to do nothing”? And yet: Do we do nothing? What do we actually say in the face of evil?

We say those words over again, that quote from philosopher Edmund Burke, among other things that make us feel good to be aware and engaged, and feel like we’re alerting others to something grave that must be met with greater good and truth that can vanquish evil. But after saying those things, we too often go on to the next thing in our busy lives and tend to it.

This is a pivotal point in history.

“The spectacle of tragedy has always filled men, not with despair, but with a sense of hope and exaltation,” wrote Whittaker Chambers, whom National Review founder William F. Buckley Jr. described as “the most important American defector from Communism.” Chambers explained: “Crime, violence, infamy, are not tragedy. Tragedy occurs when a human soul awakes and seeks, in suffering and pain, to free itself from crime, violence, infamy, even at the cost of life. The struggle is the tragedy — not defeat or death.”

Is this a time of awakening?

At one point in his Witness, Chambers recounts how the daughter of a German Communist explained her father’s defection: He had been an unquestioning Communist, and then “one night — in Moscow — he heard screams. That’s all. Simply one night he heard screams.”

Do we hear the screams? Do we join with the persecuted in the prayers they have led us in? Will we join their witness to the truth about the dignity of every man and woman, of whatever faith or no faith? Will we never again be silent as evil is happening?

That is as unthinkable as the crimes against humanity that are happening daily.