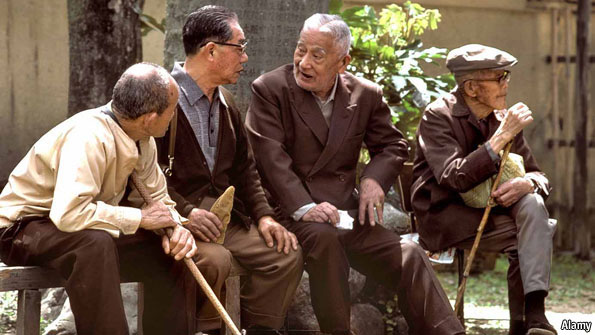 If the population structure of many western societies is changing then the existing economic and welfare supports in place may need to also change. As we get further into the twenty-first century and as many nation’s populations get more top heavy, can these nations still afford the same public health and pension schemes? After all, there will be a greater demand for these services and a smaller pool of taxpayers to pay for it.

In many respects, the world is looking at Japan for answers to cope with ageing populations as Japan is considered a forerunner in having to deal with such matters. As Nathan Lewis at Forbes notes:

The trouble is that the programs put in place to take care of the elderly in Japan was designed when the population was far younger than it is now.  They date from the 1950s and were “originally modelled on programs iniated in Prussia in the 1880s”. I have a sneaking feeling that public welfare programs developed in Bismarck’s era are not necessarily going to cope with the problems 135 years later. Especially when the cost of these programs is spiralling:

And if these costs continue to rise or are not contained then they will help to push Japan closer to bankruptcy:

“The Japanese government’s present overindebtedness is likely to be resolved by either default or, more likely, currency debasement. In that case, the existing public pension system, though it remains in form, would likely disappear in practice, as monthly payments become essentially worthless. This is what happened to pensioners when the Soviet system collapsed into hyperinflation in Russia in the 1990s, for example.

Alas, it seems like nobody today wants to think about these things. They would just like to continue the present, unsustainable status quo.”

So what are the options? The trouble is that it is an unpopular move for a government to try and reign in spending on pensions or healthcare. Particularly when the problems of not doing anything are unlikely to surface within the next parliamentary cycle. In New Zealand the governing National party (subject to an election this Saturday, see this blog next week for a post-election post) has set its face firmly against raising the age at which superannuation (pension) is paid from (65 years old). Our superannuation is not means tested either and it is pretty clear that the finance minister would like to tackle the problem but yet the Prime Minister is deadest against it – too many votes to be lost I suppose.

But Lewis argues in Forbes that drastic measures could be taken to tackle Japan’s problem. Cut everything:

“No public pensions, or any other program. In other words, the small-government, libertarian option. Obviously, this is also the cheapest option. Doing nothing costs nothing.

While we’re at it, we will also eliminate the public health system.

I’m not saying this is the best option. There’s a reason why public pension systems have developed over the past century. However, it is the way things were for most of human history, until only a few decades ago, and serves as a good departure point for thinking about these topics.”

If this were done, then Lewis argues that Japan could eliminate its payroll tax system which would help to maximise the productivity of the working-age population. Further, the elderly would be forced to live with their children, thus maintaining a “long-standing tradition in Japanese culture” and curbing the recent trend for independent elderly living.  Additionally, savings rates would probably increase as people realised that they needed to save for their retirement.  This would mean more domestic investment which would in turn drive “more and better-paying jobs”.  This would help workers ot pay for the elderly and may also help the elderly work longer too:

“Indeed, many elderly themselves could be hired for less-demanding jobs of one sort or another, with employers hungry for any employees they can get in the capital-rich/labor-scarce environment, just as was the case during Japan’s high-investment years of the 1960s. Savings rates in those decades were commonly over 20%; today, they are close to zero.”

As well as cutting the pension scheme, Lewis argues that the healthcare system could be radically changed towards “a better sort of public healthcare system” which concentrates on areas where it can generate maximum efficiency: physical trauma and infectious diseases. As Lewis notes:

“Those with beset by chronic lifestyle-related disorders, or the simple processes of aging, would get mostly advice.

The main focus of public health systems perhaps should be those under 65 – those with the most potential years remaining, most likely to have dependents, and who can contribute most to society.”

Now I’m not sure that many of us would agree with Lewis’ prescription for tackling the problem of an ageing population. The naked utilitarianism of the healthcare system for example grates and there seems to be no provision for those elderly with no family or corporation to look after them. Having said that, at least there is an attempt here to deal with the problem. And I think that Lewis is right in stating that the current social security systems in many countries will become increasingly, prohibitively, expensive. We need to start thinking about ways to lessen the impact of a greying society voluntarily and gradually before we are forced to take radical measures – perhaps along the lines that Lewis proposes. For, as Lewis states tritely, but still pertinently:

“When nobody tries to solve the problems of the day, they tend to not get solved.”