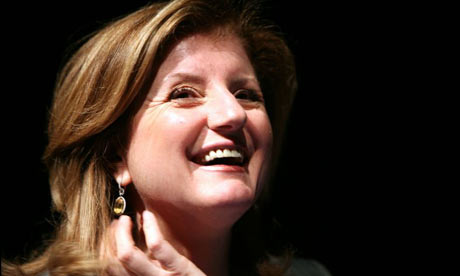 Seems like everything’s a big deal over at the Huffington Post. Which is, after all, what turned that enterprise into an unlikely online media monolith.

AOL even has $315 million to spend on this? Good for Huffington and all the Posters. Like Hilary Rosen, one of the bloggers defending the move against critics…media critics.

As a fairly regular blogger on HuffPost*, I can expertly say three things. I make no money from blogging, and I don’t resent it; I don’t intend to stop, and I don’t agree with critics who challenge the current model.

The fact is that for part-time opinion writers to be successful, we need platforms. We want our voices to be in the conversation of the day, and we need sites with a LOT of traffic to be effective in doing that.

In the current tech and information explosion, even the small lone ranger with a computer, smartphone or camera can start or join a worldwide conversation, as YouTube and Twitter prove just about every day.

It’s also interesting that the conversation in which HuffPo is so animatedly engaged is taking place mostly within the arena of liberal media and politics. And yet, some elite liberal media aren’t liking this arrangement, and not giving it long to last in its new iteration.

Arianna Huffington has laughed them off before, and she’s doing it again now. Though she had a tougher time convincing CNN’s Piers Morgan.

Said Morgan: “I’ve got one word for you: MySpace…when a big beast in the media jungle comes and swallows up this free, independent, blog-based, site…I mean it didn’t work for them, did it?  It kind of loses its sexy cool cache.”…

Arianna stepped in and explained that this was “not just buying the company” and that they have no intention of going the Murdoch route and charging for content (which, a cynic would note is easier to do when you don’t pay your writers).

Huffington told Morgan to save that video and check it again next year, with her trademark grinning audacity.

Who knows? This woman has been many things to many people. Which made her the pre-eminent networker.

Her merger with AOL, she has promised, will not temper the HuffPo’s line. ”Far from changing our editorial approach,” she wrote in an editorial yesterday, ”our culture, or our mission, this moment will be, for HuffPost, like stepping off a fast-moving train and on to a supersonic jet. We’re still travelling toward the same destination, with the same people at the wheel, and with the same goals, but we’re now going to get there much, much faster.”

Quite what this destination might be, she does not specify. But for Arianna Huffington, just getting there quickly has always been the point.