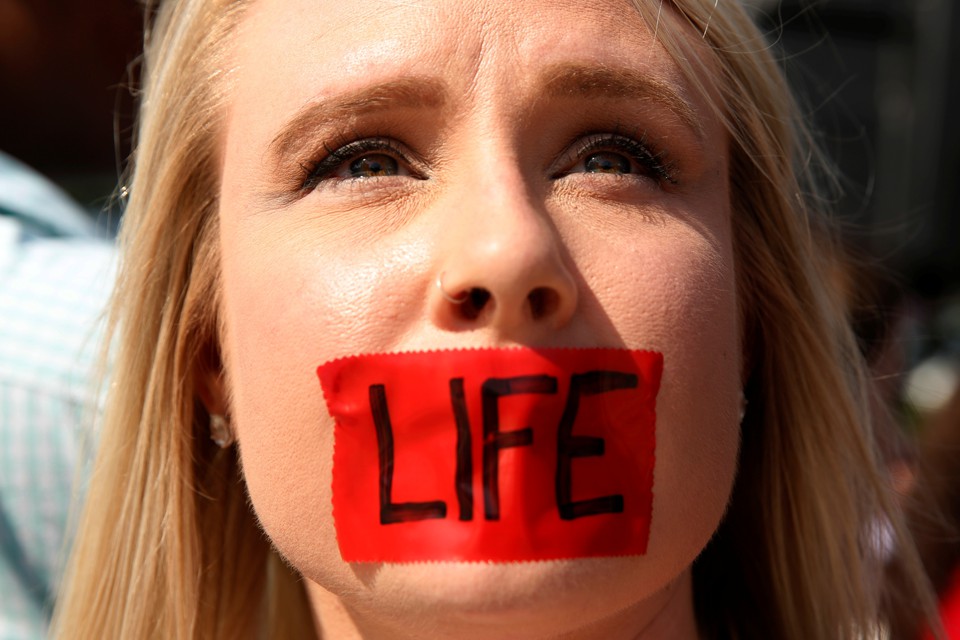 Kevin Lamarque / Reuters via The Atlantic

“Women” is a big word, so you would expect an event billed as a “women’s march” to be a very broad church. But the “Women’s March on Washington” scheduled for Saturday, the day after Donald Trump’s inauguration as president, has become rather sectarian, with the unintended consequence that pro-life women are getting some air time for a change.

First there were fights over race issues. Then someone tweeted shock and horror that a pro-life group had signed up, despite the event’s pro-choice plank, so the organisers said that was a mistake and un-partnered the New Wave Feminists. They wanted a lot of women out on the street, but not waving “anti-choice” placards.

However, they might just have to put up with it as young and feisty activists lay claim to both feminist and pro-life labels, and especially, at present, if they are anti-Trump.

The progressive press seems to realise this. It was The Atlantic staff writer Emma Green who first highlighted the intentions of pro-lifers to join the march in an article on Monday, while the New York Times and CNN featured pro-life views on the march in the following days.

Since Planned Parenthood, Naral Pro-Choice America and other abortion rights groups were sponsoring the demonstration, Green was naturally curious about how groups like New Wave Feminists would fit in. She asked, “Is there room in the [women’s] movement for people who morally object to abortion?”

Her article is an open-minded and balanced report on what various pro-life groups and individuals, as well as one of the organisers of the march had to say. The latter talked about “intersectionality” being the future of feminism, and the outlook for these strange bedfellows seemed fair — until influential feminist blogger Jessica Valenti tweeted that she was “Horrified” at the thought. And, perhaps, until Planned Parenthood threatened to pull funding?

On Monday afternoon Green’s article was updated with the news that the march organisers had removed the New Wave Feminists from their website and list of partners, stating that the Women’s March platform had been pro-choice “from day one” and apologising “for this error.”

At that point the New York Times — which had previously reported the friction over the race issue among some supporting the march, decided to run an article on the pro-life angle.

A week earlier it had called for readers planning to attend the march to get in touch. Among those who did was Maria Lyon, a young, married law student, who is a member of Women Speak For Themselves. Lyon is a self-styled feminist who voted neither for Trump nor Hillary Clinton; she is supportive of some of the platform but not attending the march because she opposes abortion. Her photo and comments frame the Times story, which perhaps shows the influence of the progressive institution’s post-election resolve to pay more attention to other voices.

In the article, these include the president of Students For Life of America, Kristan Hawkins, and Charmaine Yoest, a senior fellow at the conservative organisation American Values.

The pro-life voices are countered by pro-choice comments, references to Trump’s promise to appoint Supreme Court judges who would overturn Roe v. Wade, and to Pew polls that show 70 percent opposition to such a development (though not the almost 50-50 split over the morality of abortion). The Times piece does, however, quote an expert who acknowledges that Roe v. Wade “drove a wedge” into the women’s movement, and it describes Planned Parenthood as the reproductive rights “behemoth” – an epithet with ambiguous connotations that suggest a bit of critical distance.

Meanwhile CNN published an excellent opinion piece by Erika Bachiochi (“The views expressed in this commentary are solely hers”), a fellow of the Ethics and Public Policy Centre and a former pro-choice activist who is now a pro-life feminist. She begins by stating, “I did not vote for Donald Trump,” and goes on to argue that an authentic women’s movement must be “unabashedly pro-life” (“unabashedly anti-abortion” says CNN’s story highlights).

Her telling points about the negative effects of the sexual revolution – ultimately underwritten by abortion – may be lost in the immediate fracas over who deserves a place in a “women’s march”. But leading media are more aware than ever that abortion is not just a political (Republican v. Democrat) issue; it is one that crosses generational and political boundaries.

“Women” do not demand abortion rights. “Some women” do. Bob Bland told Emma Green that “Intersectional feminism is the future of feminism and of this movement. We must not just talk about feminism as one issue, like access to reproductive care.” And: “That’s what’s really powerful about this [march]: It’s centering voices that have previously been either marginalised or silenced,”

Hear, hear. Too bad the other organisers couldn’t agree.