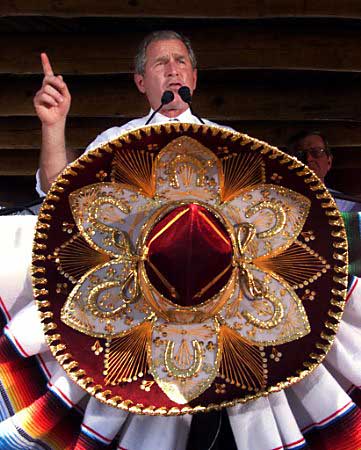 What changes will the election of a new president bring to America’s attitudes towards its southern neighbours? Most people on the other side of the Rio Grande think that there will be none. The Bush Administration, they think, is so absorbed in the Middle East that it has forgotten about them. It was always a second, or third, or even fourth-order priority. This was a big mistake, but whether Hillary Clinton, Barack Obama or John McCain is sitting in the Oval Office, he or she is destined to repeat it.

“It will be impossible to erase the last eight years and start again,” says Michael Shifter, an expert in Latin-American policy at Inter-American Dialogue, a Washington thinktank. There have been huge costs to US credibility and it will take some time to repair the damage. I hope the next administration also understands that the world has changed in the past several years, and the US cannot expect Latin American countries, or other nations, to accommodate to its national interests”.

Most Latin Americans believe that the gringos are, by and large, ignorant of world affairs. This perception has cost the US dearly in its credibility and leadership in Central and South America.

In many ways, American indifference is surprising. The Hispanic minority has been growing steadily in the US – something which politicians are well aware of. Of about 37 million immigrants, 15 million are Latin American. However, events south of the border seldom have seldom featured in the various candidates’ proposals, discussions and debates.

This was always a tendency in US foreign policy, but it intensified after 9/11. Shortly before the terrorist attacks, President Bush told his Mexican counterpart, Vincente Fox, that Mexico was an important ally and that he would not neglect it. But then everything changed. Washington’s focus became the Axis of Evil, especially the Middle East. Latin American affairs were shelved. At the same time, security and border control became an obsession.

Hence the Bush Administration lost its opportunity to build bridges with Latin America. This lack of engagement helps to explain why left-wing governments have been elected or re-elected in Venezuela, Ecuador, Bolivia, Brazil, Chile and Argentina. There were few trips to the region and few initiatives, apart from aid to Colombia to fight drug trafficking. The last eight years have marked a succession of lost opportunities to support Latin America institutionally and economically.

The Bush Administration believed that maintaining good business relationship was basically enough; “trade, not aid” was the theme of foreign relations. But is this enough? Andrés Oppenheimer, an Argentine political analyst who writes for the Miami Herald, believes that it isn’t. He points to the success of structural funds in the European Union in reducing economic differences amongst EU members and argues that the US should work harder and more creatively to reduce poverty in the region. In the long run this would do more to make friends in the region and more to secure the borders than miles of fences through the desert.

The Republicans have normally been more sympathetic to Latin American than the Democrats, who have opposed NAFTA. But now there are no substantial differences amongst the candidates.

Hillary Clinton appears to recognise that the credibility of the United States is at risk and wants to reform US immigration policy. She also claims that she would like to reduce Latin American inequality. But her star is fading.

Barack Obama owes his lead in the race for the Democratic nomination partly to the Latino vote. Like much of his policy, his views on Latin America are encouraging but vague. He will not support dictators like Venezuela’s Hugo Chavez and he will back moves for a more independent judiciary and against corruption. However, Argentine analyst Rosendo Fraga, says that Obama is shrewd enough to realise that while America has been busy elsewhere, China has increased its influence in the region. He appears to acknowledge that the notion of Latin America as a junior partner is old-fashioned.

But on the whole, the pundits think that the Democrats simply don’t have a Latin American strategy. Mexican analyst Valdés Ugalde says that “There have been nods towards the Latin-Americans, but neither Clinton nor Obama can afford the luxury of trying to be the party preferred by the Latinos; it is not yet clear what kind of proposals they have, beyond vague election promises… And they cannot oppose the security policy they have inherited from Bush which has put immigration policy on a back burner.”

McCain’s positive attitude towards immigration is encouraging for Latin American observers. He wants an amnesty for many of the 12 million illegal immigrants in the US (60 percent of them are Mexican) and an easier road to citizenship for undocumented workers. At the same time, he wants stricter border controls, for he is just as obsessed with security as Bush. But few believe that McCain will stay his course on immigration issues if he gets to the White House. “He already has very advanced plans. But, as President he might not be able to resist pressure from the conservatives and anti-immigrant groups”, says José Luis Valdés Ugalde, of the Center for North American Research at Mexico’s Universidad Nacional Autónoma.

McCain is also strongly influenced by Cuban exiles. He is close to Florida Senator Mel Martinez and Representatives Lincoln Díaz-Balart, Mario Díaz-Balart and Ileana Ros-Lehtinen. Cuba is always on the table.

So who is the best candidate for Latin America? According to Michael Shifter, “if one goes issue by issue — from trade to subsidies in the US for agricultural products to immigration — McCain might fit most closely with the positions for most Latin-American governments. But at the same time either Clinton or Obama is more likely to pursue a more multilateral approach in its relations generally, including Latin America, and both will move to withdraw the US from Iraq, which would be welcome in Latin America and might help restore some trust in the US”.

But the main issue which vexes Latin American minds is immigration. Everyone wants Washington to stop the anti-immigration feeling which has spread throughout the US. Unless the new president treats Latin Americans as respected neighbours, and not just as an unruly mob of swarthy drug dealers and illegal trash, he is unlikely to mend fences any time soon.

Pedro Dutour writes from the capital of Uruguay, Montevideo.

Pedro Dutour is a journalist in Uruguay, at the end of the world. He works at El Observador newspaper and Seisgrados, a magazine in Montevideo. He also contributes to Aceprensa,... More by Pedro Dutour