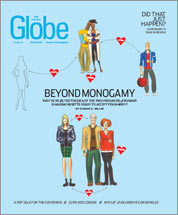 Africans have some excuse for polygamy — after all, it is traditional. But how do certain Bostonians justify what they are calling “polyamory” and what is just a polished-up version of free love?

The Boston Globe kicked off the New Year with a feature on a group of 500 or so people who identify themselves as polyamorous. Meaning? A spokesman says:

“There’s monogamy where two people are exclusive. There’s cheating in which people are lying about being exclusive. And poly is everything else.”

Or again, says the Globe:

Though common descriptors used for monogamy don’t easily apply to polyamory, there is a recognizable spectrum of how open these partnerships may be. On the closed end, you might have a couple in a primary relationship who will then have one or more secondary relationships that are structured to accommodate the primary one. There’s also polyfidelity, in which three or more people are exclusive with one another. On the open end, there might be chains of people where, for example, Sue is dating Bill and Bill is dating Karen and Karen is dating Jack, who is also dating Sue.

The Globe dignifies this particular form of self-seeking with some nice words:

“Polyamory has a decidedly feminist, free-spirited flavor, and these are real relationships with the full array of benefits and complexities — plus a few more — as the members of Poly Boston’s hypercommunicative, often erudite, and well-entwined community will explain”

Oh, and they have a work ethic — it is hard work maintaining two or more relationships, they say.

I would not have bothered reading the whole story about Jay and Mare and Allan and Michelle and all the others, including experts on the subject, except for a picture of a couple (married) with two children that was displayed at the beginning of the article. I wanted to know how the children fared.

But apart from a couple of references to poly people losing custody of their children — or the risk of losing them — it is not until the end of what is a very long article that we are told anything about how children might affect the lifestyle, and how it might affect them. Even then, it is precious little:

Then there are the kids, who in this case, according to Alan, understand as much about their parents’ lifestyle as they want to. The two boys have attended several Boston Pride Parades, and they know and interact with their parents’ partners as they would with any other close adult friends. But the Wexelblats have not yet explained the specifics of their lifestyle to their sons. “Kids deal well with things they think are normal,” says Alan. “To the degree that we can help them be comfortable with this, then they will treat it as normal. That’s the theory, anyway.”

An expert who has done a study says that “kids raised in poly families have access to many resources, such as help with homework, rides when needed, and the additional emotional support and attention that comes from having other, nonparental adults in their lives.” Big deal. But she also concedes that they “also sometimes feel extremely upset when their parents’ partners leave, if it means the end of the relationship between the kid and the ex-partner.”

No suggestion, though, that such emotional trauma would make the parents change a lifestyle that suits their own needs so well. A lifestyle choice that maybe can be traced back to what marriage scholars have identified as a change from child-centred marriage to the soul-mate model of marriage — or non-marriage — in which the emotional satisfaction of the couple remains the focus. With great risks for the wellbeing of children.