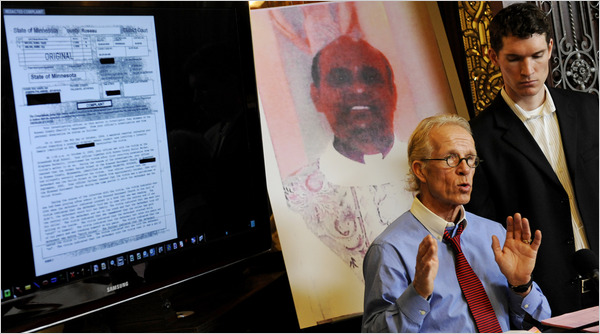 The latest
scandal to surface in the US does not concern an American, but a visiting priest from India. Rev. Joseph Palanivel Jeyapaul, from Tamil Nadu, was working
temporarily in the Diocese of Crookston, Minnesota, in 2004. He allegedly
sexually assaulted at least one girl but returned home to see his dying mother
(Um, that’s what he told the bishop) just before the accusations surfaced.
Minnesota authorities are now seeking to extradite him. According to the former
bishop, Victor H. Balke, he also misappropriated funds and possibly violated
the seal of confession.

The story appears on the front page of
today’s New York Times, along with a parcel of documents helpfully supplied by
Jeff Anderson, who heads up a firm of lawyers who are trying to sue the Holy See. As supplied, the documents suggest
that the Vatican did very little, although Bishop Balke was frantically trying
to have the errant priest brought to justice. “I cannot in good conscience
allow this matter to be passed over because the cleric has left my territory,” Bishop
Balke wrote. “In my mind that would be a shameful act of betrayal towards
the women and girls in India to whom Fr. Jeyapaul could at present pose a
serious risk.”

The narrative
constructed by the Times implies that the Catholic Church is still turning a
blind eye to serious allegations. Justice has still not been done, it suggests,
despite reforms initiated by Cardinal Ratzinger in 2001, and even though as
Pope he supposedly encouraging vigorous pursuit of abusive priests. The
Vatican’s legal representative in the US, Jeffrey Lena, released the following statement which puts a different light on the story:

The
decision regarding the canonical penalties imposed upon Father Jeyapaul was
made by the Bishop of Ootacamund… The Congregation for the Doctrine of the
Faith suggested in this matter that Father Jeyapaul agree to laicization,
demonstrating that the Congregation believed that the accusations were serious
enough to merit dismissal from the clerical state. However, as a matter of
longstanding canon law, such decisions are made by the local bishop… The Holy
See has cooperated with the requests of law enforcement authorities seeking the
extradition of Father Jeyapaul to the United States, and in fact provided his exact
location in India to assist such efforts.

The combination of a
shortage of local Catholic priests and the sex abuse scandal could prove
problematic for countries like the US which are increasingly relying upon
priests from other countries. According to statistics for 2009, of 21 allegations of abuse involving minors in 2009, 9 were made against foreign priests visiting in
the US. Two of these were Indian priests. In their cases, justice moved
swiftly. Civil authorities declined to prosecute either of them, but one was forbidden to perform priestly duties and the other was removed from
ministry. What happened with Father Jeyapaul may be a terrible exception. No
doubt the Mr Anderson will keep us informed.