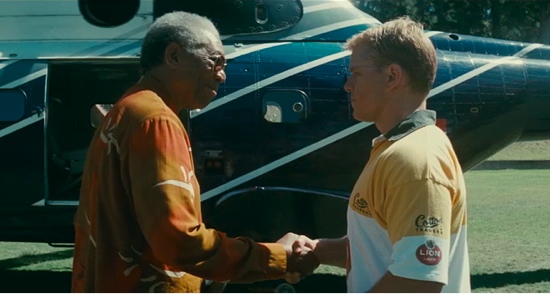 Morgan
Freeman is not God, but he played the role convincingly in Bruce
Almighty (2003). In Invictus, the new Clint Eastwood film,
he does not play God but rather Nelson Mandela, depicted in the film
as a contemporary Gandhi who combines sublime morality with political
savvy. is performance is so remarkable that one imagines Eastwood had
cast Mandela himself, and already the nominations for awards have
begun.

Based
on John Carlin’s book, Playing the Enemy: Nelson Mandela and the
Game that Made a Nation, the film tells a true story. In 1994,
just out of prison and now the new head of state, Mandela shocks his
own supporters and surprises his opponents by throwing his full
support behind the South African rugby team known as the Springboks.
Matt Damon plays Francois Pineaar, the captain of the team. To black
South Africans, the nearly all white team represents racism,
apartheid, and all that had oppressed them for centuries. They wanted
the team, a disgrace to the new nation, abolished. The whites
expected as much and looked to a gloomy future for themselves.

But
Mandela, who shares the views of his black countrymen, realizes that
the Springboks symbolize the white minority whose help he will need
to forge a nation. So he preaches forgiveness and moving ahead
towards a future of national unity. The Springboks and the World Cup
of rugby to be held that year in Johannesburg become the center and
test of his vision.

As
a corollary to this support for the Springboks, he further shocks his
“team” by insisting that a heightened need for his personal
security be met by recruiting from the Special Forces, the all white
police squad that specialized in intimidating and brutalizing the
black population. The Welsh actor Julian Lewis Jones, square jawed
and shaven head, convincingly plays the leader of this bunch, a group
of toughs anyone would wish to avoid. He reminds one of Dirty Harry
Callahan, just waiting for someone to step out of line so as to make
his day. Only Mandela’s charisma and leadership overcome the natural
antipathy the blacks feel about this policy of forgiveness.

Once
the film sets up the problem faced by Mandela, it shows the progress
of the Springboks, heretofore considered a mediocre team. At each of
their victories, we see the racial barriers falling. Prior to the
final match against the New Zealand “All Blacks,” Mandela
comes onto the field, dressed in Springbok green and gold.

As
the match progresses we witness a scene outside the stadium in which
a black newsboy, who earlier had shunned the Springboks, tries to get
near white policemen listening to the game on their car radio. At
first the whites turn him away, but as victory nears, in a series of
shots, the boy gets closer and closer till at the end, the police
embrace him and lift him joyously over their heads. Even the Special
Forces toughs break down and smile.

Once
Mandela embarks on this policy, he does everything personally to
inspire the team to victory. At one point he arranges for their trip
to the island prison where he spent 27 years, so they can see his
cell and appreciate what he suffered and what he overcame.

He
confides to Pineaar that William Ernest Henley’s 1875 poem,
“Invictus” (Unconquered) kept his hopes alive. He
handwrites a copy of the poem and gives it to Pineaar so that he too
will become inspired. In the film we hear but the last two lines, but
the entire poem is worth quoting. It provokes nostalgia for both
Victorian uplift and the lost art of meter and rhyme.

Out of the night that covers me,
Black
as the pit from pole to pole,
I thank whatever gods may be
For
my unconquerable soul.

In the fell clutch of circumstance
I
have not winced nor cried aloud.
Under the bludgeonings of
chance
My head is bloody, but unbowed.

Beyond this place of wrath and
tears
Looms but the Horror of the shade,
And yet the menace of
the years
Finds and shall find me unafraid.

It matters not how strait the gate,
How
charged with punishments the scroll,
I am the master of my fate:
I
am the captain of my soul.

Happily,
Eastwood and Anthony Peckham, the screenwriter, dropped Playing
the Enemy as a title and chose Invictus.

Once
the film sets up the situation and the problem, there is not much
drama. The only conflict occurs in the rugby matches, the final one
of which takes eighteen minutes of screen time. There’s no intrigue,
no twists of plot, no personal dilemmas that reflect or relate to the
national one, just an onward and upward movement. Matt Damon simply
jogs through his role, looking with blonde hair much like the young
Philip Seymour Hoffman in The Talented Mr Ripley (1999).

The
only villain in the film is the past, which is implied, not shown.
Nevertheless, the performance of Freeman, the great themes of
forgiveness and fraternity, and the spectacular cinematography, all
shot on location in South Africa, transform an uplifting true story
into an admirable film.

William Park is a veteran film
reviewer and the author of Hollywood: An Epic Production, a highly
praised verse history of American cinema. He lives in California.

none More by William Park