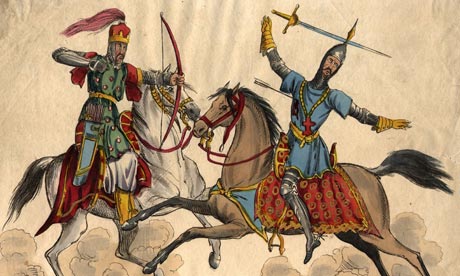 Did Obama do a moral equivalency of Christian Crusaders with Islamic terrorists today?

Well, yes. But he won’t call them “Islamic”, though that’s what they call themselves.

Expert analysts are talking daily now about the president’s refusal to address the threat we face globally. Time after time he’s had the opportunity, notably in the State of the Union address in January.

But in addressing the National Prayer Breakfast last week, Obama turned it into a chance to call religious extremism out. Of sorts.

In his comments at the National Prayer Breakfast on Thursday, President Obama condemned violence in the name of religion and pointed to religious groups other than the Islamic State that have perpetrated acts of terror in human history.

Note, other than the Islamic State, which has mutilated, crucified, beheaded, raped, enslaved, burned alive, beaten to death, tortured and terrorized countless populations of innocent women, children, men, elderly, anyone and everyone in their path.

Obama continued with this astonishing statement:

“Lest we get on our high horse and think this is unique to some other place,” the president said, “remember that during the Crusades and the Inquisition, people committed terrible deeds in the name of Christ. In our home country, slavery and Jim Crow all too often was justified in the name of Christ.”

Oh geesh. This is more than a ‘here we go again’ moment. This is critical mass. The president of the United States. Going there.

Against this backdrop of horror, our President feels the need to step back and take the long view. Instead of talking about Islam’s connection to the slavery of young girls right now, the President wants to lecture us on Christianity’s connection to slavery 150 years ago. Instead of condemning ISIS’ undeniable connection to Muhammad right now, he wants to re-focus our attention on the Crusaders and the Inquisition. Instead of condemning the Charlie Hebdo attackers Islamic extremism in a clear voice he wants to also condemn those who insult the faith of others (as if these two things were equally problematic).

This is not a much needed exercise in humility. This is a dodge, a cop out.

The ongoing threat to peace and human dignity from religion is not coming from Christianity, nor does it stem from Christian arrogance. The Christians being slaughtered in Nigeria, in Syria and Iraq, and in Egypt do not need a lecture on humility. The President ought to drop the moral equivalence and confront the threat we face in the here and now. And if he feels the need to lecture on religious humility, there is one religion that desperately needs to grasp the concept, right now in this century. In case it’s not already clear, that religion is not Christianity.

So in the name of Christianity, and for the purpose of clarifying the history of the Crusades now that we have this window opportunity, here are a couple of good articles by academics who know what they’re talking about.

Most people in the West do not believe that they have been prosecuting a continuous Crusade against Islam since the Middle Ages. But most do believe that the Crusades started the problems that plague and endanger us today. Westerners in general (and Catholics in particular) find the Crusades a deeply embarrassing episode in their history. As the Ridley Scott movie Kingdom of Heaven graphically proclaimed, the Crusades were unprovoked campaigns of intolerance preached by deranged churchmen and fought by religious zealots against a sophisticated and peaceful Muslim world. According to the Hollywood version, the blind violence of the Crusades gave birth to jihad, as the Muslims fought to defend themselves and their world. And for what? The city of Jerusalem, which was both “nothing and everything,” a place filled with religion that “drives men mad.”

On September 11, 2001, there were only a few professional historians of the Crusades in America. I was the one who was not retired. As a result, my phone began ringing and didn’t stop for years. In the hundreds of interviews I have given since that terrible day, the most common question has been, “How did the Crusades lead to the terrorist attacks against the West today?” I always answered: “They did not. The Crusades were a medieval phenomenon with no connection to modern Islamist terrorism.”

But you have to be open to learning the truth to accept that and stay with the article, short as it is. Madden knows this, too well.

It is generally thought that Christians attacked Muslims without provocation to seize their lands and forcibly convert them. The Crusaders were Europe’s lacklands and ne’er-do-wells, who marched against the infidels out of blind zealotry and a desire for booty and land. As such, the Crusades betrayed Christianity itself. They transformed “turn the other cheek” into “kill them all; God will know his own.”

Every word of this is wrong. Historians of the Crusades have long known that it is wrong, but they find it extraordinarily difficult to be heard across a chasm of entrenched preconceptions.

Which obviously includes the president.

Madden continued teaching, for those who were open to learning. Here’s a piece he wrote two years later.

Many historians had been trying for some time to set the record straight on the Crusades — misconceptions are all too common. These historians are not revisionists, but mainstream scholars offering the fruit of several decades of very careful, very serious scholarship. For them, current interest is a “teaching moment,” an opportunity to explain the Crusades while people are actually listening. It won’t last long, so here goes…

Misconceptions about the Crusades are all too common. The Crusades are generally portrayed as a series of holy wars against Islam led by power-mad popes and fought by religious fanatics. They are supposed to have been the epitome of self-righteousness and intolerance, a black stain on the history of the Catholic Church in particular and Western civilization in general. A breed of proto-imperialists, the Crusaders introduced Western aggression to the peaceful Middle East and then deformed the enlightened Muslim culture, leaving it in ruins. For variations on this theme, one need not look far. See, for example, Steven Runciman’s famous three-volume epic, History of the Crusades, or the BBC/A&E documentary, The Crusades, hosted by Terry Jones. Both are terrible history yet wonderfully entertaining.

So what is the truth about the Crusades? Scholars are still working some of that out. But much can already be said with certainty. For starters, the Crusades to the East were in every way defensive wars. They were a direct response to Muslim aggression — an attempt to turn back or defend against Muslim conquests of Christian lands.

Christians in the eleventh century were not paranoid fanatics. Muslims really were gunning for them. While Muslims can be peaceful, Islam was born in war and grew the same way. From the time of Mohammed, the means of Muslim expansion was always the sword. Muslim thought divides the world into two spheres, the Abode of Islam and the Abode of War. Christianity — and for that matter any other non-Muslim religion — has no abode.

It’s an extensive piece, well worth reading to learn the history of the Crusades. Take the time for it, too few people in media and politics will.

But they should get this from Madden’s conclusion:

From the safe distance of many centuries, it is easy enough to scowl in disgust at the Crusades. Religion, after all, is nothing to fight wars over. But we should be mindful that our medieval ancestors would have been equally disgusted by our infinitely more destructive wars fought in the name of political ideologies. And yet, both the medieval and the modern soldier fight ultimately for their own world and all that makes it up. Both are willing to suffer enormous sacrifice, provided that it is in the service of something they hold dear, something greater than themselves. Whether we admire the Crusaders or not, it is a fact that the world we know today would not exist without their efforts. The ancient faith of Christianity, with its respect for women and antipathy toward slavery, not only survived but flourished.