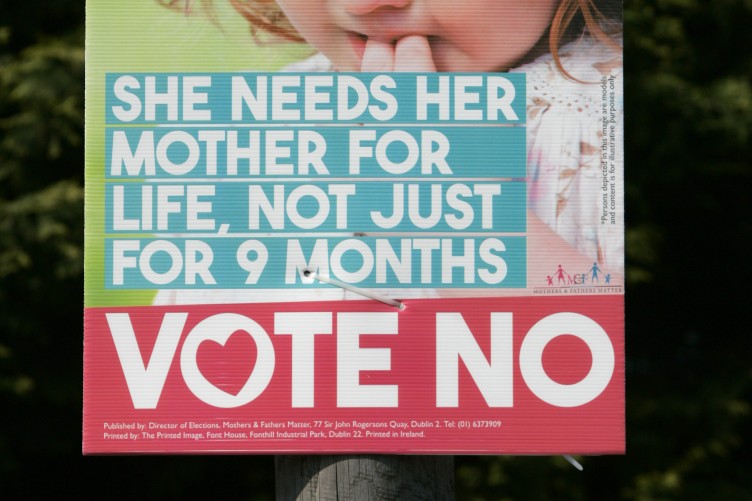 Ireland has written a social suicide note and we grieve for her. But we will not follow her.

More than half the Irish have voted for homosexual marriage, seduced by celebrities to violate something they once held sacred: the life between mother, father and child.

From today, the Irish Constitution assumes a mother does not matter to a baby, and a father is irrelevant to his son. That is madness.

Irish Prime Minister Enda Kenny said the vote was “Yes to love” — but there are children who will never know the love of their mother because of  Friday’s  constitutional amendment. He said it was “Yes to inclusion” — but it deliberately excludes children of same-sex couples from “the natural and fundamental group unit of society”, which is how the Universal Declaration of Human Rights describes the trinity of mother, father and child.

If removing spurious discrimination against gay adults means imposing genuine discrimination on children who are deliberately deprived of a mother or a father, what is the reason to celebrate?

Gay Irish celebrity blogger Paddy Manning  rejected claims  of discrimination against gay couples, saying, “Marriage is, at its heart, about children and providing those children with their biological parents. Recognising difference is not discrimination.”

Here in Australia, there is no unjust discrimination against same-sex couples in any way, be it taxation, superannuation, Medicare, next of kin status or any other matter, since Federal Parliament amended eighty-five laws in 2008. Same sex couples have full relationship equality and are free to live as they choose; they do not have the right to choose a motherless or fatherless existence for a little child.

Here in Australia, we will resist the dementia that is afflicting the decadent West. If we are the last country standing, we will still not abolish a child’s birthright to the love of her mum or her dad just to gratify the demands of homosexual adults.

Nor will we let our children be taught in school, by force of gay marriage law, that the sexual relationship of two men is no different, legally or morally, to a child’s mother and father in marriage.

For serious gay activists the greatest cultural gain of this referendum will be that all Irish children must now be instructed in the constitutional normality, indeed desirability, of homosexual behaviour, and conscientious objectors will be silenced by the big stick of anti-discrimination law.

We have observed many instances of homosexual enforcement in jurisdictions that have legalised gay marriage: parents in Massachusetts have been denied the right to withdraw their child from lessons by gay activists and church adoption agencies in England have had to close rather than adopt babies to homosexual households. A teacher in London was demoted for refusing to read a storybook to her class promoting same-sex marriage, and the former Archbishop of Glasgow, Mario Conti, was reported to police by a Greens Party MP for teaching Christian doctrine on marriage during a sermon.

This is the uncivil future under a gay marriage regime, and yet the good-natured Irish succumbed to the stupidity of nice. They were trying to be kind to the two percent of their neighbours who identify as same-sex attracted, without understanding that gay strategists have despised marriage for decades as a patriarchal repressive institution and only want it now because it brings with it the power to compel social attitudes.

In Australia we will not be that stupid. There are ways of being kind to our gay neighbours that do not involve violating the foundational relationship of human society: mother, father, child.

David van Gend is President of the Australian Marriage Forum