On May 22 Ireland will hold a referendum on same-sex marriage. Voters are being asked to add a definition of marriage to the country’s constitution, which would make it the only one in the world to expressly guarantee the right to same-sex marriage. The clause to be inserted is: “Marriage may be contracted in accordance with law by two persons without distinction as to their sex.”

The Taoiseach (prime minister), Enda Kenny, has given the Yes vote his strong backing. A leading Irish journalist, Bruce Arnold, has just published an open letter to him in which he asks Kenny to think again. 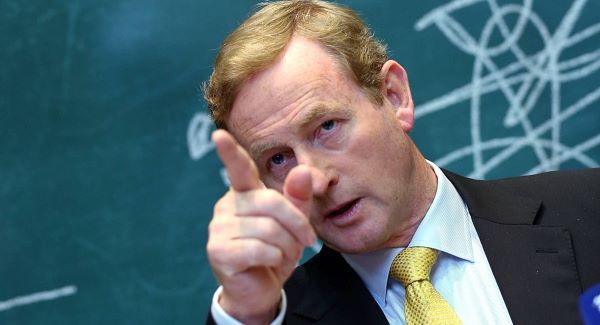 We have known each other for the whole of your political career, having first met after you succeeded your father in the by-election that resulted from his death. …

Perhaps the most important challenge you faced in your political career was the last general election. … I supported your candidature and your courage in putting a quality back into the search for power and a set of principles, not always effective, but good enough to support in the contest during that election…

I have to confess that much of this support and sympathy has been undermined by the inept and already damaging impact of your handling of the Marriage Referendum. If the referendum is carried, I see this as irreparably damaging to moral life in this country, to married life and the future of the family, and leading to the encroachment of wildly inappropriate approaches to the birth and development of children. It runs the risk of splitting the country irreparably.

I have shown recently how totally out of step with the rest of the world Ireland has become in pursuing an unwanted and unjustified constitutional amendment. It is being pushed through in a political atmosphere of almost total ignorance and hysteria. If the referendum is carried, Ireland will be the only jurisdiction in the world providing explicitly for same-sex marriage in its Constitution. It will become the flag bearer for same-sex marriage and gender ideology internationally.

This week, in a pithy and courageous call to the people, Brendan Howlin used a phrase about an aspect of the economy that resonated immediately with me. He called for “the full ventilation of the full truth”. In the marriage referendum the opposite has been the case. In your article in the Irish Independent on April 27th, for example, you repeat the blatant untruth that underlies your whole approach (“… importantly, marriage equality will not in any way affect the institution of marriage. It will only extend equal legal protections to all couples.”).

An approach of almost unprecedented ignorance is being purveyed and blindly supported. Talk of love and equality is no substitute for reasoned analysis of the consequences. Huge sums of money from outside the state have been employed, contrary to firm expenditure principles in most other political campaigns. Ministers are hailing the Yes Vote while at the same time refusing to say why and how it is appropriate. They are not answering any of the questions being put to them. Largely this is because they do not know the answers.

You are leading a campaign in a prejudicial and one-sided way that has all the faults of previous referendums, faults that led on several occasions to successful challenges by private citizens. The purpose of a referendum is to allow the Irish people to legislate directly on whether to amend their Constitution or not. Such acts of direct legislation should take place without voters feeling pressurised and intimidated by the Government of the day into voting in a particular way, with all members of that Government favouring a particular outcome, and certain organs of the State being allowed or even encouraged to act in a one-sided way also.

The Gardai [police] have been engaged, quite inappropriately, on the side of the Yes Vote. Their permitting of voter registration sites in universities, enrolling young people, to be used as posts to distribute Yes campaign materials and literature and to be decked with Yes campaign posters and murals, is a denial of their pledge to uphold the Constitution. Young and innocent people are being deliberately misled. The older generations are bewildered by the mood of near-hysteria that prevails in the country…

You have … chosen to deal with an issue that is exceptionally complex, both legally and morally, and which has implications for family law that are at the borders of medical technology and that stretch ethics to their very limits, and indeed beyond, in a trivial manner through a one-page referendum Bill, a single line in the Constitution and a threadbare draft Marriage Bill.

That is no way for a developed state to behave. It is also entirely contrary to the intent and spirit of the huge reform work undertaken by the Constitutional Review Group led by Ken Whitaker. I cannot understand why you have chosen to approach same-sex marriage in such a reckless and ill-thought out manner, a manner that would result in referendum after referendum to try to correct the results of a “yes” vote and which will make us the laughing stock internationally.

It has now also come to my attention that the Marriage Referendum, if carried, will serve to subvert directly the first of the Irish (Treaty of Lisbon) Protocols in relation to Article 41 (The Family) and Article 42 (Education). As Leader of the Opposition, you witnessed the defeat of the referendum on the Treaty of Lisbon in June, 2008 and it being subsequently carried in a second referendum in 2009, once certain protocols for Ireland were secured. These protocols became legally binding when, appended to the Croatian Accession Treaty, it became law on December 1, 2014.

It really is bewildering for me to see that once we adopt a protocol to protect the integrity of Article 41 and Article 42 of the our Constitution from being overridden by European law and the new wave of European genderless ideology, which utterly and falsely denies the differences between men and women, we then proceed within six months thereafter to try to change, radically and irreparably, our national understanding that marriage is based on gender difference. Thereafter, we will insist that the falsehood of genderless ideology be taught to our children in schools.

Young children and young adults will become increasingly confused, when as boys and girls, young men and young women, they are told that there is no difference between the male and the female. If this Referendum is carried our young people will be told in schools that marriage, which is based on the dignity of the difference between a man and a woman, has no regard to this difference. Can you not see how the false genderless ideology will underpin all of this in a way that leads to confusion? Great confusion will be done to our young people in realising their true identities and their God-given potential?

While certain countries in Europe are being seduced by a false gender ideology, which denies the differences between men and women, we have a clear defence against this falsehood with the first of the Irish (Treaty of Lisbon) Protocols. You worked hard for these protocols yet your Government are now trying to abolish their protection. More significantly, ministers are telling the Irish people nothing about this. Can you not see how wrong this is? Has no adviser explained that the first of the protocols, which were necessary to secure the carrying of the referendum on the Treaty of Lisbon in 2009, will be destroyed if this referendum is carried? …

In the light of all that has happened and of our long relationship, I would deeply appreciate answers from you to the following questions:

1. Did the Ministers for Justice and Equality or Foreign Affairs and Trade or the Attorney General inform the Government of the Irish (Treaty of Lisbon) Protocols when considering the Marriage Referendum Proposal? Was there any discussion about the first protocol (in so far as it protects Articles 41 and 42) being totally undermined by the Marriage Referendum proposal?

2. When Article 41.3.1 of the Constitution provides that the State pledges to protect the institution of Marriage upon which the Family is founded from attack, what does this really mean for a marriage of two men? Does it not mean that they will have a constitutional right to donor assisted human reproduction and surrogacy to “found” their family? Must not all legislative restrictions on these practices be subject to this new and radical constitutional right?

3. Did the Minister for Education and Skills inform the Government of the potential effect on the education system of placing same-sex marriage on the same level as heterosexual marriage for the future of primary and secondary education in our country in terms of what will be taught to children and young adults about gender, sexual orientation and sexual practices?

4. Has the Minister for Justice and Equality informed the Government of her view of the involvement of the Gardai on the “yes” side of the referendum campaign?

5. Have you not considered the inappropriate and unwarranted statements made by state employees on behalf of their organisations, pledging a support they should be unable to offer?

I do not doubt that you and the Government have done enormous damage to any fair, balanced and EQUAL handling of this Marriage Referendum. I think that you should put a stop immediately by qualifying your position and that of the Government and indicating that you at least are reconsidering your own vote on 22 May, and that you are doing this in light of the many unforeseen, unintended and unconsidered consequences of this referendum that have been brought to your attention.

Bruce Arnold is the former Chief Critic of the Irish Independent, writing about art, theatre, music and politics.

Bruce Arnold is a writer and journalist. He has published twenty-three books and is former Chief Critic of the Irish Independent, writing about art, theatre, music and politics. He was born in London,... More by Bruce Arnold