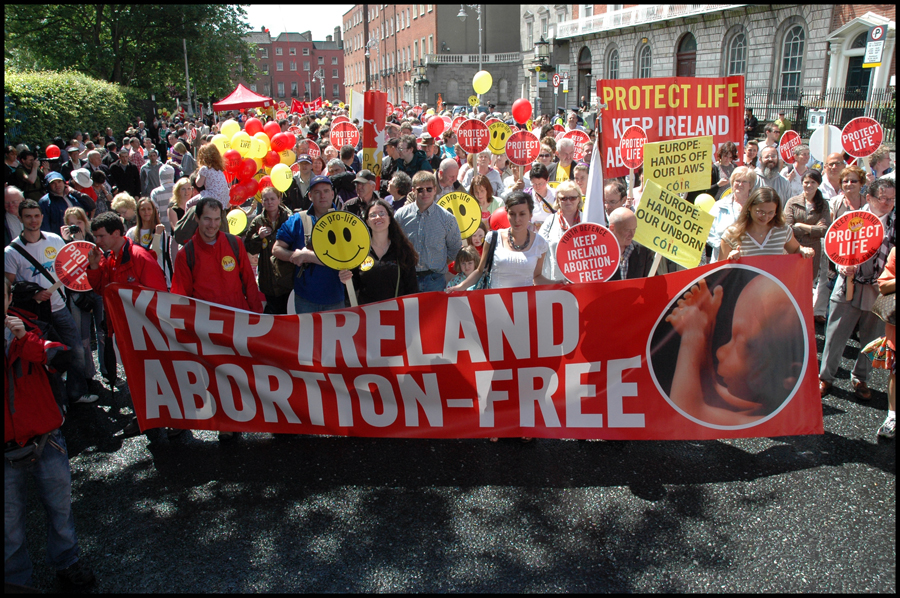 The issue of the right to life of the unborn child became centre-stage in Ireland again yesterday with a ruling from the European Court of Human Rights. The court ruled on a case brought before it alleging the denial of human rights to three women who were unable to have abortions in Ireland because of its constitutional ban on the procedure. The rulings immediately set off a fire-storm of differing interpretations on the ruling and whether or not it obliges the Irish State to abandon its prohibition on abortion. Clearly the Pro-life activists and those wishing to see abortion available in Ireland were lining up for another all-out battle on the issue.

The Strasbourg-based court, which is separate from the EU, adjudicates on human rights issues among all 47 member states of the Council of Europe.

The identities of the women involved are confidential. They have only been known to the public as A, B and C. Two are Irish and one is a Lithuanian who was living in Ireland. After they failed to get an abortion in Ireland they travelled to the Britain for the procedure. The pro abortion campaign then took up their case and processed it through the Irish courts – but to no avail. Their last port of call was the ECHR which has now given its judgement.

They include a woman who received chemotherapy for cancer; a woman who ran the risk of an ectopic pregnancy; and a woman whose children were placed in care as she was unable to cope. Although the court has only found in favour of the first woman, the headlines are proclaiming that the ruling has found that Ireland has failed to properly guarantee the constitutional right to abortion to which a woman is entitled when her life is at risk.

This distinction harks back to an Irish Supreme Court ruling in the 1990s when the Irish Constitution’s prohibition on abortion was overruled by that court in the case of a young girl who had been statutorily raped and became pregnant. This was know as the “X” case, since the girl could not be named. The court, on the basis of an opinion – which many found medically questionable – that the girl was in danger of committing suicide, declared that her right to life took precedence over the life of the unborn child. A miscarriage ended that tragic story but the Court’s ruling left Ireland’s legal position on abortion in very disputed territory. The campaign behind the case of these women was designed to bring all this to a head and open up the possibility for women to have abortions in Ireland.

In this case the Irish Government defended the status quo on Ireland’s abortion laws, maintaining that it was based on “profound moral values deeply embedded in Irish society”. Its legal team argued before the court that the ECHR had consistently recognised the traditions of different countries regarding the rights of unborn children and maintained that this case sought to undermine these principles and align Ireland with countries with more liberal abortion laws.

Nevertheless, on Thursday morning the court unanimously ruled that the rights of one of the three women were breached because she had no “effective or accessible procedure” to establish her right to a lawful abortion. The woman’s case was that she had a rare form of cancer and feared it would relapse when she became pregnant. She was unable to find a doctor willing to make a determination as to whether her life would be at risk if she continued to term.

The court concluded that neither the “medical consultation nor litigation options” relied on by the Government constituted an “effective or accessible procedure”. “Consequently, the court concluded that Ireland had breached this applicant’s right to respect for her private life given the failure to implement the existing constitutional right to a lawful abortion in Ireland.” The court ruled that there had been no violation of the rights of the two other women involved in the case – “A” and “B”.

The failure of the campaign to secure a ruling in its favour in all three cases gives some encouragement to the pro-life movement in Ireland – and indeed in Europe. It means that the Court, at its highest level, has not declared abortion as such to be a human right under the term of the European Convention on Human Rights.

The ECHR ruling has put the issue of back on the political agenda in Ireland and is likely to force all the political parties now heading into a General Election in Spring to adopt clear policies on the matter. They will not like this. Until now, with the exception of the left-wing Labour and green parties – the politicians have shied away from the issue knowing how complex it in fact is. It touches deep matters of conscience which they would rather not have to engage with.

Interestingly enough, this week the Fianna Fail Party, the main party in the present government has reached a historic low in opinion polls – because of its perceived mis-handling of the economy. As the most traditional party it would however, be seen as the natural pro-life party and might well see this issue as a life-line. Were it to take a very pro-life line on legislation – because whatever government comes in will now, it seems, have to frame legislation on this issue. The most recent opinion poll findings show that 70% of the public support constitutional protection for the unborn,13% oppose it and 16% don’t know or have no opinion.

The Irish Minister for Health, Mary Harney, seems to have accepted that the ECHR ruling will oblige the State to legislate to secure the human right which it maintains the Irish Constitution has denied to one of the women. Others dispute this obligation. Ms. Harney has said the Government would reflect on the ruling and take legal advice. She said the Government would have to come forward with proposals to reflect the ruling. Clearly kicking to touch she added, “However, this will take time as it is a highly sensitive and complex area.”

Professor William Binchy of Trinity College Dublin’s Law faculty said yesterday at the Irish Pro Life Campaign’s Press Conference, that the ruling “would require detailed analysis over coming days but some clear points emerge immediately. The most important is that the judgment does not require Ireland to introduce legislation authorising abortion. On the contrary, it fully respects the entitlement of the Irish people to determine legal policy on protecting the lives of unborn children.”

Professor Binchy, an internationally renowned lawyer and author, has always been highly critical of the judgement in the “X” case referred to above. “The evidence over the past 18 years contradicts the medical assumptions of the X case decision. It is crucial to note that the judges in the X case heard no medical evidence. In the years since the ruling, the evidence has steadily built up confirming the opposite of what the judges had assumed – women who have abortions are more likely to commit suicide than women who continue with their pregnancy.”

As he sees it the Irish people must now make a choice. He says that if they were to choose to endorse the Supreme Court decision in X, – which is what the pro-abortion campaign will look for from the politicians – “this would involve legalising abortion contrary to existing medical practice and the best evidence of medical research. If on the other hand, the Irish people choose to endorse the current medical practice, they will be ensuring the continuation of Ireland’s world renowned safety record for mothers and babies during pregnancy.

“Any revisiting of the X case decision would need to take on board the evidence from these new studies that abortion involves significant risks for some women. Based on the current state of medical evidence alone, it would be irresponsible simply to introduce legislation along the lines of the X ruling as it would put at risk the mother’s life as well as taking the baby’s.

“The suggestion that because of this country’s pro-life ethos pregnant women are denied necessary medical treatments is simply not true. In fact, Ireland is a world leader in safety for pregnant mothers. The latest UN report on the safety of mothers during pregnancy found, of all 172 countries for which estimates are given, Ireland leads the world when it comes to safety for pregnant women.

“By all means, let us debate the abortion issue openly, honestly and with all the facts in front of us. But equally, we cannot shy away from the implications of what legal abortion would involve and the brutal reality of abortion, legal up to birth, in countries like Britain.

“What’s at stake in this debate is the value of life, and the sad experience is that once laws permitting abortion are introduced, they diminish the society’s respect for the inherent value of every human life, born or unborn. What we need now is a calm, respectful national discussion, in which the latest medical and scientific evidence is fully considered leading to a solution at a Constitutional level, which will ensure the full protection of all human beings, mothers and unborn children, on the basis of respect for their equal dignity and worth.”

Michael Kirke is a freelance writer in Dublin.  He
blogs at Garvan Hill.