November 25th is the United Nations International Day for the Elimination of Violence Against Women. From then until December 10, International Human Rights Day, UN Women runs a 16-day campaign against gender-based violence, which this year focuses on raising money for that purpose.

Although women often perpetrate violence, especially in the domestic sphere, the culprits in this campaign are implicitly men. But which men? What makes it more likely that a man will inflict violence on a woman or child? This is a question that is seldom addressed in an objective, scientific way, as David Quinn of the Iona Institute notes in the following comment.

A conference was held in Dublin last week called Safe Ireland. The intention was to draw attention to, and find ways of reducing, violence against women and children. One issue it appears not to have gone near is whether there is a link to family structure. That was a big oversight.

Broadcaster Olivia O’Leary warned that “traditional family values hide a great deal of cruelty”. This is true if by “traditional family values” she means a tendency to regard the family as “sacrosanct” and pretend nothing bad can ever happen when a child is being raised by its married biological mother and father.  Apart from that it is not a very useful thing to say anymore as it seems to completely overlook the issue of whether or not  domestic abuse is more or less likely to occur within certain family structures.

This is a very delicate subject. No-one wants to appear ‘judgemental’, and therefore almost no-one goes near the topic. But this is the same attitude that caused the authorities in English towns like Rotherham and Rochdale to cover up sexual assault and rape of white girls, often underage, by mainly Pakistani men because of a fear of inciting racism. So perhaps politically correct sensitivities can “hide a great deal of cruelty” every bit as much as “traditional family values” can.

The fact is that there does appear to be a link between family structure and domestic violence. The table published with this article would seem to demonstrate as much. It is based on a 2011-2012 National Survey of Children’s Health, conducted by the U.S. National Center for Health Statistics, which surveyed no fewer 95,677 parents of children aged 17 and under. 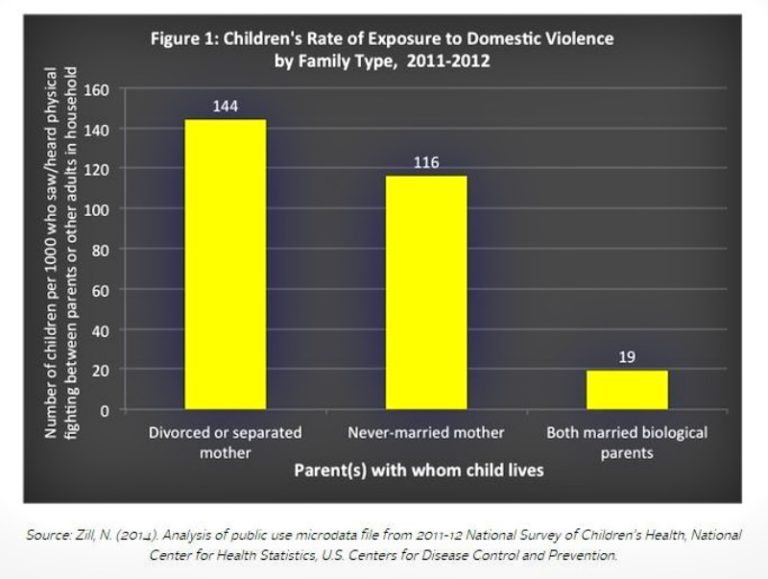 Those parents were asked whether their child had ever seen or heard “any parents, guardians, or any other adults in the home slap, hit, kick, punch, or beat each other up.”

As this article published by the Institute for Family Studies in the US points out, the findings were absolutely stark. Children living with a divorced or separated mother were seven times more likely to witness domestic violence than children living with their two married biological parents.

Researchers often attempt to explain away this kind of finding by reference to other factors like poverty, education or mental ill-health. But the above finding comes after controlling for other factors.

If the mother never married, as distinct from being separated or divorced, the child was still six times more likely to witness domestic violence compared with children living with their married, biological parents. It’s a minority of children to be sure – 116 per thousand – but that is still a lot of children.

In other words, if we are really concerned about domestic violence we have to look at the issue of family structure and not try to explain it all away out of a desire not to offend. That desire not to offend, while good in itself, must not prevent us looking at the facts and the fact seems to be that family structure matters. Will next year’s summit look at this squarely or continue to avoid it, or if not avoid it, seek to explain it away?

At a minimum, the summit ought to invite a speaker who can look at this issue fairly and objectively and lead a proper discussion about it. It needs to be brought out into the open and not hidden away in the same way that traditional Ireland used to hide away topics it found inconvenient.

* See here and here for the link between family structure and child abuse. The finding is worryingly similar.

David Quinn is Director of the Iona Institute in Ireland.