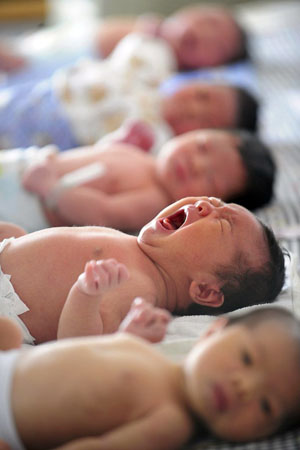 We have mentioned before rumblings about the
Chinese government’s one child policy emanating from Guangdong province.

The Economist has recently run a
feature article on this story which provides a few more details.
What is interesting about this story is that:


“Until recently most discussion in
China has been confined to academic demographers…This month the debate became
political. A provincial official went public with a request to let Guangdong — China’s
most populous province, with 104m people — loosen the rules. Speaking to
newspapers, Zhang Feng, director of Guangdong’s Population and Family Planning
Commission, said he had applied for “approval to be the leader in the country
in the relaxation of the family-planning policy”.”

It is not the call for the
relaxation of the rules itself, which as the Economist points out, is “in fact
rather modest” but the fact that it has come from a currently serving official
who has made his criticisms public.
After all, “requests to the central government are seldom aired in
public”.

Is this the start of a change of
heart by the governing body of China?  This
Economist editorial certainly hopes so.  The editorial begins by showing the terrible
human rights abuses that are involved in carrying out the one-child policy.  It cites Yuan Chaoren, a villager from Longhui county
in Hunan province, who described the behaviour of family-planning bureaucrats to Caixin magazine:


“Before 1997 they usually punished
us by tearing down our houses for breaching the one-child policy…After 2000
they began to confiscate our children.”

I agree that this is terrible, but
isn’t there a more fundamental human rights abuse here?  Isn’t it the case that no matter what the sanction
that is used by Chinese government officials, the one-child policy in itself is
unjust and contrary to fundamental human rights? Legislating how many children
people can have is a grave abuse right? Or is this instead a valid area of
concern that the Chinese government is perfectly entitled to legislate
about?

The Economist editorial also notes other:


“…horrific features of family life,
notably the practice of aborting female foetuses to ensure that the lone child
is a son.  The one-child policy is not
the sole cause, as India shows, but it has contributed to it.”

We have touched on this troubling
fact many times on this blog: here,
here,
here
and here.  However, I can never understand how this is
practice is “horrific” unless one thinks that abortion itself is “horrific”.  I do not know the Economist’s editorial
stance on abortion, but I would be very surprised if it endorsed a pro-life
position.  Can anyone help me here, why
is abortion wrong if you are aborting a female foetus, but ok if you are
aborting a disabled foetus? For a similar argument, raised in New Zealand recently because of concerns regarding a blood test
pregnancy packs, see here.

Aside from these moral issues, the
Economist editorial argues that the claim that the one child policy has been
responsible for averting 400 million births is “patent nonsense” because:


“Chinese fertility was falling for
decades before the one-child policy took effect in 1979. Fertility has gone
down almost as far and as fast without coercion in neighbouring countries,
including those with large Chinese populations. The spread of birth control and
a desire for smaller families tend to accompany economic growth and development
almost everywhere.”

However, the policy has certainly had
an effect – it has reduced fertility beyond what it would have reached
anyway.  This has led to a “demographic dividend”
as China has enjoyed such a low dependency ratio – the number of dependent
elderly or children to the number of economically active adults. However:


“…the dividend is near to being
cashed out. Between 2000 and 2010, the share of the population under 14—future
providers for their parents—slumped from 23% to 17%. China now has too few
young people, not too many. It has around eight people of working age for every
person over 65. By 2050 it will have only 2.2. Japan, the oldest country in the
world now, has 2.6. China is getting old before it has got rich.”

But enough of the consequences, we have
at the end of the editorial the hope for future change:


“Demography is like a supertanker;
it takes decades to turn around. It will pose some of China’s biggest problems.
The old leadership is wedded to the one-child policy, but the new leadership,
which is due to take over next year, can think afresh. It should end this
abomination as soon as it takes power.”

I certainly hope so too. For all of
the above reasons. But even if none of them existed, for the simple fact that
the state (in any country) should not dictate to people how many children they
should have.