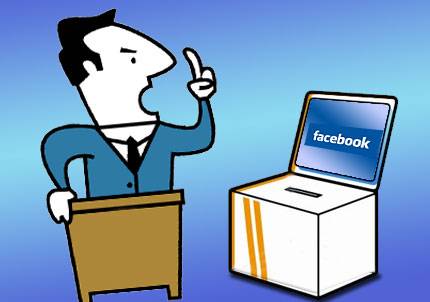 Recently, I reported on the question of whether the rise of Big Data would be the death of politics. Actually, it’s not so much that politics will die as that it might change.

The key issue for most of us is whether it will still be the politics of a free society.

Currently, some are pointing fingers at Facebook, claiming it is wrecking political news. Facebook is hardly innocent. I have noted earlier that it experimented on its users (Part I and Part II), without knowledge or consent.

That was bad principally because the results were treated as science.

Advertisers study our preferences all the time. But they don’t claim it is science, so it tends to be just data that companies make money on (or don’t), not treated socially or legislatively as some kind of Truth.

The current claim against Facebook, at Kernel, an online journalism mag, is that

Facebook loves it when its users engage with the site because engaged users spend more time on Facebook. Publishers love it because not only do they get a chance at crazy traffic, but it’s possible for them to see that a narrative is trending, create their own piece on the subject, and ride the trending topics wave into an ever-churning sea of clicks.

This scenario encourages the worst kind of journalism. If the window was nonexistent and seeing something on the trending topics sidebar meant it was already too late catch the wave, that would be one thing. It would be another if a trending topic boost lasted for a day or two, giving time for real reporting. But the current sweet spot encourages publications to look for what’s trending and pump out something on that subject as quickly as possible.

Not every story requires an exhaustive reporting process, but a lot of them do. Encouraging fast stories that barely give writers enough time to do even the most cursory research on topics that everyone else is already covering produces lots of quickly aggregated pieces that do little to advance anyone’s understanding of what’s going on, and can amplify any errors that existed in earlier publications’ coverage.

There is only one answer for this problem, the only answer there has ever been: Personal judgement.

I must go off to the polls on Monday to vote for local government officials. Two things to keep in mind: Most personal comfort issues are the responsibility of local, not national, government. If the snow isn’t ploughed or the water doesn’t run or the ambulance doesn’t arrive, it is the people far down the line who make or break such systems.

We should know who they are and care. (If you doubt this, read about the Walkerton water crisis.)

Second, governments are only as good as the people who elect them. That might sound like a truism, but it can be turned back on itself to good effect: We can’t elect a government to be better than we are.

The best reason for voting was explained to me by a personal care worker at an old folks’ home recently: If you don’t vote, you have no right to complain.