On May 2nd, I was sitting in my room, checking Facebook before going to bed when my cousin’s status caught my attention. It said simple “Ding dong, the Wicked Witch is dead.” What in the world was my 27-year-old cousin talking about? And why was he quoting The Wizard of Oz. A quick Twitter check and I realized Osama bin Laden had been killed. Almost instantly my Twitter and Facebook feed was blown up with sentences about the death of the greatest terrorist of our time.

It wasn’t long before there was a commotion outside my window. Police cars with flashing lights, taxis honking horns and then a mass of chanting bodies marching somewhere. I threw my window open, stuck my head out and tried to listen intently. The crowd’s cheers varied between the popular oldies song chorus “Na. na na na, hey, hey, hey goodbye.” and “U.S.A.” Instead of breaking up the crowd and sending them home, the police were clearing the path for them, shutting down traffic and letting the crowds march to the Boston Commons.

Who was marching? College students from all over the city. After all, we are the generation who grew up in this war. We are the ones that couldn’t even vote when our country declared war on terrorism and entered the fray. We have watched family members and friends enlist in the armed services, heading off to fight an enemy that had only a vaguely defined purpose but had one clear name: Osama bin Laden. 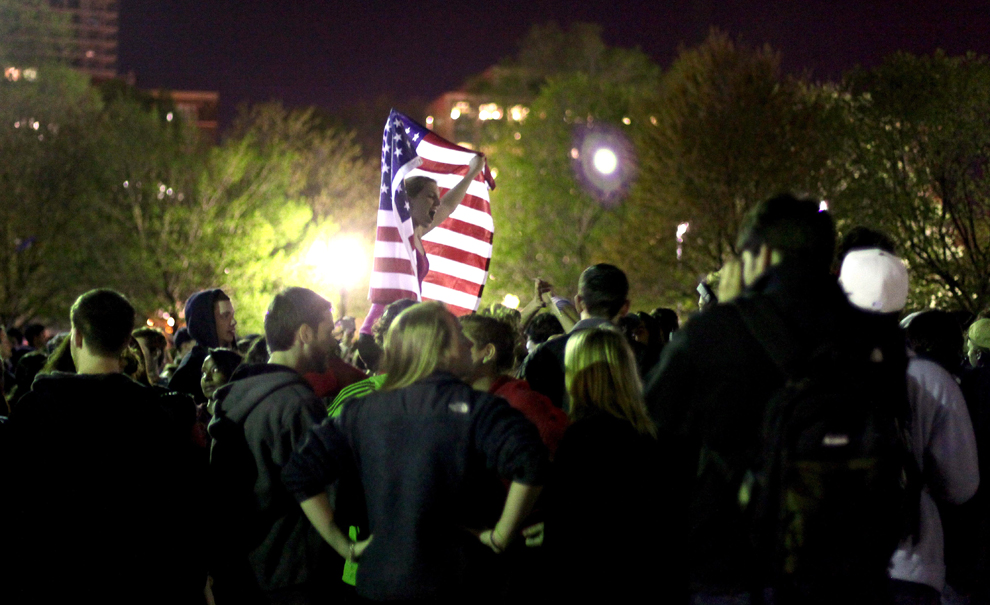 As an American, there are times when I am proud to call myself a resident of this country; like when the national anthem is played before sporting events and everyone stops, going silent for a moment as our hearts catch at the gravity of what we have – I love being American. Hearing the crowds chanting through the city after midnight and knowing that it was American troops that had ended a reign of terror was another such moment.

But if I am being honest. I rejoiced less in the death of Osama and more in the end of the figure-head of terrorism which put us one step closer to ending this war. I cringed at the Facebook and Twitter messages that said things like “Rot in Hell Osama, no one will mourn your passing.” or “A quick death was too good for the monster. He should have been brought to Times Square and beaten to death by New Yorkers.” These, and hundreds of similar messages, rubbed me wrong and left me a little disgusted with the writers. As horrible as this man’s actions were one fact remains… he was still a person. He still had dignity.

I think, our ability to find the value of each person really comes to the forefront in a moment like this. Compared to Osama, it is easy to find dignity in an unborn child or an elder suffering from cancer in the hospital. But if we really are people who find value in every human life, we should never rejoice in the death of someone. Love for each human being is not compatible with ‘an eye for an eye.’

I admit this is easier said than done. My heart waivers between being thrilled that Osama is out of the way and the knowledge that this is due to his killing. I grew up in this war (one that I incidentally didn’t want us to enter into) and can barely remember a time before we were fighting on foreign soil. I watched a close family member go off to Iraq and Afghanistan for three different tours of duty and knew the pride and fear my family felt every time he announced his next assignment. As my younger brother enlists in the Marine’s today, a new kind of pride and fear is created within me. I’d like him to stay state-side and never have to take another’s life to end this war on terror, while at the same time I want him to become a man with strength of character, pride in his country and a desire to protect those who are unable to protect themselves.

To be honest, I don’t know if there was another solution to bringing down the head of terrorism but I do know his loss of life is not something we should take great pleasure in.