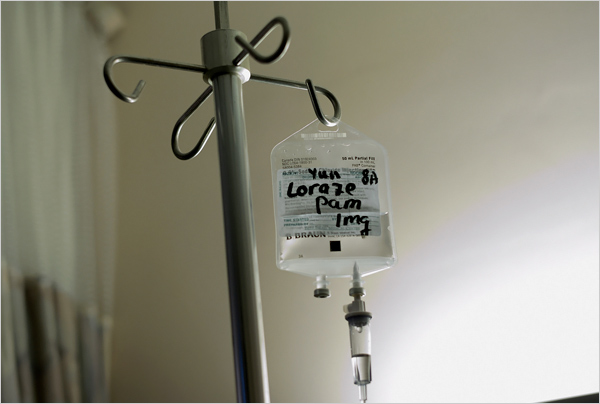 The usual technique of euthanasia is when a doctor administers a lethal injection to a patient. However, when a doctor withdraws life-sustaining nutrition and fluid from a comatose or sedated patient, is this not a form of slow euthanasia?

The issue of whether or not the provision of nutrition and hydration to patients should be considered as medical treatment and, therefore, subject at some level to the discretion of doctors, has received some good press lately.

In Canada, the Euthanasia Prevention Coalition (EPC) fought a legal battle, alongside the family of a comatose patient Mr Hassan Rasouli, to prevent medical staff in a Toronto hospital from removing life-sustaining nutrition and hydration from Mr Rasouli.

An Ontario court subsequently ruled that doctors are required to obtain the consent of either the patient or a substitute decision-maker (such as the patient’s guardian) before withdrawing life-sustaining interventions.

More recently, members of Italy’s parliamentary lower house voted 278-205 to pass a bill that forbids euthanasia or assisted suicide and also requires that patients not be denied life-sustaining food or fluid.

Readers may recall the case of Eluana Englaro, a brain-damaged young Italian woman, whose father campaigned for 10 years through Italian courts to be allowed to stop her food and hydration. Italian legislation had previously been silent on whether nutrition and hydration constituted “medical treatment” or was a basic necessity of life.

The newly enacted Italian law makes the necessary exception to feeding and hydrating in those cases when a patient is in the terminal stages of a terminal illness — this is, when the patient’s body is no longer capable of absorbing or processing food or water, making such life-sustaining efforts futile and even burdensome.

However, this is where we need to be perfectly clear on what the removal of feeding and hydration does to a patient. Other than the sort of case, described above, when a patient is in the terminal phase of a terminal illness, the removal of hydration and nutrition will either starve or dehydrate a patient to death. It can hasten the dying process in unacceptable ways by preventing the patient’s body from being able to repair and sustain itself in such a way that the underlying disease would take its natural course.

But wouldn’t the prospect of patients dying from not being fed or not being hydrated cause a negative public reaction? Think again.

In 2010, an article in the Glasgow Herald uncovered almost routine starvation in Scottish aged-care facilities and estimated that up to 50,000 patients were dying in that manner in British public hospitals each year (Glasgow Sunday Herald, July 4, 2010).

A recent article from The Telegraph in the UK points to the fact that patients are often being sedated, then deprived of food and fluids.

A special scheme, called the Liverpool Care Pathway (LCP) protocols, is designed to improve comfort and care at the end of life. However, as the article reports, for some patients, being put on this “pathway” becomes a self-fulfilling prophecy of death because the subsequent removal of basic sustenance contributes to or causes early death.

This coupling of sedation to removal of food and fluids is often referred to as “terminal sedation”. But what exactly does this mean?

It is a world away from merely sedating someone experiencing unbearable pain — that is, using sedation solely as a palliative tool with a clear palliative intention to relieve someone’s pain and symptoms. This is often used to give a patient respite from pain in circumstances where their underlying illness is not yet terminal.

Sedation in these circumstances, for a day or two, can give the pain a chance to subside. This affords the sufferer great relief. Patients, according to the stage of their disease, will often return to relatively normal conditions of life and, in the early stages, may even return home and resume receiving palliative outpatient services. But, clearly, that’s not what is meant by “terminal sedation”.

Nor is palliative sedation at the end of the progress of a disease — in other words, when the patient is clearly dying. This type of sedation can be managed so that the patient has intervals when they are awake so that they can communicate with family and friends gathered at their bedside.

So, if there are a wide range of circumstances when sedation is appropriate, why are not all types of sedation simply called “palliative sedation”?

I suggest that the coupling of the word “terminal” with sedation refers to the intention and effect, as does the use of “palliative” with sedation. The intention of terminal sedation is that the person dies from the action. The withdrawal of fluids and nutrition seems to be the method which is all too often tolerated by lax laws.

Alex Schadenberg, chairman of the Canadian Euthanasia Prevention Coalition has clarified this source of confusion in a recent blog on this subject (July 20, 2011). He writes:

“The act of deep continuous sedation of a person, who is not yet nearing death, combined with the withdrawal of hydration and nutrition, when death by dehydration occurs — this is an act of euthanasia.

“In this circumstance, the death was not caused by the person’s condition but rather by the intentional decision to dehydrate the person to death.

“This is often referred to as ‘slow euthanasia’ because the death is intentionally caused by dehydration, and yet it takes longer to complete the act of euthanasia than giving a person a lethal injection….

“When a person is terminally ill and actually nearing death, the withdrawal of hydration and nutrition is not euthanasia because the person dies of their medical condition.”

It may be that the use of the word “terminal” in the context under discussion is designed deliberately to confuse. Those who promote doctor-assisted death or euthanasia often blur the natural and obvious distinctions by the use of emotive but otherwise meaningless catchphrases.

For others, the intent of the confusion is less clear. Consider the following from the Alzheimer’s Australia’s recent report on Planning for the End of Life for People with Dementia.It says:

“A recent, controversial addition to the discussion about what is legally allowed in relation to end-of-life care is terminal sedation. This refers to the use of sedative drugs to induce unconsciousness in terminally ill patients in order to relieve suffering, including anxiety, when other attempts at relief have failed. It includes withholding or withdrawing artificial nutrition/hydration.

“… There is currently controversy about terminal sedation and its relationship to euthanasia.…

“Some doctors have described terminal sedation as ‘slow euthanasia’ and claim that it is ethically inferior to euthanasia because it takes patients longer to die, with the potential for further suffering.

“Others disagree and argue that the major concern is patient care and comfort. Some palliative care clinicians prefer the term ‘palliative sedation’, since calling it ‘terminal sedation’ may suggest that it is euthanasia, with the result that treatment for intractable terminal suffering may be under-prescribed.”

It refers to a paper by Toronto doctor, Victor Cellarius, that appeared in the Journal of Medical Ethics (2008), and quotes from the abstract of the paper as follows:

“[I]t is clear that providing terminal sedation in combination with the withholding or withdrawing of life-prolonging treatments such as fluid and nutrition can foreseeably hasten death significantly — what is here called early terminal sedation (ETS).

“There are ethical justifications for the use of sedation in palliative care and thus it would seem that ETS is an ethically and legally acceptable practice.”

However, the Alzheimer’s Australia quotation is selective and highly misleading, because it fails to include the sentences that followed:

“However, what emerges from the literature is the repeated assertion that terminal sedation must be restricted to use in imminently dying patients — the ‘imminence condition’ — and that therefore ETS is unacceptable.

“This restriction has taken on greater significance with the trend of palliative care to include the care of patients who are not imminently dying.”

While Dr Cellarius supports the use of the term “terminal sedation”, he does so in a restricted application to what he calls “imminently dying patients”.

In such usage, “terminal” would merely describe the person’s state, not the intended outcome of sedation. The author further confirms this by acknowledging the use of sedation in patients who are not imminently dying.

It is difficult and probably wrong to attribute motives to those who deliberately use the combination of sedation and the withdrawal of fluids and nutrition to hasten a patient’s death.

There is little doubt that sedated patients are probably a great deal easier to manage, and death by starvation or dehydration in such circumstances has a predicable time-line, whereas death from the underlying disease may not.

With an ageing population and increasing health care budgets, this sort of “nudge-nudge, wink-wink” approach to reducing costs must be a great temptation.