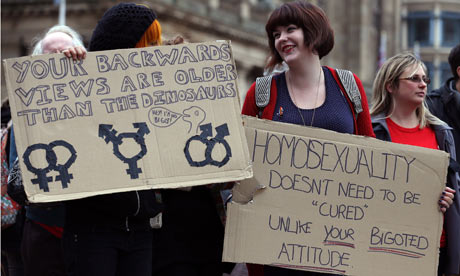 It’s hard for those who see legalizing same-sex marriage as a human rights and social triumph to comprehend why anyone would find the recent US Supreme Court decision in United States v. Windsor, anything but good. And yet, some who are not homophobic and accept that same-sex relations are a matter of personal morality are concerned and saddened by this legal affirmation.

To understand how a person can be against discrimination on the basis of sexual orientation and yet against the current same-sex marriage bandwagon requires stepping back, for a moment, and listening to their reasons.

Extensive media coverage of the Windsor case, as has been true of the general debate, mainly supports the legal recognition of same-sex marriage and lays out the strong case made by its advocates. But valid arguments against its legalization also need to be reported.

And while some people who oppose same-sex marriage vilify homosexuals, the vast majority agree that stigmatization and discrimination on the basis of sexual orientation are horrible wrongs.

So the real issue is whether one can be against such wrongs and at the same time against legalizing same-sex marriage.

The case for same-sex marriage relies on a legal right not to be discriminated against on the basis of sexual orientation and the correlative right to be treated equally; and the emotional pull of the claim to be allowed to marry whomever you love. This right and claim were the heart of the majority judgment in the five to four decision by the United States Supreme Court to strike down provisions of the Federal Defense of Marriage Act (DOMA), defining marriage as a union between a man and a woman. Those provisions had the effect of limiting access to spousal benefits under Federal law to opposite-sex married couples, which, given the facts of the case, many people saw as unfair and unjust.

The case involved an American lesbian couple, both in their 70s, who had been partners for decades. One of them, Thea Spyer, had progressive multiple sclerosis and in 2007 she and Edith Windsor married in Canada, because they were unable to do so in the United States, although New York State recognized their marriage. When Dr Spyer died, Ms Windsor inherited her estate, but was denied the federal estate-tax exemption for surviving spouses, because of DOMA’s definition of marriage.

The Supreme Court held DOMA’s restrictive definition was unconstitutional “as a deprivation of the equal liberty of persons that is protected by the Fifth Amendment”. They ruled that equal treatment before the law required that the couple’s same-sex marriage should be recognized for the purpose of access to federal benefits, in the same manner as opposite-sex marriage.

Of course, cases such as the Windsor one call for a just remedy. But opponents of same-sex marriage believe that the best remedy does not lie in redefining marriage and, thereby, deconstructing it, in fact, they view that as inflicting serious harm.

Same-sex marriage gives priority, as central tenets of marriage, to equality over procreation; to culture over nature in the form of both biological links between parents and children and natural reproduction; to gender neutrality over gender difference in parenting; to legally recognizing diverse family structures over limiting that recognition to the natural family; to individual autonomy over respect for the transmission of human life to the next generation through restricting certain uses of reproductive technologies and surrogate motherhood; and to respect for individual choice over the needs and protection of the community and society.

Because marriage carries the right to found a family and as we can see from the criteria listed above, the central issue in the same-sex marriage debate is how, socially and legally, we define who is a parent and what a family is, definitions which have major impact on children and their rights.

Marriage is an ancient and complex institution and the necessary societal debate on whether it should be changed requires that those opposing same-sex marriage not be denigrated and written off simply as bigots or dinosaurs. I believe that happened in Canada. It remains to be seen what will happen in the United States.

Those who oppose same-sex marriage believe in fairness and may argue other ways to assure equity in cases like that of Ms Windsor. They may, for example, believe that the traditional ideal of marriage should be maintained for the protection of children’s rights and for cultural reasons, while accepting the need to protect persons in other long-term, emotionally and economically dependent relationships. This is not bigoted or discriminatory. It is a position that is defensible and can be argued in good faith. Where that is denied, as Justice Scalia says it was in the DOMA decision, then the discrimination is against those arguing honestly for a position that some see as politically incorrect.

And as all those who have argued for same-sex marriage know, discrimination is a terrible thing.