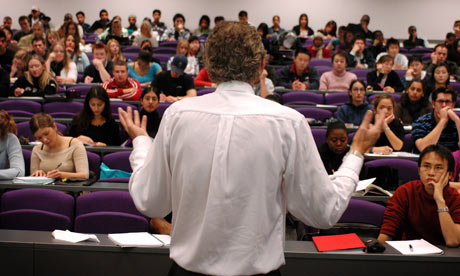 “Is the higher education bubble about to pop? I don’t know,” writes Anthony Grafton in the New York Review of Books. He is reviewing eight books on the American university system — most of them rather doomful. Towards the end he paints this picture of normal student experience:

Imagine what it’s like to be a normal student nowadays. You did well—even very well—in high school. But you arrive at university with little experience in research and writing and little sense of what your classes have to do with your life plans. You start your first year deep in debt, with more in prospect. You work at Target or a fast-food outlet to pay for your living expenses. You live in a vast, shabby dorm or a huge, flimsy off-campus apartment complex, where your single with bath provides both privacy and isolation. And you see professors from a great distance, in space as well as culture: from the back of a vast dark auditorium, full of your peers checking Facebook on their laptops.

It’s no wonder, in these circumstances, that many students never really internalize the new demands and standards of university work. Instead they drift from course to course, looking for entertainment and easy grades. Nor is it surprising that many aren’t ready when trouble comes. Students drink too much alcohol, smoke too much marijuana, play too many computer games, wreck cars, become pregnant, get overwhelmed trying to help anorexic roommates, and too often lose the modest but vital support previously provided by a parent who has been laid off. Older students—and these days most are older than traditional university age—often have to work full-time and care for children or parents, or both. Those likeliest to encounter these problems are also the ones who haven’t been schooled since birth to find the thread that can lead them through the labyrinths of the bureaucracy. They aren’t confident that they will see an invitingly open door, where a friendly adviser or professor is eager to help them, and they don’t have parents hovering, eager to find that helper for them.

Not very encouraging, is it? But as he says in conclusion, it would be more useful to publish detailed pictures of a few universities, to see what is being done well and where the defects lie, than general critiques.

Best of all would be for enterprising publishers to find curious writers and have them describe some universities and colleges, in detail, with all their defects. The polemical books, even those that have some substance, end up slinging mud—which, as Huckleberry Finn pointed out to Tom Sawyer, isn’t argument—more often than laying out the evidence. The empirical studies, with a very few exceptions, are deliberately cast in such general terms, and written in such a value- and metaphor-free style, that they won’t reach anyone without a professional interest. Neither sort would give an intelligent outsider—say, a parent or student, a regent or a trustee—a vivid picture of a year’s life and work at a college or university, as it is experienced by all parties; much less a lucid explanation of how finance and pedagogy, bad intentions and good execution shape one another in the academic world.