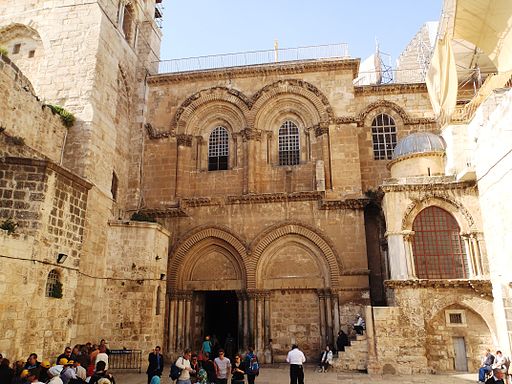 Church of the Holy Sepulchre in East Jerusalem. By Matt0962 (Own work) via Wikimedia Commons

Two days before Christmas the United Nations Security Council adopted Resolution 2334, which demands that Israel stop settlement activity on occupied land on the West Bank and in East Jerusalem. In this article from the Philos Project — a network hub which fosters positive Christian engagement in the Middle East — Shadi Khalloul outlines the historical oppression of Christians under Islamic rule in the region and argues that the UN resolution could lead to the extinction of Christian existence in Jerusalem.

During the Islamic occupation of Israel that began during the seventh century, Christians and Jews were forced to convert to Islam through horrific oppression that included colonization and the resettlement of tribes from the Arab Peninsula in Jerusalem and the rest of the Middle East. These Christians and Jews were indigenous to the holy land of Judea and Samaria, an area that some refer to as the West Bank.

The Islamic occupiers ruled Christians and Jews through strict Sharia laws that branded Christians by requiring them to wear conspicuous, unique items of clothing. The Christians could not build new churches, ring church bells or publicly celebrate special holidays. This treatment was eerily like the marking of Jews in Nazi Germany with yellow badges, or of the anti-Semitic Nuremberg laws of 1935, which contained many of the racial theories prevalent in Nazi ideology. Those pieces of legislation excluded German Jews from Reich citizenship and prohibited them from marrying or having relations with persons of “German or related blood.”

The “Pact Of Umar” – also known as the Treaty of Umar or the Laws of Umar – is an apocryphal treaty between the Muslims and the Christians of Syria, Mesopotamia or Jerusalem. It later gained a canonical status in Islamic jurisprudence. This document (which was reportedly signed by the second caliph, Umar I [634-44], after he occupied Jerusalem) is the source of the restrictive regulations embedded in Sharia and Islamic law that are put on non-Muslims. The spirit of these laws still exists; they continue to be followed in all Islamic and Arab countries and in all current and future state constitutions of the Palestinian Authority. The Islamic State, the Muslim Brotherhood, Hamas and any terror organization that delegitimizes non-Muslims’ right to exist independently in the region also follow the Pact of Umar. Some of those laws are the most racist in human history and have led to genocide, annihilation and suffering for Eastern Christians and Arameans – even today, as evidenced by recent events in Lebanon, Syria and Iraq, and by the treatment of the Jewish indigenous population inhabiting the Fertile Crescent and Israel.

The “Jerusalem Pact of Umar,” which was created after Islamic forces conquered Jerusalem in 638 A.D., contains similar racist apartheid laws prohibiting Jews to live or exist within the city of Jerusalem. Likewise, the “Damascus Pact of Umar,” written around the same time period, treated Christians as second-class citizens in comparison to their Muslim counterparts.

Under the Pact of Umar,

1. Christians were forbidden to build new places of worship or rebuild churches or monasteries that had been destroyed during the Islamic conquest.

2. Churches were required to shelter any Muslim, day or night, without compensation, and could not hang crosses. They had to widen their doorways so that any Muslim trespassers could walk through at any time, reducing the church’s sanctity.

3. Christians could not attempt to persuade their family members against submitting to Islam.

4. Christians could not dress same as Muslims. They were required to dress in unique clothing that included a special belt. They were also required to cut their hair a certain way to differentiate them from Muslims.

6. The houses of non-Muslims were required to be short so that every time the owners entered or exited, they would have to bend in a way that would remind them of their low status in the world.

The pact also included many other racist conditions that still exist today in most Arab states. These laws forced Christians and Jews to submit to Islam, and in the process, those individuals lost valuable knowledge of their shared roots and lineage.

Since the end of Second War World and the signing of the Sykes-Picot Agreement, the world has witnessed the attempted organization of the Jewish Zionist movement and the Christian Maronite Lebanese movement. The ultimate goal is the creation of a haven for persecuted people in their ancestral homelands – the land of Israel and Mount Lebanon. Not only have both groups tried to establish their own states, but their common pasts as persecuted minorities under Islamic rule have brought them closer together. The Jews succeeded in creating a state, and have increased in numbers. Seven million Jews now live in their historical homeland. But the Christian Maronites – who were once the majority of the country of Lebanon – now make up only one-third of the nation’s population.

In 1948, the United Nations recommended partitioning the land of Israel, allowing two states for Jews and Arabs. The Arabs rejected the proposed partition and started the First Arab-Israeli War. Jordanian forces occupied Judea and Samaria (the West Bank), killing many Jews who lived in Hebron, Gush Etzion and the Jewish quarter of Jerusalem. The Jordanians subsequently illegally occupied those areas until the Six-Day War of 1967. Arabs in this area of the West Bank were satisfied with the Arab Jordanians’ control, and did not ask for Palestinian freedom or sovereignty. But that changed after the 1967 war.

Many Galilean Christians – who some call Palestinians – are in fact Aramean Christians who have Levantine roots and do not identify themselves as either Palestinians or Arabs. This Arab (Islamic)–Jewish conflict is similar to the Arab (Islamic)–Christian and Maronite conflict in Lebanon. Only after they lost the 1967 war did the Arabs of Judea and Samaria begin to call themselves Palestinians, in order to justify the creation of a 23rd Arab state similar to the already established non-democratic Arab states like Syria and Iraq. But is this truly needed? Would humanity and spreading democratic values actually benefit from such a step?

It is true that there is an Arab population currently living on historical Jewish land, but it can’t be denied that Arabs settled this land – including Jerusalem – only after they had oppressed the Jews and Christians who had already been living there.

A Jerusalem existing under Jewish control of the State of Israel could prosper and endure as a home for all religions and a haven for all nations. Unfortunately, Christians in Jerusalem will disappear if East Jerusalem, along with its holy sites, is passed on to Arab control. Those Christians will go the way of the persecuted and disappearing believers of Bethlehem, Ramallah and Gaza. It is important to understand that this would hinder Christians’ abilities to pilgrimage freely. The original purpose of the crusaders’ holy war (1095–1099), which occurred 400 years after Islamic occupation of Jerusalem (638 A.D), was to release Jerusalem and save its Christian western pilgrimage rights and population.

We Christian Israelis are desperate to prevent history from repeating itself, and we implore the international community – including the United States – to learn from history before it is too late. We urge that international community to stand with Israel and support our basic rights as Israeli Christians and Jews to preserve and keep our holy sites in East Jerusalem under the Jewish democratic State of Israel.

Christians living in Israel enjoy the same democratic human laws as all other non-Jewish citizens; their community is consistently increasing as they experience the freedom of the Jewish State. Before providing any assistance to the Palestinian Authority or rushing to create another Arab state on historical Jewish land, the West should put pressure on Arab leaders to assure democratic human rights, security, equality and freedom for the Christian community and the Jews who might live under their control.

Democratic Jewish Israel will prevail. Israel is not the problem; Israel is the solution, and is the key for stability. United Nations Security Council Resolution 2334 is bad for Christians, Muslims and Jews, and should be rejected. The Israeli Christian Aramaic population calls on the West to stand with justice and truth, and to support Israel.