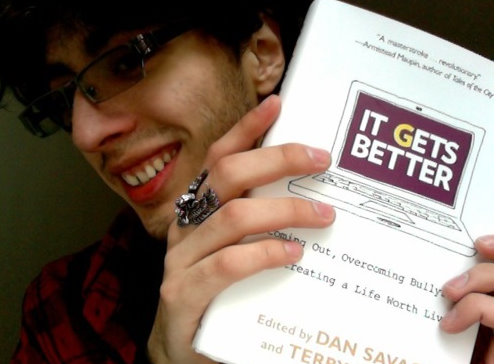 For LGBT teens who face adversity and intolerance…
There’s no place in society for hatred and bullying…
You have an amazing future in front of you…
And an entire community in your corner…
We promise you. It gets better.

(From the It Gets Better video by the
San Francisco Giants baseball team.)

What’s not to like about the It Gets Better Project?

After all, bullying is bad. Compassion
is good. And who could object to offering hope
(to suicidal LGBT youth) and insisting on change
(from a hostile, bullying culture)?

Especially when the project Saves Lives.

So what’s not to like? Plenty. For
starters, it’s the brainchild of Dan Savage, “America’s
leading sex-advice columnist.” (Sample his advice here. Warning:
graphic.)

The It
Gets Better Project caught the cresting wave of media interest that
followed several tragic
suicides of gay teens. Savage and
his gay partner, Terry Miller, posted a YouTube video with an ostensibly
simple message to LGBT youth: hang on, don’t kill yourself, life gets better.

One-and-a-half million hits later, the original YouTube video
has become a full-fledged campaign with over 23,000 videos (from LGBT adults,
supportive corporations, and celebrities, including President Obama), totaling over
60 million views. To reach students who lack YouTube or Internet access, Savage
and Miller chose over 100 testimonies for the book
version, It Gets Better: Coming Out,
Overcoming Bullying, and Creating a Life Worth Living. Thousands of people have
donated copies of the book to local schools or libraries, expanding the reach
of the message.

In spite of the project’s spin, it awakens
much-needed compassion for adolescents who endure humiliation, physical
brutality and extreme loneliness because of their appearance or sexuality.
Their pain is real and, for many, the suffering intense and prolonged. Preventing
teen suicides is vital work. And we should affirm the essential goodness,
value, and lovability of every person.

But that’s not what the project is about.

It
Gets Better (IGB) is an agenda-driven campaign that caricatures traditional
morality and religious people, drives a wedge between parents and children, and
aggressively promotes deviant sex.

In a May 2011 speech
to Google employees, and in a July 2011 New
York Times interview, Savage brags that the
“subversive,” culture-changing goal of the campaign is to “pull an end run around people who are trying to isolate their queer
kids from information, from queer adults, [from] the idea that you can be a
happy LGBT adult.”

Savage confesses himself “obsessed” by the thought of reaching middle school and high school
students with a “sex-positive” message. Driven to share the “joys” of the LGBT lifestyle,
Savage already speaks regularly on college campuses, to “undo abstinence
education.” He aims now to reach young adolescents—12,13, 14—and those teens
whose “bullying“ parents (i.e., religious parents) are least likely to approve
of the LGBT lifestyle.

The genius of his approach, using YouTube,
Facebook, and the Internet (plus the public schools) is that, “We’re talking to these kids whether their parents want us to
or not…they can’t stop us anymore.” Thanks in part to the Google Chrome ad, which
aired during the NBA finals, his message has already reached millions of kids.
As a result, Savage declared, “you can see LGBT kids getting the
support from the online community that they’re not getting at home.” (Savage admits
that there’s been no overall rise in LGBT suicides, but rather increased media
focus on the issue.)

The It Gets Better project professes to help LGBT young people picture what their lives might be like as openly gay adults.

But what are its real messages?

Savage sets the tone for the IGB book in
his Introduction, which blasts the attempts of “homophobic parents and bigoted
‘Christian’ organizations” (p.4) to “prevent their children from growing up to
be gay—or from ever coming out—by depriving them of information, resources,
support, and positive role models.” (p.3). In his New York Times podcast
interview, Savage argues that, “the religious right” sees “every gay youth
suicide [as] a moral and rhetorical victory.”

He accuses
religious leaders of “driving the LGBT suicide rate up” by encouraging families
to be “hostile” to LGBT teens (teens who feel rejected have higher suicide
rates). Similarly, in the IGB book, writer Randy Roberts Potts (p. 182) draws a
bead on Evangelicals, with the accusation that, “While the Evangelical
community might not pull the trigger when one of their gay members commits
suicide, they provide the ammunition.”

With few exceptions, the essay writers tell
of religious parents or grandparents who were bigoted or homophobic. Religious
parents come off positively only when they show support by welcoming their LGBT
child’s lovers.

2. Families who oppose homosexuality are bullies; the
LGBT community is your “family”

Contributor Cameron Tuttle, from San
Francisco (p. 131), captures the LGBT perspective on bullying, a perspective
woven throughout the book and videos: “Bullying isn’t just what real people…say
to you or try to do to you. Bullying is everywhere…in the words of fearful,
judgmental parents who try to control you…in the words of well-meaning but
misguided parents who are trying to ‘protect you from being hurt.’”

The IGB project not only labels parents as
harmful bullies, it also plays on teenage feelings in ways that alienate lonely
adolescents from their parents, siblings, and religious communities. You’re different. You feel alone. Your
parents don’t accept your true self. At the same time, the LGBT community
offers its panacea: We will be there
for you. We understand you. We will welcome you with open arms (and
make no demands on you). Writer after writer stays on-message: find your own
community of people just like you who will accept you as you are. And, as lesbian
journalist Jessica Leshnoff wrote, “[I]f your family doesn’t wind up accepting
you, families don’t always have to be blood relatives. We can make our own
families.” (p. 251).

The LGBT culture is all about sex. And by
design, the project showcases the sexual proclivities of LGBT folks, where nothing
is off-limits or immoral. The public outcry in the wake of the LGBT teen
suicides emboldened Savage and his fellow activists: they felt no need to “sanitize”
the community in order to win followers and supporters.

The original It Gets Better video
shows Savage and his partner snickering over memories of their initial meeting,
which included a proposition for oral sex. Savage boasts
that he refused the requests of high school guidance counselors to delete the oral
sex reference from the video because “people with pretty mouths eating you is
one of the ways ‘it gets better.’” (And he wonders why parents don’t want LGBT
mentors for their kids.)

LGBT sex is presented with no moral limits,
save one. It Gets Better essay writer, a
transsexual (male to female), self-styled gender outlaw, Kate Bornstein, offered teens
this advice (on video and in the book):

Bornstein purports to assuage the guilty
consciences that result from homosexual activity by offering teens a “Get Out of Hell Free” card
(her own creation).

Other than Bornstein’s tongue-in-cheek
mention of hell, or the writers who mock the ranting bigotry of “hellfire” and
brimstone preachers, the project keeps silent about the negative practical
consequences of the LGBT lifestyle. No mention of STDs, HIV, AIDS, rates of
drug abuse, domestic violence, and infidelity.

Take Mark King, for example. In the IGB
book, he and his brother reassure “young gay guys out there who are wondering
if life gets better” after being bullied in school, that “it gets a lot
better.” (p. 300)

But what’s the gay community really like, in Mark’s estimation? He wrote
an article for Newsweek
lamenting that “[r]ecovery centers are teeming with
gay men battling meth addiction, and the drug has a very tight, culturally
specific hold on them. [It’s] …the drug of choice among gay users.” Because of
the drug’s cachet as “a sexual liberator,” King writes, gay men using meth use engage
in reckless “bareback” sex (without a condom), contributing to the spread of HIV.
Meth use is the gay community’s “sad
scourge…our shameful secret.” King, who was addicted to meth for 8 years, is also HIV
positive. (Studies report that gays and lesbians have triple the drug abuse
rate of the straight population.)

No mention of all this, of course, when
Savage, King, and company invite adolescents to experience the gay life that
“gets better.” LGBT teens might consider instead the perspective
of another gay man who said, “too many young gay
men are still being mentored in gay communities on their knees or backs. This
has to stop. There have to be better ways to ‘be gay’ than just drugs and sex.”

And that’s the real travesty of the It
Gets Better Project: it fails to offer LGBT teens a better way, an authentic solution
to their pain. Instead, the project proposes the false dichotomy of suicide and
despair, on the one hand, and an unfettered embrace of the homosexual
lifestyle, on the other.

Mary Rice Hasson is a writer
and attorney from the Washington, D.C. area.