Until recently, the Centers for Disease Control (CDC) reported that the failure rate of Fertility Awareness-Based Methods in avoiding pregnancy was 24%, This figure would discourage most couples from using FABMs and would prevent doctors from recommending them.

Earlier this year, they changed this posted rate to “2% to 23%” which is a major change for the industry.

The CDC cites a 2018 analysis of FABM research (see note #2) that reveals that, for instance, the Marquette method of natural family planning could result in as low as a 2 – 6.8% failure rate. According to the agency's data, that’s at least as effective as the Pill, patch, ring, or injectable birth control methods — and it helps couples achieve pregnancy. Other studies have shown that FABMs such as the ovulation method and the sympto-thermal method can claim comparable effectiveness rates.

What does the change mean for women and couples and for those who speak about these methods? What should we do next to ensure these methods continue to be acknowledged?

Previously, the CDC published the figure of a 24% failure rate based on a 2011 study which cited a single rate for all methods, based in turn on two surveys from 1995 and 2002. In the surveys, women were asked to recall what method they used when they were trying to avoid pregnancy.

Older, low tech methods were put in the same basket as modern standardized and proven methods such as the Sympto-Thermal Method and the Ovulation Method. In fact, 86% of those whom the study identified as fertility awareness methods users stated they used the calendar rhythm method—a much older and less tested method developed in the 1930s—as their primary form of contraception (1).

Last year, we launched a petition to invite the CDC to revise their rating on fertility awareness-based methods. We collected more than 14,000 signatures (8,000 in our first campaign and more than 6,000 in our second). We never sent the petition to the CDC because we were hoping to reach 20,000 signatures first. But it may have sent a message to the leaders of this high profile organization.

A new study was done which is now quoted in the CDC report. This new study reviewed 53 previous studies that measured pregnancy rates of women using FABMs and rated the studies based on a set of quality standards. Some of these standards are similar or identical to those used in the research review by the FACTS organization published in 2013. In this study researchers found at least one high-quality study for each method with unintended pregnancy rates ranging from only 2 -14%.

Overall, these reviews gave the CDC confidence that there was enough evidence that all FABMs were not born equal.

Indeed, it was unfair not only to the methods but to women and couples to give the impression that FABMs are generally ineffective at avoiding pregnancy, without taking a closer look at each one.

These modern methods of natural family planning, based on the daily observation of women’s biomarkers, have no side effects, they help women better know and better understand their own fertility, and they promote closer couple relationships and communication.

What the CDC change means

The change may seem subtle. After all, 2% to 23% is a wide range. But remember that as the single most influential authority on all matters of health in the United States, the CDC has a far-reaching impact. The inaccurate 24% failure rate was quoted by all media outlets any time they reported on fertility awareness-based methods or on increasingly popular apps using them.

It is likely that the same reference was used by doctors to discourage many women from even thinking about natural methods of family planning if they were hoping to postpone a pregnancy.

But given the CDC’s updated information, it is now officially inaccurate to simply say all FABMs are ineffective. In the words of the CDC “Failure rates vary across these methods. Range of typical use failure rates: 2 – 23%.” In other words, some methods are highly effective.

The CDC created categories on their chart giving the effectiveness rates of all contraceptive methods. A typical rate of 2% puts some of the FABMs between the Tier 1 category (less than 1%, like IUDs or implants) and the Tier 2 category (4 to 7%, like the Pill, the patch, the ring).

This new rating forces the media and doctors to consider the modern methods differently and to report it accurately. 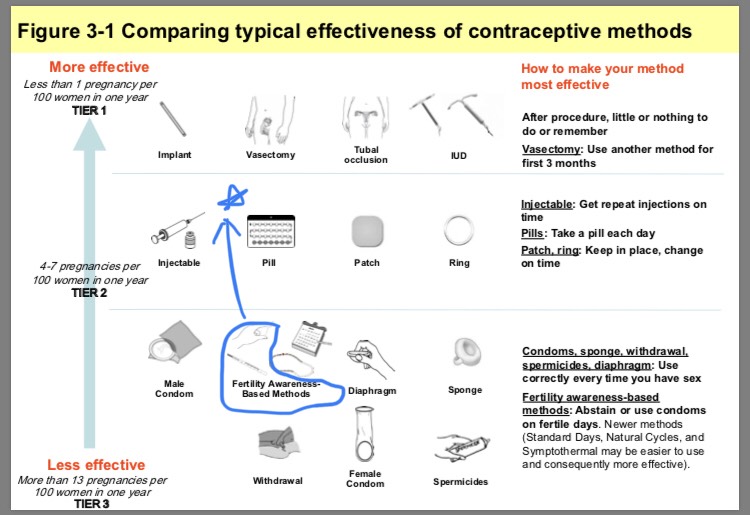 A suggested edit of the CDC’s graphic.

What still needs to be done

First, we want to celebrate this change. It is a great step toward progress and availability of Fertility Awareness-Based Methods to women. We also want to make sure the change is noticed and understood. (If you want to share in this mission, please see the note at the end of this article.)

However, we don’t think the CDC’s change is complete. Our concerns are:

* The CDC’s graphic chart, which is the first thing that shows up on Google and which most people will look at, still doesn’t make the distinction between Fertility Awareness-Based Methods of differing effectiveness rates. It would be more accurate to move the thermometer and the mucus graphic together to the Tier 2 category than to keep it in the Tier 3 category where it currently appears alongside options like the “withdrawal method.”

* It would be more helpful to mention specific methods.

* In their short narrative about the methods, the CDC explains that “you have about nine fertile days each month.” This can be misleading for couples trying to achieve pregnancy since the actual physiological window of fertility is only 6 days long every cycle, while for couples trying to prevent pregnancy the average period they need to avoid sexual relations is 9-11 days.

We hope that the CDC will consider these changes. Our plan is to write to the agency to share the results of the petition and ask for these factual updates.

There’s a lesson in all this for those of us who want an even playing field for natural methods of fertility regulation.

Some changes happen because the ruling authorities decide so, but most changes take place because they make sense to the men and women on the street. We believe that with continued awareness and education, more people will see the benefits of using fertility awareness-based methods instead of birth control drugs with many side-effects.

* Natural Womanhood encourages readers to spread the word. For this purpose, we wrote a sample letter that can be sent to your own doctor or to local news outlets. Feel free to personalize it with your own words and experience or simply to send it as is on our behalf (if you personalize and sign it, please remove the Natural Womanhood logo).

Gerard Migeon is the founder and CEO of Natural Womanhood. The above article is a slightly edited version of the original.