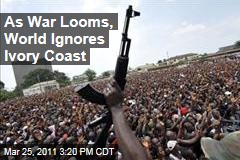 The civil war no one was paying much attention to over these past several months finally made it to the public radar of some world media because it’s reached critical mass….murder.

This has gone too far for too long and with too little intervention. I’ve been following it for months, and lately especially on BBC World Service on satellite radio, along with other crises of the moment. This BBC report spells out many details, but it doesn’t reveal the scope of the massacre.

This CNA piece does.

While cease-fire negotiations are underway in the Ivory Coast, Vatican charity Caritas Internationalis condemned violence in the country that killed 1,000 civilians over the span of three days.

In recent days, the violence has come from both sides, and just surviving the terror is the best locals can hope for right now.

Bishop Gaspard Béby Gnéba of Man, told the Vatican-based Fides news agency that in addition to the deaths, local buildings–including Church facilities such as parishes, schools and health clinics–have been looted and destroyed.

Conflict had also moved to the economic capital of Abidjan, as Ouattara–backed by U.N. forces– launched an aggressive effort to seize control of local towns.

“The situation is calm in the sense that the shootings have reduced, but it is a disquieting calm, not at all reassuring. It is very tense,” Archbishop Jean-Pierre Kutwa of Abidjan told Fides.

Archbishop Kutwa expressed shock over the level of assault conducted by forces aligned with Ouattara.

“The people are barricaded in their homes. In some districts they have no water, electricity or food … It is an indescribable tragedy.”

God help them. And Caritas.