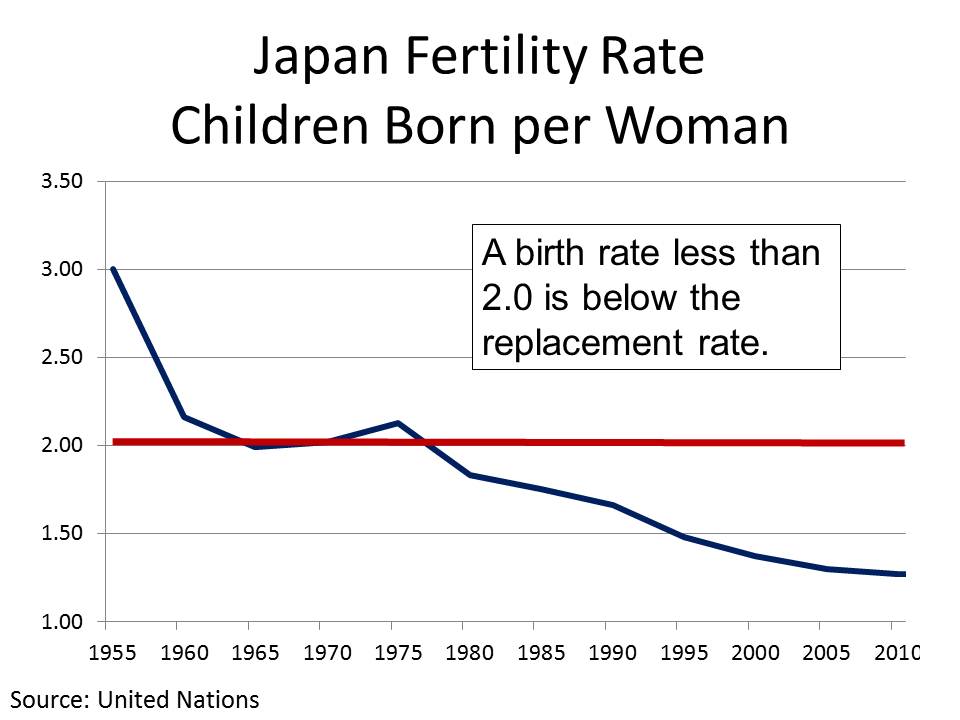 Japan is finally starting to sit up and take notice of its fertility dilemma.  Adding to our discussion of Japan recently on the blog, a Japanese government panel investigating solutions to the problem released its proposals on Tuesday this week.

The proposals reflect fears among the business community that unless urgent measures are actioned Japan could face an economic crisis.  Akio Mimura, the panel’s head, prominent Japanese businessman, and chairman of the Japan Chamber of Commerce and Industry stated that he hoped “the government will share our sense of crisis”.  He further warned that Japan’s population will decline by 1 million per year in the early 2040s, a sharp drop that the country has never experienced before.

The panel proposed setting a goal to maintain a population level of about 100 million 50 years from now – a specific target thought to be the baseline from which Japan would still be able to provide basic government services at current levels.  The population is currently 127 million, and is projected to fall to about 87 million in 2060 if the birth rate remains low.

It also suggested that it is necessary to count all people under 70 as part of the working-age population – meaning the retirement age would be raised to this level.  The panel emphasised promotion of the active participation of women in society, as well as measures which would help women to have and raise children.  I’m not sure what these were, but one hopes that they are not only day-care related!

Again, the panel largely avoided immigration as a solution – the only thing likely at this point to really sustain Japan’s population. Japan has historically valued maintaining an ethnically homogenous population – something that it may not be able to do, and also survive as a country, for much longer.  It did however suggest in this report that foreign skilled workers with specific know-how should be accepted in to the country to boost economic growth.

Many commentators suggest that Japanese culture is too far down the road of low fertility to quickly turn around now.  The culture is not one of having children and it will likely take years to turn something so engrained around. However, it is certainly positive that more supportive family measures are now being considered – albeit that it takes the economy to get people acting!  Let’s hope it encourages and supports family there, and takes some of the emphasis off high stress corporate jobs.