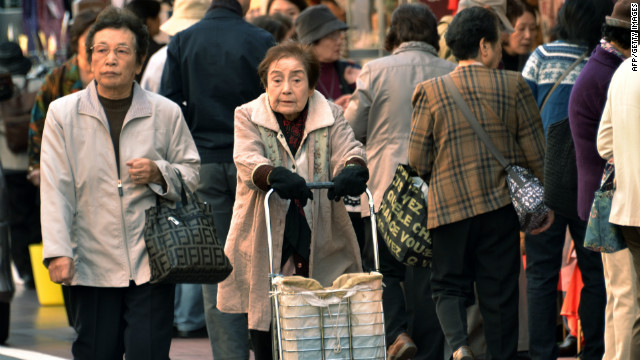 We discussed Japan’s continuing population decline last month on this blog and the attempts being made by the Abe government to try and reverse the trend.  Today we’re going to revisit the Land of the Rising Sun since its internal affairs and communications ministry celebrated Children’s Day by announcing that the number of children under the age of 15 years old is estimated to be 16.33 million. This is 160,000 fewer children than last year and means that for the 33rd year in a row the number of Japanese Children has declined. It is also the lowest number reached since records began in 1950.  It means that Japanese children account for 12.8% of the population while those aged over 65 years old made up 25.6 per cent of the population (a record high).  By way of contrast, the percentage of children in the USA is 19.5% and 16.5% in China.

The Wall Street Journal recently discussed the downward numbers of children and came to the conclusion that the best options for Japan were large-scale immigration or, failing that, getting the Trans Pacific Partnership (a multi-lateral trade agreement up and running).  Joseph Sernberg argued that other solutions are shorter fixes only:

“Neither of the two most commonly cited solutions to this problem is satisfactory. Increasing the proportion of the working-age population that is actually working, especially by boosting the shockingly low female labor-force participation rate, will help in the near term. So will raising the retirement age so that Japan’s wondrously healthy elderly stay in the labor force longer.

But there’s a limit to the long-term efficacy of either measure. Both women and the elderly die the same way today’s cohort of working-age men eventually will. A consequence of having too few babies is that even if the labor participation rate reaches an unrealistic 100% in the future, the number of Japanese who are working will still eventually fall to below the number who are working today.”

The better longterm solution – increasing fertility rates and dramatically increasing the scale of immigration to Japan – will flounder because of the Japanese people’s blasé attitude to population decline.  Sternberg claims that:

“Reporters can reliably find (elderly) interview subjects to aver that life won’t really be so bad. It will be less crowded, and per-capita incomes will be stable. And allowing foreigners in, the subtext goes, will make the country’s famously orderly existence far too chaotic.”

Why would the TPP have been a good, more politically palatable solution? Because it would have increased the productivity of Japan’s workers by opening up the economy to competition, particularly inefficient areas of the economy. Secondly:

“investment liberalization … would benefit Japanese companies in other TPP countries. Nicholas Smith of CLSA has noted that TPP would open new doors for outbound Japanese investment by clarifying intellectual-property protections, cutting back on favoritism for local champions in other markets, and facilitating the tariff-free export of goods produced by Japanese-owned factories in third countries.

In a sense, TPP would have been a form of non-immigration-reform immigration reform. If importing Malaysian or Vietnamese workers to labor in Japan is not an option, the next best thing would be to make it easier for Japanese companies to hire those workers somewhere else. Those workers would essentially support Japanese in Japan to the extent that companies could then repatriate their profits to pay wages and pensions.”

However, the TPP has stalled due to “Washington malpractice and Tokyo intransigence”.  Thus Japan seems to be forced back onto either softening the economic blow through productivity gains, hoping for a surprising fertility turnaround, trying to change the public’s attitude to immigration, or letting the country slowly get older, poorer and smaller.