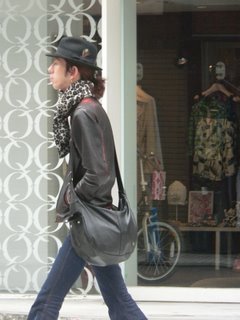 A new breed of Japanese men is provoking a national debate about how the country’s economic stagnation since the early 1990s has altered men’s behaviour, and whether or not it is a bad thing. Known as soushoku danshi, or “grass-eating boys”, the young men in question are notable for their lack of interest in women and consumerism.

They like pottering around the house and going for walks. Some of them spend so much time playing computer games that they prefer the company of cyber women to the real thing.

“In this age of bromance and metrosexuals, why all the fuss?” asks Alexandra Harney, a regular commentator on Japanese television, in an article in Slate:

“The short answer is that grass-eating men are alarming because they are the nexus between two of the biggest challenges facing Japanese society: the declining birth rate and anaemic consumption. Herbivores represent an unspoken rebellion against many of the masculine, materialist values associated with Japan's 1980s bubble economy.”

Surveys suggest that among men in their 20s and 30s, between 40 per cent and 75 per cent consider themselves herbivores. They are more likely to want to spend time by themselves or with close friends; they are often close to their mothers and have female friends, but they're in no rush to get married themselves, according to Maki Fukasawa, the Japanese editor and columnist who coined the term in NB Online in 2006.

Shigeru Sakai of Media Shakers suggests that grass-eating men don't pursue women because they are bad at expressing themselves. He attributes their poor communication skills to the fact that many grew up without siblings in households where both parents worked.

“Because they had TVs, stereos and game consoles in their bedrooms, it became more common for them to shut themselves in their rooms when they got home and communicate less with their families, which left them with poor communication skills,’ he wrote in an e-mail. (Japan has rarely needed its men to have sex as much as it does now. Low birth rates, combined with a lack of immigration, have caused the country's population to shrink every year since 2005.)”

Changes in work have also played a part; the rise of the female executive has dampened macho office culture. More important has been the collapse of Japan’s economic bubble and the salarymen with a job for life who could afford to woo a woman with luxuries. Now, nearly 40 per cent of Japanese work in non-staff positions with much less job security.

"When the economy was good, Japanese men had only one lifestyle choice: They joined a company after they graduated from college, got married, bought a car, and regularly replaced it with a new one," says Fukasawa. "Men today simply can't live that stereotypical 'happy' life."

What about the gay factor?

Ms Fukusawa says that while some may be, the behaviour of the grass-eating men has more to do with rejecting the traditional Japanese definition of masculinity and what she calls the West’s commercialisation of relationships, under which men needed to be macho and purchase products to win a woman’s affection. She sees the new trend as positive and harking back to pre-World War II Japanese society.

Not surprisingly, there is talk of a new trend among women — “carnivorous girls”, who are pursuing men more aggressively. Will they be the answer to Japan’s slide into a grey and sterile future?