As we have seen in the preceding articles of this series, sixteenth-century Christendom was a very musical milieu. Each of the “new” Protestant confessions was developing its own repertoire and style of communal singing; the “old” Catholic Church was rethinking its own traditions, whose value had been reasserted at the Council of Trent, but without precluding in any way the experimentation of both artists and pastors. And, indeed, the musical experience of sixteenth-century Catholics was as varied as could be.

In that century, new religious orders were founded. St Ignatius of Loyola had gathered the first members of the Society of Jesus (the Jesuits) and, while he was a great music-lover himself, he was at first very wary about the time-consuming musical worship which could distract his fellows from preaching. He even had a rather harsh discussion with the Pope on this subject.

The Pope insisted that all religious men and women had to sing the entire Divine Office, while for Ignatius this applied only to monks and nuns. The members of his Society were not monks, he argued, and therefore a spoken Office should have sufficed. In the end, a compromise was sought, and the first Jesuits did sing the Office, but in a rather speedy and uncomplicated fashion, the so-called fauxbourdon.

In spite of this, the Society of Jesus was very active in promoting musical activities, particularly among the young people who attended its colleges, both in Europe and in farther countries. In Europe, the Jesuits organized splendid theatrical productions with music, which allegedly moved the hearers so deeply that many were converted.

A number of touching accounts also come from missions in Asia and the Americas, as well as from more remote rural zones of Europe. Here, music was employed by the Jesuits to teach catechism to the children and their parents; many mothers were moved to tears when they could learn, together with their young, the sung prayers. The missionaries used to cross the villages with bells and singing, and gathered their pupils who enthusiastically listened to songs about the Creed or the Lord’s Prayer, and eagerly repeated them. Sometimes, such prayers could be recalled in very different situations, where festive catechism teaching was brutally replaced by the violence of martyrdom: the Japanese child-martyrs, for example, joyfully intoned the Laudate pueri (plainchant version, which the Japanese martyrs most likely sang, here; Palestrina setting here) while they were being crucified. 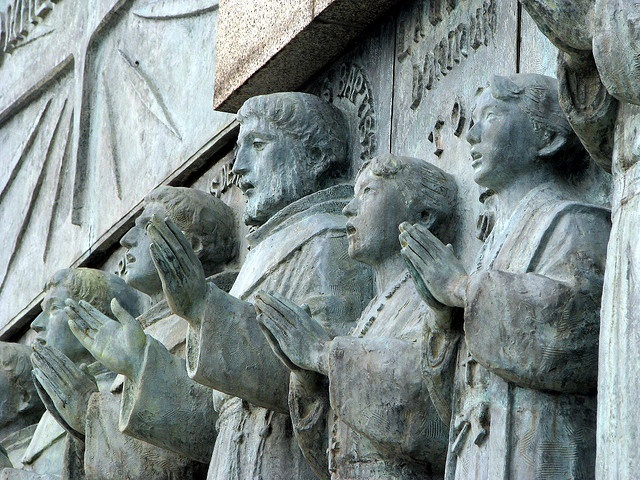 Detail from a monument in Nagasaki, Japan, depicting 26 Christians,
including two teenage boys, martyred in 1597

Philip Neri and the birth of the oratorio

Another founder of a religious order, St. Philip Neri, was passionate about music and shrewdly used it for spreading the word of the Gospel. His “oratories”, which were religious buildings frequently attached to churches but also distinct from them, were frequented by people of all social backgrounds, who sang together the beautiful laude and created performed liturgies with music. These were the forerunners of the “oratorios”, a musical genre whose most famous example is probably Handel’s Messiah, but whose roots are found precisely in Neri’s Roman oratories.

If two of the greatest Catholic reformers of the sixteenth century were so interested in music, so were others who did not found religious orders, but nonetheless impressed a strong mark of their personality on the post-Tridentine Church. The two Borromeo Cardinals, St. Charles and his cousin Federigo, were very concerned about liturgical music. Borromeo recruited some of the best musicians of his time and encouraged them to write musical settings of the Catholic liturgy whereby the words could be distinctly heard and comprehended. Though this was not a directive that emanated from the Council, Borromeo seemed to consider intelligibility as a crucial issue; the Masses of the composers who cooperated with him in Milan bear titles such as “in conformity with the Council’s decrees”, and represent an artistic embodiment of this post-Conciliar concern.

Perhaps closer to the Council’s actual decrees was the stance of Federigo Borromeo, whose pressing interest was to foster the “piety” of his flock: indeed, “piety” became one of the central issues in devotion and spirituality, in the Catholic Church but also in many Protestant communities. Federigo encouraged musical practices as a means to achieve a deeper mystical understanding of faith; by singing God’s praises, the faithful could be drawn closer to Him in a gentle and yet powerful fashion.

The reform of Church music did not interest just priests and cardinals, however; a great many laypeople were directly involved in these topics. Among them was the Duke of Mantua, a powerful local patrician, who built a sumptuous “Chapel” (which is in fact a large basilica) dedicated to St. Barbara. He wanted his Chapel to become a torch-bearer of the Catholic Reformation, and he understood that a proper musical liturgy was essential for this goal. Thus, he created, together with his musicians and his priests, a new rite, peculiar to the Chapel.

A minor difficulty for the Duke arose from one of the few things that the Council had actually established as regards music: the Roman rite was to be adopted everywhere, unless local rites had been practised for at least two hundred years. He sought approbation for his new rite, and, of course, found it difficult to have it sanctioned; his argument – a masterpiece of diplomacy – was that the new rite could obtain an “early” approval, predating by mere two hundred years what would later be granted…

Amusing as the Duke’s initiative may be, it bears witness to a climate in which new roads were sought, new paths opened, but without denying the rich tradition of Catholicism. Some of the greatest Catholic musicians of the time were very actively engaged in the reform of music: Palestrina and Zoilo were asked by the Pope to revise the Catholic plainchant, while Victoria, Lasso, Guerrero and many others were giving musical shape to the deep mysticism and profound devotion of post-Tridentine Catholicism.

Some of these composed pieces for several Christian confessions: indeed, as we will see in the three forthcoming articles of this series, the distinct features of confessional music were sometimes overshadowed by the similarity of many of their traits.

Dr Chiara Bertoglio is a musician, a musicologist and a theologian writing from Italy. She is particularly interested in the relationships between music and the Christian faith, and has written several books on this subject. Her new book, Reforming Music: Music and the Religious Reformations of the Sixteenth Century, was published earlier this year by De Gruyter. Visit her website.

Earlier articles: (1) Reforming music: harmony and discord in the 16th century (2) Pre-Reformation church music: plainchant, polyphony and popular songs (3) Polyphony? Or cacophany? Prelude to a reformation in church music (4) Reformation music: how the Word became words. (5) Lutheran songs: a musical gift for all Chistians (6) The Genevan Psalter: Calvin’s musical reformation (7) Musical chairs: monarchs and church music during the English Reformation. (8) ‘God has a good ear for music’: the Catholic response to Reformation music.