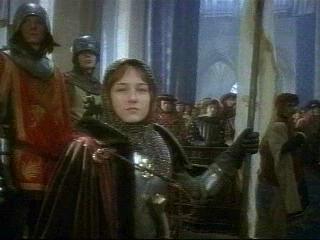 The feast day of this fearless woman is May 30. So why was Pope Benedict devoting attention to her in his Wednesday audience this week?

Because she was such an outstanding example for current times.

“This young French peasant girl’s compassion and commitment in the face of her people’s suffering were made even more intense through her mystical relationship with God. One of the most original aspects of her sanctity was this bond between mystical experience and political mission,” said Benedict XVI…

“Liberating her people was an act of human justice, which Joan performed in charity, for love of Jesus, hers is a beautiful example of sanctity for lay people involved in political life, especially in the most difficult situations”.

No shortage of opportunities there.

Which is what makes her a model for public officials today.

She’s been one of the great historical women I’ve followed with a new interest in recent years, one who’s made an impact on me and my work.

I was happily surprised to see a chapter devoted to her in Profiles in Audacity: Great Decisions and How they Were Made by Alan Axelrod.

Axelrod notes that Mark Twain, who was capable of penning acid observations, “wrote adoringly of Joan.”

“There is no blemish in that rounded and beautiful character.” He thought so highly of her that, in 1896, he devoted a long and rather tedious novel to the life of Joan of Arc. The author of Life on the Mississippi and Adventures of Huckleberry Finn, Twain believed his greatest work to have been Personal Recollections of Joan of Arc by the Sieur Louis de Conte, which few read during his lifetime and no one reads today.

As Profiles in Audacity notes…

Nevertheless, as Mark Twain and so many others have discovered, whatever else it may be, the story of Joan is an intensely human story. It is about the power of a decision.

What was that decision? “Joan decided to believe,” wrote Axelrod, and then he tells her tale.

Really, it is hard to imagine that it could have ended any other way. Joan of Arc’s is a story of what happens when a decision is built on faith and absolute conviction. It was not an easy decision for her to reach, and it came from nothing in her background or education…and even less from any inborn desire for glory. Once the decision had been reached, however, it became easier for Joan to decide to accept the mission she believed had been assigned to her. Driven by these cumulative decisions, she overcame the resistance of a world populated by the undecided and the unfaithful.

Benedict found in her a very timely reminder.

“With her shining witness St. Joan of Arc invites us to the highest degree of Christian life, making prayer the motif of our days, having complete trust in achieving the will of God whatever it may be, living in charity without favouritisms or limitations, and finding in the Love of Jesus, as she did, a profound love for His Church”.

Dr. Martin Luther King has been celebrated in the news lately. He had uncanny similarities.