With Australian unemployment rates rising to 6.3%, political debate is focused on the issue of jobs and how to create them. Yet the mainstream view of employment as the basis of our participation in the economy appears increasingly threatened by the near-future of automation.

A 2013 Oxford University study on the future of employment crystallised the issue, estimating that 47% of US employment is at risk from computerisation.  The rapid advances and decreasing costs of computerisation mean that nearly any routine task could potentially be performed faster, more accurately, and most importantly cheaper, thanks to advances in computing, AI, and cloud-based data and software.

Until recently, our collective narrative around automation and employment has been quite comforting: we see automation taking away intrinsically undesirable industrial, repetitive, and unskilled jobs, while we are encouraged to pursue more skilled, more creative, and more fulfilling forms of employment. Our current understanding of automation complements our long-standing expectations around self-advancement and the evolution of employment, where the children of blue-collar workers have the opportunity to become tradesmen, white-collar workers, to join the professions, or otherwise reap the benefits of higher education through more highly skilled forms of employment.

But these higher echelons of employment – the kinds of jobs to which we or others are supposed to aspire – are as vulnerable to computerisation as the factory line.  This is what has readers and editors of magazines like Forbes, Fortune, and The Atlantic sounding a little Luddite.

Take accounting and law, for example. These two professions are almost as old as civilisation itself, and have been viewed as reliable, well-paid, and (lawyer jokes aside) respectable occupations for generations.  But as a 2011 New York Times article entitled “armies of expensive lawyers, replaced by cheaper software” explained, so-called “e-discovery” search engines are already streamlining the tortuous process of reviewing huge quantities of potentially relevant documentation. It’s not just reading documentation: automation of document creation is set to make legal practices faster and more efficient as well. As one lawyer explained: “It’s not a particularly difficult matter but before automation it was a 45-minute process. Now it’s a simple 10-15 minute process to type the data in once and the software automatically fills out all of the forms which we then review.”  In addition to automation, outsourcing data-entry can save the same practice even more time and money.  On an individual basis this gives early-adopting practices a competitive edge. But in the long term greater efficiency translates into less work for lawyers.

New cloud-based apps like Xero, Freshbooks, and Quickbooks Online are set to make accounting and bookkeeping a whole lot more efficient too, with the software allowing end-users to digitally manage their business data from beginning to end from the convenience of their smart-phones. User-friendly apps not only eliminate the more tedious and messy aspects of keeping accounts, they also shift work onto the end-user. Accountants will still be required, especially for higher-level advice, but the quantity of basic, graduate-level work will diminish. As accounting news and information site AccountingWeb observed, “giving consumers a way to do something effectively themselves for cheaper, and with ease, is a recipe for a paradigm shift.”

Speaking of news, even journalism is taking a hit from automation, with Associated Press now producing thousands of automated financial and sports reports. Granted, this is the kind of work that “makes most reporters want to poke their eyes out with sharp objects”, and no journalists have lost their jobs to what is, by all accounts, a cheaper, faster, more efficient, and more accurate AI alternative. Instead, the new technology is depicted as “freeing up writers to think more critically about the bigger picture”, which may include the future of employment for journalists already under pressure from changing habits of news consumption.

Some examples of automation are more striking than others. It seems clear, for example, that the rise of driverless vehicles will dramatically change our relationship with transport, with predictions that many people will cease to own a car, that the total number of cars in circulation will decrease dramatically, and that a host of associated jobs from mechanics to parking inspectors will likewise decrease or vanish entirely.

But many aspects of automation are quiet, unimpressive, and unspectacular, conforming to the ideal of technology that takes away the most menial of tasks, like manually typing in details from hard-copy documents and forms, manually sorting invoices and receipts, printing and mailing checks, and manually checking inventory.  As an article predicting the demise of bookkeepers notes: “Since 2004, the median number of full-time employees in the finance department at big companies has declined 40%”.

It is this predictable side of automation that lends credibility to the augurs of employment doom. Does your job involve repetitive manual or cognitive tasks? Can those tasks be broken down into a series of rule-based steps? Given that computers are now capable of driving a car in increasingly complex conditions, how many of the tasks you are paid to perform could be automated instead?

Don’t be too confident in your self-assessment: as various commentators have noted, even the supposedly complex, non-routine work of middle-management can be engineered away.

Foxconn, the Taiwanese manufacturer whose products include Apple iPhones, has a factory in China that is entirely automated and can operate 24 hours a day with the lights off. The workers displaced in this gradual perfection of the industrial revolution are supposed to move onto bigger and better things.  But if the more highly skilled white-collar jobs are also being squeezed by automation, will there truly be enough jobs to go around?

In every field, the defence against automation is to lean into the “higher skilled” aspects of the job, but surely there are limits to the number of business analysts the world needs? The top of the employment pyramid is narrow for a reason: there’s only so much highly skilled analysis and input required to run a business.

Others are more optimistic about the human capacity to find new forms of work, or the yet unthought-of industries that will arise to take advantage of new technologies including automation.  But even so, it is hard to imagine automation enabling the kind of large-scale employment of the past.  As a New York Times article from 2012 argued, new technology has already led to a “decoupling” of productivity from jobs growth. 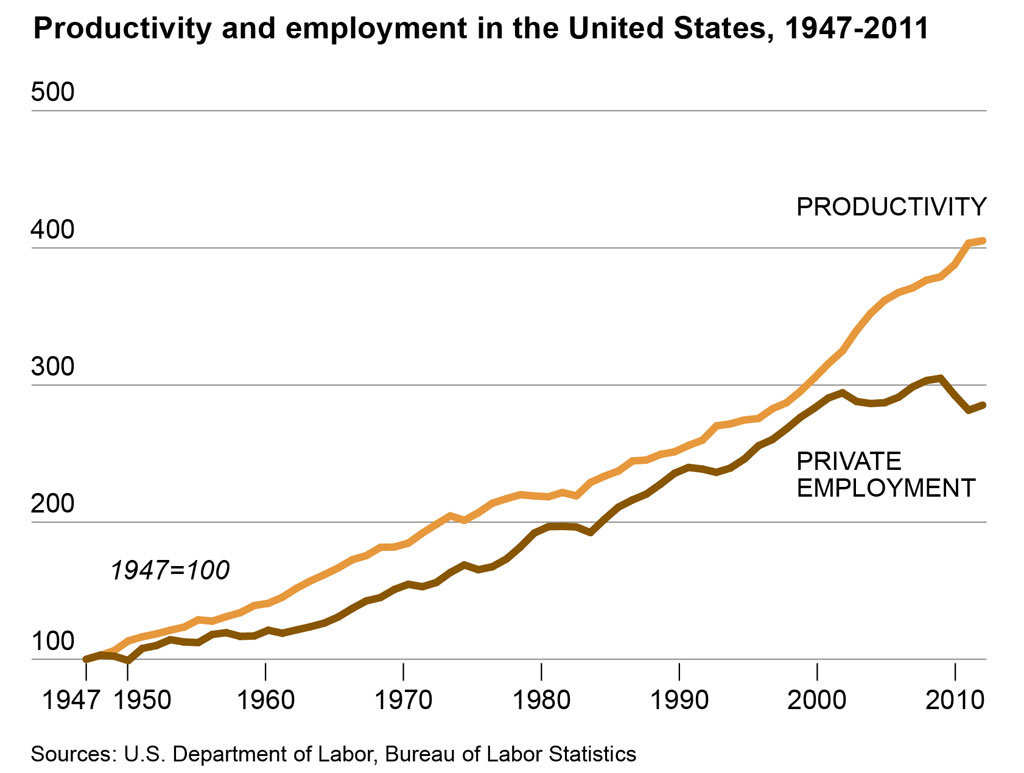 Imagine how that graph might look with the automation of whole swathes of the transport industry for example, with taxi drivers, truckies, and delivery drivers made obsolete.

If we accept the inevitability of automation, the real questions surround the shape of the future economy as fewer and fewer people can find substantial employment. On the one hand, automation observers like Martin Ford argue that some kind of income redistribution will be necessary to maintain the consumption that lies at the heart of our present economy.  A guaranteed minimum income regardless of employment status will ensure that demand for increasingly automated products remains high.  Or to put it another way: “Yes, they can make robots that replace workers, but until they make robots that buy the useless crap they produce, I don’t see much point.”

Others argue that the trend will be towards increasingly “artisanal” and creative forms of part-time employment or craftsmanship, with people seeking to make a living from a collection of pursuits with a renewed emphasis on local communities.  Nor are the two approaches necessarily exclusive: a small stipend or minimum income could be supplemented by various small-scale entrepreneurial and freelance activities. Advocates of this boutique approach also point to the opportunities provided by new technologies such as 3D printing, which could in theory see us one day choosing between custom-made electronics from local craftsmen and mass-produced devices from vast overseas automated factories.

The idea of income redistribution will be alarming to many people, but it is at least theoretically possible to imagine a future in which capital has so circumvented human labour that the normal channels of wealth distribution no longer function. A minimum income could be necessary not only for the livelihood of the unemployed but for the maintenance of the whole economy.  In a feudal system, the nobility and the crown monopolise land-ownership, leasing this basic necessity to the peasantry and providing a measure of protection in exchange for a contribution of labour. Could we end up with an analogous system where major corporations contribute to the basic financial sustenance of the unemployed masses in exchange for keeping the consumer economy going?

It’s hard to imagine.  Not least because work is a basic human good, and to subsist on unearned income in the long-term is unfulfilling.  Perhaps what we need more than a guaranteed minimum income is to stand back and think critically about the whole notion of an employment-based economy in the first place.  We might look down on our peasant ancestors, but at least they had the dignity of working primarily for themselves, meeting their own needs directly through their own labour rather than contracting out their labour for wages.  And according to some historians, our peasant ancestors worked shorter days and had many more holidays than we do today.ⁱ

For how many generations has your family been in employment? The phenomenon of total financial dependence on the selling of one’s labour is relatively new, and if the corresponding culture of hating one’s work is anything to go by, it is by no means the ideal system. Indeed, one thing we can glean from the rise of automation is that it excels in removing the mundane, repetitive, and routine tasks. Many accountants and lawyers are no doubt quite happy to earn professional rates for sorting documents and entering data, but those of us who don’t work in protected professions won’t be sorry to see these tasks go.

The bottom line of work is to sustain oneself and one’s family, and the requirements of such labour are finite.  To be able to meet some of these requirements directly is healthier and more satisfying than the indirect method of selling our labour and using wages to buy everything we need, and many more things we don’t need.  People dream of winning the lottery and giving up their “wage-slavery”, but the same outcome can be achieved to varying degrees by limiting our expenses and doing more to sustain ourselves directly.  If we can get past the idea that full-time employment is the only means of sustaining ourselves in the economy, then the future of automation may be less of a threat than an opportunity.

ⁱ News reports of research into peasant life in England assert alternatively that peasants had a leisurely working life but a terrible diet, or that peasants had an excellent diet but worked terrible hours. Sensationalist accounts of grotesque, short, and short-lived medieval peasantry should be treated with caution, as evidenced by instances such as the Towton dig.