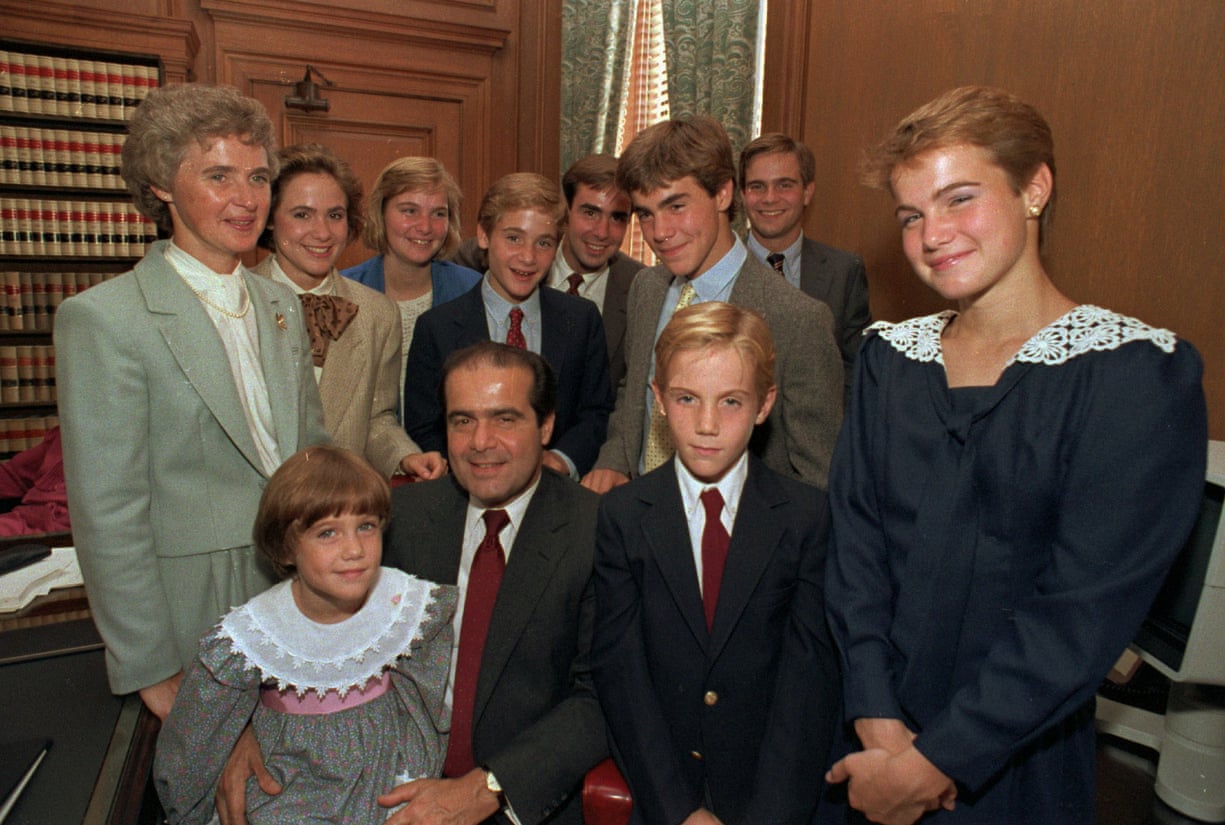 Antonin Scalia with his wife, Maureen, and children before his swearing in as a Justice of
the US Supreme Court in 1986. Photograph: Bob Daugherty/AP via The Guardian

In his remarks upon the shocking and unexpected death of Supreme Court Justice Antonin Scalia, President Obama paid tribute to his many professional accomplishments, but he ended his statement with a comment on Scalia’s personal life. He remarked on Scalia’s “loving family,” which he called “a beautiful symbol of a life well lived.” And he thanked them “for sharing Justice Scalia with our country.”

Indeed, there was much sharing to be done, as Scalia was the father to nine children and grandfather to thirty-six. Revered on the right, and respected on the left, Justice Scalia was considered by many on all sides of political issues to be one of the greatest legal minds of his day, possibly in American history. Most of the coverage of his life has focused on that or on the brewing political storm that will inevitably surround the process for eventually replacing him.

But amid all that, we should not lose sight of what Justice Scalia had to teach us about the family. Here are seven lessons we can draw from his full and vibrant family life:

1. Family is an accomplishment in its own right. It was actually Justice Scalia’s wife, Maureen, who responded to the question in a CBS 60 Minutes interview, “Why so many children?” by joking that she and her husband are “both overachievers.” Her joke contained an important point: raising a family is noble work, and children are a magnificent accomplishment. Mrs. Scalia’s answer was brilliant; she matched him by placing the work of childrearing on par with sitting on the highest court in America.

No doubt, she and Justice Scalia would agree with what Leon Kass put so magnificently in a 2012 speech to the American Enterprise Institute, when he said:

We human beings are at work not only when we are occupationally working. We are also deeply at work in the activities of love and friendship, and especially when we are actively engaged in family life, the domain of private life in which Americans find the most meaning.

Couples like the Scalias help today’s couples to re-think the meaning of work in their lives by reminding us that a couple’s most intimate and important work is to build a family.

2. You don’t need to be over-involved. Despite having nine children, Justice Scaliasaid he “didn’t go to the soccer games and the piano recitals and things.” He said, “You know my parents never did it for me. And I didn’t take it personally. ‘Oh Daddy, come to my softball game.’ No, I mean, it’s my softball game. He had his work. I got my softball game.” He turned out just fine, as did his own children, who count among them multiple lawyers, a poet, a priest, and a lieutenant colonel in the Army. Helicopter parents, take note.

3. Children are not an impediment to success. Admittedly, the pull between professional aspirations and raising a family looks different for men and women, but these days, the notion that kids are a drag on career is a line doled out without any gender discrimination. In fact the opposite has been found for men: having children correlates with higher earnings for men if they share a household, and one study found that men with children are the most sought-after job applicants.

4. It matters who you marry. The findings that a man’s career is often boosted by having children requires an important caveat: it also depends on that man’s wife. It’s important to marry someone who views the marriage as a partnership, both the professional and the personal aspects of it, and Justice Scalia clearly chose a woman who was his match. They met while he was a Harvard Law School student, and she was a student at Radcliffe, which was the women’s arm of Harvard at the time. Their shared faith, intellect, and commitment to certain issues in the American political and legal realm gave them a strong foundation for a long and happy marriage. Of his wife, Justice Scalia once joked that, “[Maureen] says she could have married so-and-so… And of course the reason she didn’t was that ‘so-and-so [was] wishy-washy.’” To which she replied, “This is absolutely true. He will say, ‘You would have been bored.’ I say, ‘Oh, that’s right!’ I would have been bored.”

5. Have a sense of humor. It’s impossible to imagine a boring moment with Justice Scalia, who will be forever remembered for his wit and humor. His sense of humor did not stop with his family. He famously joked, “In a big family the first child is kind of like the first pancake. If it’s not perfect, that’s OK. There are a lot more coming along.” An ability to laugh seems a prerequisite for having a large family, or a family of any size, which is bound to run into road bumps along the way.

6. Faith matters. Justice Scalia and his wife shared a commitment to their Roman Catholic faith. He ardently defended the important role that religion plays in public life, but he was also clearly committed to nurturing it in his private life. His faith shaped his family culture, about which he once said, “We had our own culture. The first thing you’ve got to teach your kids is what my parents used to tell me all the time: ‘You’re not everybody else. We have our own standards and they aren’t the standards of the world in all respects, and the sooner you learn that the better.’” Faith offers a family cohesion around which to build that culture; it clearly did for the Scalias.

7. We are not bound by our own childhoods. Little attention is given to the fact that Justice Scalia was an only child. He grew up with no siblings or cousins. And yet he leaves behind a very large family. He a reminder of the human freedom we have in forming families of our own, and he and his wife are an example of great generosity with that freedom.

The life of Justice Antonin Scalia leaves an enormous mark on so many aspects of American public life. The noble family life he lived ought to be included in the list of qualities that make him a man worth emulating. His family is indeed a symbol of a life well-lived, one we can all aspire to.

Ashley McGuire is a Contributing Editor at the Institute for Family Studies, where this article first appeared. It is republished here with permission.

Read the original article at IFS

Ashley E. McGuire is a Contributing Editor at the Institute for Family Studies, a Senior Fellow with The Catholic Association, editor-in-chief of AltCatholicah, and the Richard John Neuhaus Fellow at the... More by Ashley E. McGuire