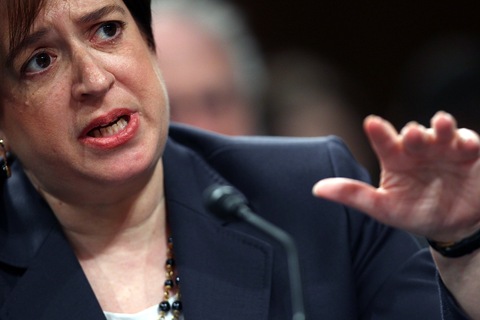 There’s no question Elena Kagan will be confirmed by the Senate to serve on the U.S. Supreme Court. But there are plenty of questions about her political ideology and its likely influence on the Court, questions she either dodged artfully, or ones that weren’t asked at all during that show they called a ‘hearing’…

The Chicago Tribune editors called it “Pointless” and there’s no disputing that.

She deflected every attempt to get her to reveal how she may come down on the great issues that await her on the court.

Ever since 1987, when Robert Bork participated in a stimulating discussion of his distinctive approach to constitutional interpretation — only to be rejected by the Senate — appointees have chosen to give their questioners as little information as possible, as pleasantly as they can. Senators have taken the opportunity to give long-winded speeches in the guise of questions for the nominee, to show how wise the senators are.

Especially those in the majority party, who know this is a slam-dunk anyway so they use the time for grandanding and soliloquy.

Senators would be far better off ransacking their writings, speeches and judicial opinions (if, unlike Kagan, they have served on the bench) for illuminating clues.

Actually, some did. And they tried to confront Kagan with her writings and political interventions in such consequential matters as partial-birth abortion. Though the ‘hearing’ process allowed her to evade the issues, she can’t and shouldn’t escape the scrutiny they raised.

Add pro-life Nebraska Sen. Mike Johanns to the list of lawmakers in the Senate who are officially opposed to the nomination of pro-abortion activist Elena Kagan to the Supreme Court Johanns joins several Republican colleagues who say Kagan is too much of a judicial activist to merit confirmation…”As an advisor to the Clinton administration, Ms. Kagan led the fight to keep partial-birth abortion legal. She even went so far as to insert her own personal beliefs in the place of science—extremely disturbing given the horrific nature of partial-birth abortion,” he said.

“When the Supreme Court struck down Nebraska’s ban on partial-birth abortions in 2000, it backed up its decision with language from a purportedly non-partisan physicians’ group. Yet it has been reported that the critical part of that statement was not written by doctors, but by Elena Kagan, who at the time was a White House policy adviser to President Clinton,” Johanns explained.

This support for a “monstrosity”  is enough to disqualify her for the highest court in the land, some are saying. And some it can’t be said enough…

The Washington Times released an editorial column today on the nomination of pro-abortion activist Elena Kagan to replace retiring Justice John Paul Stevens on the Supreme Court. The Times says Kagan’s supporting partial-birth abortion (infanticide) should be the “kiss of death” for her nomination…

The Times’ editorial staff is not surprised Obama would pick an abortion advocate who is credited with helping keep partial-birth abortions legal for years more as “this nomination is in tune with President Obama’s career-long devaluation of human life.”

The paper says Kagan “may be more responsible than anyone for keeping partial-birth abortion legal for an extra decade.”

When the Clinton White House considered legislation to make partial-birth abortions illegal, the American College of Obstetricians and Gynecologists (ACOG) reported it “could identify no circumstances under which this procedure … would be the only option to save the life or preserve the health of the woman.”

The Times points out Kagan pronounced this news a “disaster” because “it could give Mr. Clinton reason to restrict partial-birth abortions. She then set to work convincing ACOG to add a sentence making the practice seem more reasonable. Courts later quoted that sentence in deciding bans on the procedure were unconstitutional.”

The magnitude of her involvement in making partial-birth abortion accessible is enormous. But that didn’t matter to the majority on that hearing panel…

Senators asked Kagan about the memos during Judiciary Committee hearings and she explained her actions away by saying she wanted to help ACOG form a more accurate opinion.

After citing her role in lobbying the medical organizations, the Times says senators need to keep this in mind when they vote.

“Democratic senators who harp about ethics – such as Pennsylvania turncoat Arlen Specter and Wisconsin Democrat Russ Feingold – should take offense at Ms. Kagan’s serious fudging under oath. Senate Democrats who claim to oppose partial-birth abortion – such as Nebraska’s Ben Nelson, Arkansas’ Blanche Lincoln and Nevada’s Harry Reid – should be held to account if they vote for her,” the Times wrote.

Which is why politicians aren’t exactly rushing to admit it.

And until they do, some keen observers like these ones at the WSJ are giving them the chance – and the nudge – to ask the right questions. Keen insight here…

…there’s some crucial unfinished business the Senate should insist on before voting on her nomination to the Supreme Court. To wit, she ought to recuse herself from participating as a Justice in the looming legal challenges to ObamaCare.

In response to Senate queries, Ms. Kagan has said she’ll recuse herself from participating in 11 cases on which she represented the government in her current job as Solicitor General. The challenge to ObamaCare isn’t one of them, though the cases brought by Florida and 20 other states were filed in March, well before President Obama announced her nomination on May 10.

Ms. Kagan was never asked directly at her hearings about her role as SG regarding the health-care lawsuits. The closest anyone came was this question from Oklahoma Republican Tom Coburn: “Was there at any time—and I’m not asking what you expressed or anything else—was there at any time you were asked in your present position to express an opinion on the merits of the health-care bill?”

Regarding a potential recusal, that’s not the right question. Ms. Kagan was unlikely to have been consulted on the merits of health-care policy, and even if she did express an opinion on policy this would not be grounds for recusal. The legal precedents on that are clear.

Recusal arises as a matter of judicial ethics if as a government official she expressed an opinion on the merits of the health-care litigation. This is what she would have to render a judgment on were she to be confirmed for the High Court. It is also the question on which she is likely to have participated given her role at the Justice Department.

This is an incisive piece. Read it carefully, and consider…

Ms. Kagan would sit as Mr. Obama’s nominee on the nation’s highest Court on a case of momentous Constitutional importance. If there is any chance that the public will perceive her to have prejudged the case, or rubber-stamped the views of the President who appointed her, she will damage her own credibility as a Justice and that of the entire Court.

If the damage hasn’t already been done…