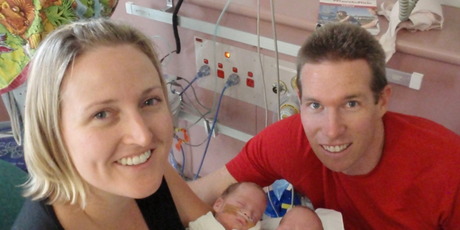 Here is a great story from Australia – via New Zealand. It happened two years ago. One of twin babies born at only 27 weeks gestation was declared dead after doctors at Sydney Hospital fought for 20 minutes to save his life. They passed the baby to his mother, Kate Ogg, and she placed him on her bare chest to say goodbye. What happened next amazed everyone.

“We didn’t want him to hear us crying while he was dying, we wanted him to hear our voices so we started talking to him quietly, telling him his name and that he had a sister,” Mrs Ogg said.

“Next thing he’s gasping more regularly and starting to move and cry.”

After Jamie started gasping more regularly and took breast milk off Mrs Ogg’s fingers, she and husband David had to persuade the doctor to come back to look at him.

But once in the room, he started explaining to the couple how Jamie had died. “And we’re saying, ‘Okay, so when he’s breathing it’s just a reflex?’. And he’s like, ‘Yep, you’re not seeing what you think you’re seeing.”‘

After two hours the shocked couple had stopped believing what the doctor said and told him Jamie was not dead.

When I pulled him off my chest he was startled and waved his arms around and tried to cry again, and the doctor goes ‘oh s***’.”

Not surprisingly Jamie’s startling recovery turned Mrs Ogg and her husband David into strong advocates of what is called — Down Under anyway — “kangaroo care”, the skin on skin contact with its natural warmth that they believed saved their baby’s life. You can read more about it in the NZ Herald story.

The Oggs, who now live in New Zealand and have a third child (who also tried to come very early), had a great attitude to possible brain damage from Jamie’s struggle for life.

“David and I always said to one another if there’s anything wrong as a result of this we’ll deal with it when it happens. If there’s nothing wrong we’ve wasted our time worrying, and if there is, worrying wouldn’t have helped anyway.”

Sometimes everything works out right.