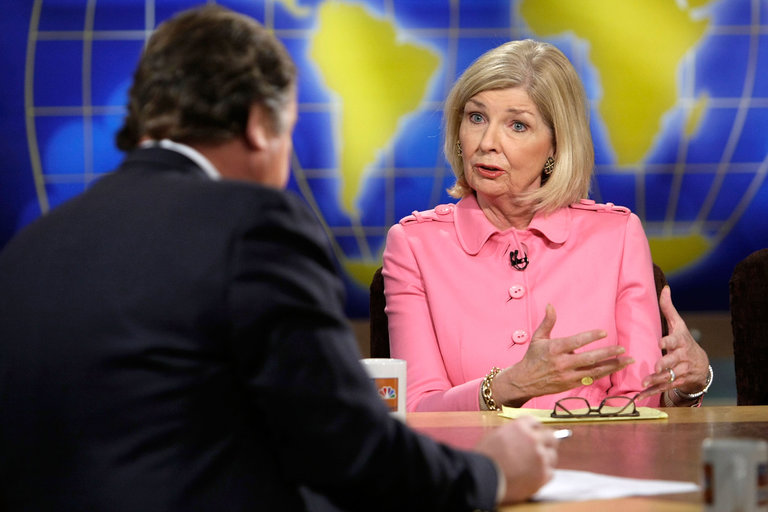 We take great public figures for granted. Several days ago, we lost an icon who wouldn’t have been comfortable at all with that idea nor the praise and accolades that have poured out since she passed into eternal life last Sunday.

The tributes round out the full Kate, they each offer something personal and special and sweet about a woman who teaches us as much now in those tributes as she did while writing, appearing on television in a special news roundtable series, and cramming her impressions and very candid remarks about the radical feminist agenda into her book about it all, completely unafraid of any consequences of doing so, fearless as she was and wants women to be now.

Women need to be that now.

When Kate’s book came out, I had the chance to discuss its contents with her a couple of times on my radio program, and she instantly made me feel like a longtime friend of hers, so easygoing and friendly was our conversation, so lively and engaging. She listened well and responded thoroughly and with robust insights and personal experiences and opinions on feminists who were hurting society, deeply.

From the jacket cover to the first page to the last, Kate O’Beirne called out Women Who Make the World Worse, and “their radical feminist assault” on schools, families, the military and sports world. And that was in 2006.

She set the reference point for this assault in the early 70s battle in the US over the Equal Rights Amendment, a huge political and social battle long forgotten or never known by younger liberal activists today.

At best, the sweeping social and legal effects of the amendment were unknown, at worst its deceptively simple language would impose a rigid sex sameness in every facet of American life.

Kate had it exactly right when she noted “A battle was won when the ERA was defeated, but feminists went on to win the war.” Her book recounted how, and the ground they gained by 2006.

But she knew in the early going how they worked, and how to work around them.

At St. Mary’s Girls’ High School…I was active in speech and debate and we regularly competed against both boys’ and girls’ teams. Sister Kateri, the nun who coached our team, trained us to go in for the kill. My parents wholly approved of the verbal combat. “you enjoy arguing; maybe you ought to be a lawyer,” my father would suggest.

Her wit in law school earned her scorn and rebuke by feminist classmates.

[An] incident revealed how the women’s movement would operate My friend was enforcing the monolith that holds that women all have to think and act alike I was being told that we were not individuals to be judged separately but rather representatives of an oppressed class defined by a group identity. When feminists complain about the alleged glass ceiling, think about which of these two women students you’d rather work with. Someone who didn’t take herself too seriously or a humorless, prickly pioneer dragging the weight of women’s historical oppression around with her? Today, the world has been made worse because these humorless, prickly pioneers are winning.

In retrospect, she said, what feminists failed to achieve in the “one fell, ill-considered legislative swoop” of the ERA was “downright modest compared to their later success in re-shaping every facet of American life…

The changes they couldn’t impose by constitutional amendment they have imposed through the schools, college faculties, and the culture, by judicial fiat and advocacy dressed up as legislation.

But she was only getting started.

First, these women are chronically dissatisfied. And most radical feminists are qualified for only one job, professional feminist….They are generously paid, largely by taxpayers, but also by corporations anxious to look good on the “women’s issues,” to be feminist theorists, academics, counselors, consultants, trainers, and advocates. They review textbooks and train teachers to erase those gruesome sex stereotypes, they conduct sexual harassment workshops for nervous corporations, they counsel cops and judges on domestic abuse, they “mainstream gender values” into college curriculums, and they advocate for women’s rights at a network of feminist organizations.

These women sit on review panels to give federal grants to each other, to study things only they care about. Every new federal law they design, aimed at addressing some inequality they identify, based on studies they’ve written, comes with hundreds of millions of dollars in feminist pork spending.

…their demonized enemy proved to have no stomach for the fight…The shrill feminists who made men the enemy took shrewd advantage of the fact that men hate arguing with women.

Because radical feminists specialize in a moral intimidation that declares men guilty as a class, other women have to take on the women who make the world worse.

And she did, with such wit and clarity and unassailable truth, it’s remarkable few have the will to venture into this type of challenge of prevailing truth claims.

Kate O’Beirne held fast to truth, and received wisdom, and she paid tribute to it at the start of her book.

Without the women in my life who make the world better, this book would not have been written…To have sisters is to have best friends for life.

The other group of Sisters to whom I owe so much taught me from kindergarten through college. These Catholic nuns were women of character, compassion, and courage. They devoted their lives to the education of young women and provided a daily example of the feminine genius they fervently believed in and prayed we would come to prize. It was inconceivable to them that the young women in their charge weren’t the equal of any man. They recognized that we had strengths to complement the masculine attributes of the boys in our brother school around the corner.

Kate was a gem, a daughter, sister, student, wife, mother, friend, mentor, teacher, witness and caretaker. She got as good as she gave, the appreciation of her gracious service. May she rest in peace.