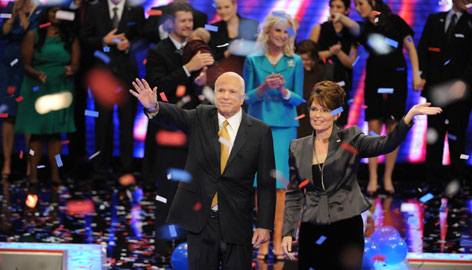 The parties are over, in one sense.

But the Democratic party last week and the Republican party this
week have defined their stake in this election at their conventions,
and it all wound up tonight with John McCain’s acceptance speech. How did he do in the wake of the Sarah Palin tidal wave?

He said his running mate, Alaska Gov. Sarah Palin, is “just the right partner” to help lead the change.

“She’s tackled tough problems like energy independence and
corruption,” he told the Republican National Convention. “She stands up
for what’s right and she doesn’t let anyone tell her to sit down.”

He added, “Let me offer an advance warning to the old, big-spending,
do-nothing, me-first, country-second Washington crowd: Change is
coming.”

In a speech before a giant screen showing an American flag waving
against a blue background, McCain talked about the economy and
education and promised to put the people first.

The education issue was especially effective, with McCain calling it the number one civil rights cause of the times.

But the word of the night was ‘fight‘.

“Fight with me. Fight for what’s right for our country. Fight for the ideals and character of a free people.”

As for the fight with Barack Obama, McCain struck a respectful note.

“There are big differences between us. But you have my
respect and admiration. Despite our differences, much more unites us
than divides us. We are fellow Americans,” said McCain, a senator from
Arizona.

While Obama seized the opporunity to appear on Bill O’Reilly’s Fox News show before the Republican convention prime time coverage began. On which he admitted the Iraq surge has had great success, though he wouldn’t admit he was wrong about it not working. It’s two weeks of political theater.

The culmination was this speech by McCain.

We’ll be hearing plenty more about the battle at hand, the fight for life, in battle ground states, over the next two months. It has already begun.