In a highly personal approach to the problem, he announced that he would personally baptize and become godfather to any third or subsequent Orthodox child born to a married couple in Georgia and formally registered with the government, according to economist Lyman Stone in a fascinating article at the Institute for Family Studies.

While such an incentive might be ineffective in many countries, Georgia is almost 90 percent Georgian Orthodox and Patriarch Ilia II is widely trusted and respected.

Many countries around the world are introducing financial incentives to encourage more births, with mixed results, but the Patriarch’s appreciative and valuing approach has proven highly successful.

Since the first mass-baptisms in late 2007, Ilia has baptized over 30,000 babies and caused a sharp spike in births, as depicted in the graph below: 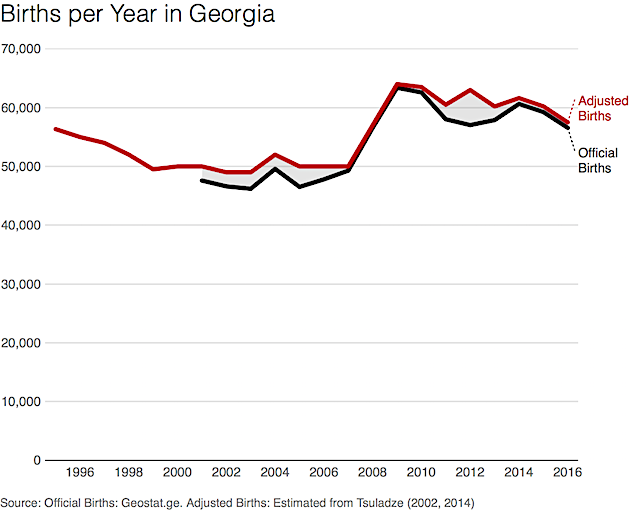 Before Patriarch Ilia’s policy, Georgia had below-replacement fertility. After the mass baptisms began, the fertility rate rocketed to above-replacement level and has stayed there for nearly a decade.

In particular, third-order births nearly doubled between 2007 and 2010, and then continued to rise over time.  The entire observed fertility increase also occurred among married couples, to whom the honour was offered, while unmarried childbirth actually fell.

It’s not all about money: cultural capital counts

The divergence is so large and persistent that, combined with the birth-order data shown above, it seems extremely likely that much of this jump was due to Patriarch Ilia’s offer of baptism, writes Stone.

In an interesting twist, in 2013 Georgia also greatly expanded its financial incentives for childbearing. While these had some effect, they were not as effective as the encouragement from the beloved religious leader.

All this strongly suggests that national leaders can use social or cultural capital to effect targeted social changes – in the case of Georgia, accompanied by a comparatively low price tag.

Admittedly, it is difficult for other governments to emulate such a successful approach; Georgia is unique in that Patriarch Ilia had the personal cachet (respect) to inspire such a change.

Yet culture undoubtedly impacts family size and how women feel about motherhood in all countries.  The idea of honouring big families isn’t new; a number of current and historical leaders have utilized this approach to increase birth rates.  For instance, in 2008 Russia established a special prize called the “Order of Parental Glory”.  Parents with seven or more children (biological or adopted) are invited to the Kremlin and receive the medal from the president himself.

While all societies are not as homogenous as Georgia, there are always subgroups to which various respected institutions matter.  Such institutions include workplaces, churches, the attitudes of doctors, and social organisations.

Questions we might ask of our own cultures include:

Questions such as these indicate policies that are likely to drive fertility trends as much, if not more than, a few more dollars of government support — as the case of Georgia has shown – and at a much lower cost to the public purse.