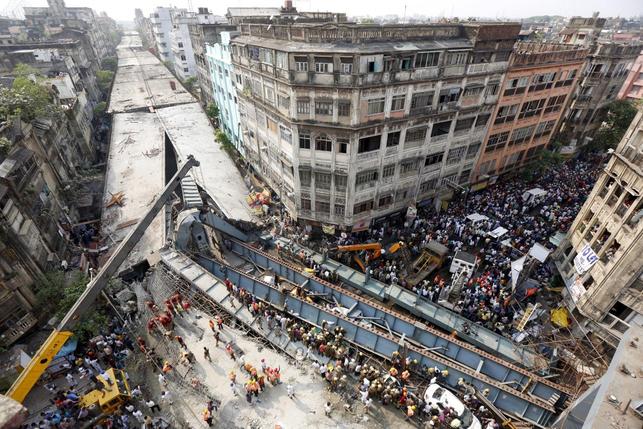 On Thursday, March 31, around noon, the busy Rabindra Sarani-KK Tagore Street crossing in the city of Kolkata, India (population 4.5 million) was crowded with shoppers and people having lunch in open-air eateries. Crowds that a Westerner would consider to be a mob scene are routine in the Indian subcontinent, and the density of street-level shops makes many thoroughfares almost impassable by automobile.

To alleviate this congestion, in 2008 the Hyderabad-based construction conglomerate IVRCL won a bid to construct an overpass that would carry vehicular traffic above the existing street. Construction began in 2009 and was due for completion in 2012. But the firm ran into financial and land-acquisition difficulties, with consequent project delays, and so last week one of the last parts of the projected 2+ kilometer-long overpass was still under construction above the street.

By Wednesday, March 30, a long straight section of the overpass was complete, and concrete was poured that night for a section next to a turn at the crossing, where steel girders already were suspended above the road. At about 12:25pm on Thursday, some 300 feet (100 meters) of the overpass collapsed onto the street below. As of April 2, the death toll stood at 27, but more were missing and over 100 people were injured.

While the cause of the collapse is under investigation, the IVRCL firm has been charged with culpable homicide and three members of the firm have been arrested. This is after one firm representative termed the collapse “an act of God.”

The construction phase of any large civil-engineering project is fraught with hazards that only good planning and expert supervision at all times can avoid.

As a civil-engineering professor interviewed about the tragedy pointed out, right after a poured-concrete structure is set in place, the weight of the newly poured material must be supported by temporary scaffolding before the concrete sets. In contrast to the finished product, which office-based engineers can design at their leisure to withstand known stresses, temporary scaffolding is erected onsite in an ad-hoc way, and may have hidden defects that would require more engineering knowledge to avoid than the onsite construction workers and supervisors have. It was apparently one such defect that led to the disaster in Kolkata last week.

From videos shot during the collapse, it appears that few if any pedestrian or vehicle barriers were in place to keep people away from the construction site. Admittedly, this would have been difficult, like temporarily shutting down Times Square in New York City for construction.

And businesses on the street undoubtedly would have complained if large sections of the surface street had been blocked off, impairing access to some shops. But events have proved that the trade-off would have been worth it, if excluding traffic from under the most hazardous parts of the overpass during construction would have saved lives.

While some commenters on Indian news sites complained that such things are never allowed to happen in the so-called First World, only a year ago I reported in this space about a similar but smaller-scale accident involving overpass construction, right here in Texas.

While a prefabricated-concrete-beam overpass was being built over the busy I-35 freeway near Salado, Texas, a truck carrying an overheight load struck one of the beams before it had been firmly fixed in place. It shifted and knocked down several other beams, one of which killed the driver of a pickup truck. Again, this accident could have been prevented by diverting traffic from underneath the overpass, but the result would have been permanent miles-long backups on I-35 that might have provoked angry citizens to mount a protest march at the Texas Department of Transportation.

Any complex engineering project is a series of compromises with safety, expenses, schedules, personnel, and other resources all in the mix. In the West, a relative abundance of resources has led engineering organizations to err on the side of more money traded for more safety.

In India, as the comparatively poor track record of fatal building and construction collapses attests, getting the project done cheaply sometimes takes priority over getting it done safely. India is a democracy, and it may be that the current level of construction safety reflects an increased urgency to solve the nation’s civil-engineering needs faster and with fewer resources than Western-style engineering would allow.

It is bad enough when a privately-owned building collapses. But a public-works project such as an overpass inherently affects more people, and carries more potential for harm. This is why most public-works project specifications require licensed professional engineers to supervise the design phase. But the best designers in the world will be unable to prevent onsite accidents if the people who actually do the construction are not capable of understanding the hazards and engineering challenges involved.

At least three members of the IVCRF firm have been arrested in connection with the tragedy and charged with culpable homicide. The degree to which they are responsible is now going to be determined by the legal process, which may take months or years. Regardless of the fate of the engineers and managers involved in this accident, to prevent future tragedies like this a sea change will have to take place in the entire construction industry in India.

I have mentioned before a simple safety code that was once emblazoned on bronze plaques in Bell System telephone exchanges throughout the US: “No job is so important and no service is so urgent—that we cannot take time to perform our work safely.” That was back when the Bell System was a monolithic nation-like organization, and it could afford hundreds of bronze safety plaques.

But everyone working in a business that creates potential hazards for its own employees, and especially for innocent bystanders, can afford to make the Bell System safety creed their own. And something like this could go a long way toward making Indian construction sites and buildings safer places to be.