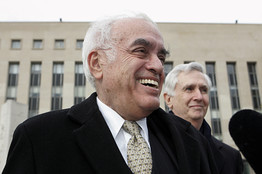 For all his years spent as a prominent Washington journalist with
incisive wit and insightful reporting, Robert Novak started getting
less public notice after he converted to Catholicism several years ago.
His passing this week went by largely unobserved. He would not have
minded.

After Novak’s conversion, he saw everything differently.

“When I started out, I didn’t have any agenda or tablet
of principles at all. But in the course of writing about things and
getting exclusive information, I might have helped certain causes,” he
once said in an interview.

“When we started the column, Rowly and I were neutral on abortion,
maybe leaning toward pro-choice. I began to read, think about it, and
by the time I embraced Catholicism, I was adamantly against abortion.
I’m happy that I moved in that direction,” he said.

Novak went on to say that he wish he had written more about the topic.

“I think I would have been better off to write about tax cuts and abortion and less about inside politics,” he said.

Good message. It came after a long career of writing exceptionally well about inside politics. The Chicago Sun-Times notes how Novak shared his wisdom with succeeding generations.

He was always eager to share his passion for public
policy and politics. In speeches to college graduation classes, Bob
distilled the essence of his years-long ruminations on America for
young people just starting out in life:

“Always love your country — but never trust your government!

“That should not be misunderstood. I certainly am not advocating
civil disobedience, must less insurrection or rebellion. What I am
advocating is to not expect too much from government and be wary of it
power, even the power of a democratic government in a free country.

“Ours is one of the mildest, most benevolent governments in the
world. But it too has the power to take your wealth and forfeit your
life. … A government that can give you everything can take everything
away.”

I remember when Novak explained the moment that began his
conversion, when a young woman on a college campus spoke with him after
his talk and asked him his views about God and religion. He was rather
tepid and noncommittal. She then said “Remember, Mr. Novak, life is
short. But eternity is forever.”